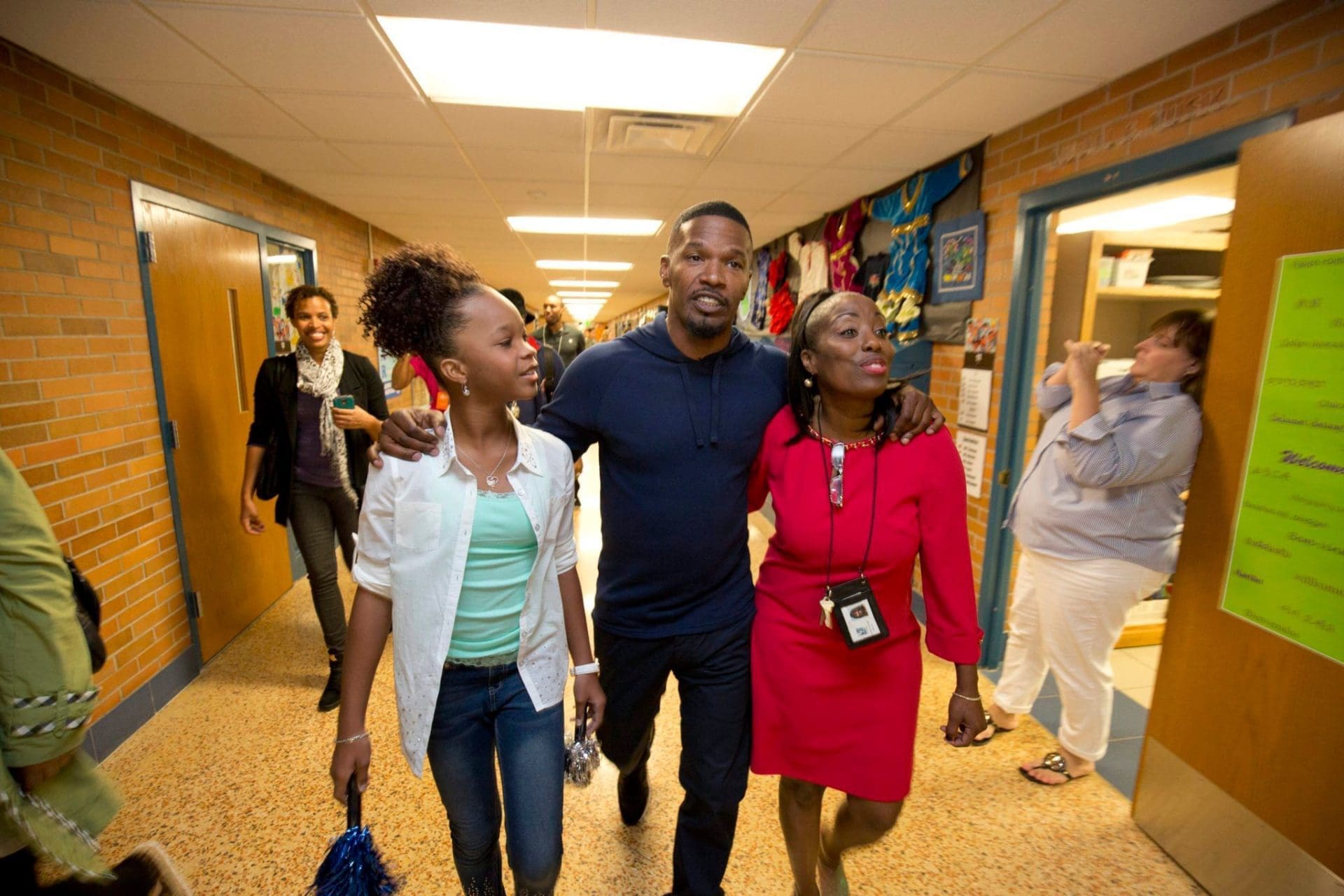 In advance of the release of the highly anticipated motion picture Annie, in theaters on December 19, 2014, Sony Pictures Entertainment is helping to support Turnaround Arts, a signature program of the President’s Committee on the Arts and the Humanities.  Turnaround Arts works with local program partners to provide intensive arts education resources to clusters of high-poverty schools across the country, leading to increases in attendance, academic achievement, and student engagement.  As part of a collaboration with Annie to promote arts education, Turnaround Arts will receive support, and Turnaround Arts schools who want to put on the Broadway classic will get resources and assistance in staging their production.

The initiative kicks off today in Minneapolis, where Jamie Foxx, Quvenzhané Wallis, and filmmaker Will Gluck visited Northport Elementary, a Turnaround Arts school, where they met the first-through-fifth graders and worked with students preparing to audition for their school production of “Annie.”

Commenting on the announcement, Margo Lion, Co-Chair of the President’s Committee on the Arts and the Humanities, said, “We are thrilled to be working with Sony Pictures and the new film of Annie, a truly beloved American musical, to get more arts education into the schools that need it the most. For any school, producing and performing a musical can be a memorable event.  For our Turnaround Arts schools, it can be transformational.  Students, parents and teachers get involved building sets, sewing costumes and rehearsing, and the whole community hums with excitement and expectation.  In schools that often struggle with low morale and low parent and student engagement, putting on a musical is a doorway into more teamwork and collaboration, and we are excited to be there with Sony Pictures and Annie as the curtain goes up on these efforts.” Jamie Foxx, who stars in Annie as Will Stacks, added, “Arts education is a way to make a real difference in the lives of kids everywhere.  Being involved with the arts certainly changed my life, and I’ve seen that engagement change the lives of many others.”

In addition, Quvenzhané Wallis, who plays Annie in the film, said, “I was excited to visit the school today. We had so much fun and I’m glad that they are preparing for their own production of ‘Annie.’ Every Annie can be different, which is one of the reasons why it is so great to be a part of.”

Additional photos may be found at www.sonypicturespublicity.com.

A Broadway classic that has delighted audiences for generations comes to the big screen with a new, contemporary vision in the upcoming comedy Annie.  Director/Producer/Screenwriter Will Gluck teams with producers James Lassiter, Jada Pinkett Smith & Will Smith, Caleeb Pinkett, and Shawn “JAY Z” Carter, Laurence “Jay” Brown, and Tyran “Ty Ty” Smith with a modern telling that captures the magic of the classic characters and original show that won seven Tony Awards. Celia Costas and Alicia Emmrich serve as Executive Producers.  The screenplay is by Will Gluck and Aline Brosh McKenna, based on the musical stage play “Annie,” book by Thomas Meehan, music by Charles Strouse, lyrics by Martin Charnin, and on “Little Orphan Annie,” © and ® Tribune Content Agency, LLC.  The film is from Columbia Pictures in association with Village Roadshow Pictures.

Academy Award® nominee Quvenzhané Wallis (Beasts of the Southern Wild) stars as Annie, a young, happy foster kid who’s also tough enough to make her way on the streets of New York in 2014.  Originally left by her parents as a baby with the promise that they’d be back for her someday, it’s been a hard knock life ever since with her mean foster mom Miss Hannigan (Cameron Diaz).  But everything’s about to change when the hard-nosed tycoon and New York mayoral candidate Will Stacks (Jamie Foxx) – advised by his brilliant VP, Grace (Rose Byrne) and his shrewd and scheming campaign advisor, Guy (Bobby Cannavale) – makes a thinly-veiled campaign move and takes her in.  Stacks believes he’s her guardian angel, but Annie’s self-assured nature and bright, sun-will-come-out-tomorrow outlook on life just might mean it’s the other way around.

Turnaround Arts is a program that uses arts education as a tool to help turnaround America’s struggling schools. Led by the President’s Committee on the Arts and the Humanities, together with national and local partners it brings high quality arts education resources to some of the lowest-performing elementary and middle schools in the country.