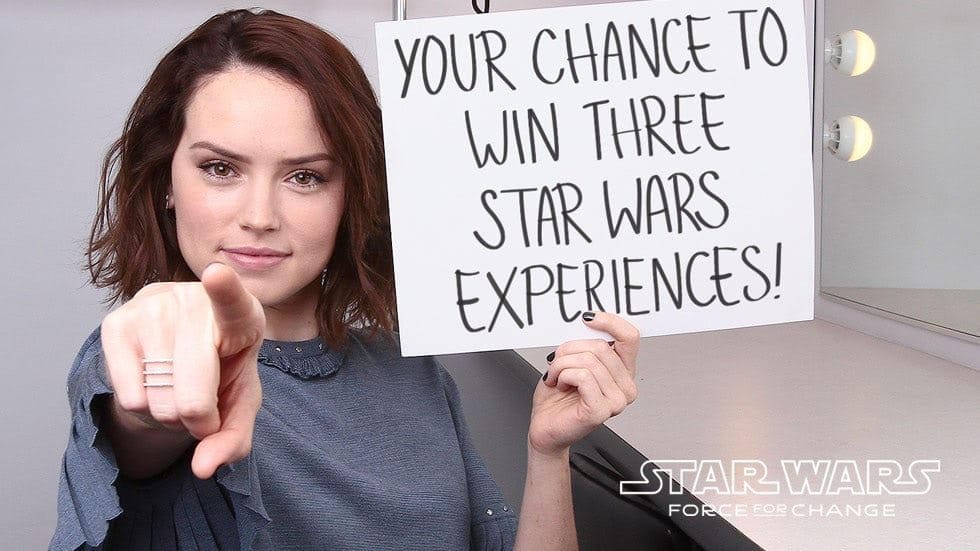 PRIZES INCLUDE A VISIT TO A STAR WARS MOVIE SET, TICKETS TO THE PREMIERE OF STAR WARS: THE LAST JEDI, AN OVERNIGHT STAY AT SKYWALKER RANCH AND MORE!

Star Wars: Force For Change in collaboration with Omaze will launch the Star Wars “Past, Present and Future” fundraising campaign to benefit UNICEF and Starlight Children’s Foundation. The campaign is themed around the timeless appeal of Star Wars, with experiences inspired by the saga’s past, present, and future. Lucky winners will receive prizes, like the chance to appear in the upcoming Han Solo movie, tickets to the world premiere of Star Wars: The Last Jedi, or, an overnight stay at the fabled Skywalker Ranch.

Over the course of four weeks between April 11th and May 11th, 2017, fans may enter at Omaze.com/StarWars for a chance to win these once-in-a-lifetime Star Wars experiences, with each week bringing a new prize to be awarded to a randomly-selected winner. Additionally, at the end of the campaign, one randomly selected grand prize winner will be awarded all three amazing experiences.

Since 2014, Star Wars: Force for Change and UNICEF have joined together to help improve the lives of children around the world. With the support of Star Wars fans, the collaboration has raised more than $9 million to help the world’s most vulnerable children. To date, Star Wars: Force for Change has helped UNICEF save the lives of over 30,000 children suffering from severe acute malnutrition through the distribution of over 4 million packets of Ready to Use Therapeutic Food Packets (RUTF) around the world.

“In a year that we celebrate 40 years of the Star Wars saga, I continue to be inspired by the incredible generosity and charitable efforts of our fans,” said Lucasfilm President Kathleen Kennedy. “We are so proud of their tireless dedication to positively impact the lives of children and others around the world, and hope this year’s Force For Change campaign will offer a few of those wonderful fans an experience they will never forget.”

Fans are encouraged to follow the campaign at Omaze.com/StarWars for exclusive updates each week.

NO PURCHASE NECESSARY TO ENTER OR WIN.  Void where prohibited.  Promotion begins 12:01 AM Pacific Time (PT) on April 11, 2017, and ends at 11:59 PM PT on May 11, 2017.  Must be at least eighteen (18) years old and a resident of an eligible domicile to enter and win prizes. Residents of Belgium, Bulgaria, the Czech Republic, Cuba, Iran, Iraq, Italy, Malta, North Korea, Singapore, Sudan, Syria, or Thailand are not eligible to enter. Sweepstakes consists of four (4) prize drawings; odds of winning a prize depend on the number of entries received for each drawing. For free entry: (i) send a postcard to Sponsor at P.O. Box 866, 9942 Culver Blvd, Culver City, California 90232 and write the following statement: “I have read and agree to the Star Wars: Force For Change Official Rules” and send by applicable mail date; or (ii) visit www.omaze.com/starwars.  Prizes that include being filmed in a movie scene do not guarantee that such footage will be included in the final movie. Travel and accommodations are at Sponsor’s discretion and subject to availability and change.  Winner and guest may be required to pass a background screening or security check to receive a prize and/or reward. Visa conditions may apply. All taxes are winner’s responsibility.

Rewards are separate from sweepstakes prizes.  Some rewards are limited in quantity. Not sponsored, endorsed or administered by, or associated with Facebook®.  Residents of certain territories may be required to successfully complete a trivia question to qualify.  For full sweepstakes entry requirements, methods & entry periods, prize details, a list of rewards and all limitations & restrictions, see Official rules at www.omaze.com/starwars.   Sole Sponsor: Omaze, Inc., P.O. Box 866, 9942 Culver Blvd, Culver City, California 90232. ABOUT STAR WARS: FORCE FOR CHANGE

Star Wars: Force for Change, a charitable initiative from Lucasfilm and Disney, harnesses the strength of Star Wars to empower and improve the lives of children around the world. Born in 2014, it was inspired by Star Wars fans, and the countless hours they have dedicated to philanthropy over the past four decades. To date, over $13 million has been raised for charitable causes around the world on behalf of Star Wars: Force for Change, including

$9 million towards UNICEF’s programs to put children first. This year, Force for Change is proud to announce Starlight Children’s Foundation as its newest charitable beneficiary. As a founding sponsor of Starlight Children’s Foundation’s VR program, Force for Change will continue to empower and improve the lives of children around the world. With a bright future ahead, and new Star Wars stories to be told, Force for Change aims to continue collaborating with causes and encouraging others to be forces for change in their own community. To learn more, please visit ForceForChange.com.

Lucasfilm Ltd., a wholly-owned subsidiary of The Walt Disney Company, is a global leader in film, television and digital entertainment production. In addition to its motion-picture and television production, the company’s activities include visual effects and audio post-production, cutting-edge digital animation, interactive entertainment software, and the management of the global merchandising activities for its entertainment properties including the legendary STAR WARS and INDIANA JONES franchises. Lucasfilm Ltd. is headquartered in northern California.

Starlight creates moments of comfort and joy and comfort for hospitalized kids and their families. For 35 years, Starlight’s programs have positively impacted more than 60 million critically, chronically and terminally ill or injured children in the US, Canada, Australia and the UK. With your help, kids and their families will enjoy Starlight VR, Starlight Brave Gowns, Starlight Fun Centers and other Starlight programs at a children’s hospital or facility near you. Support Starlight’s work by visiting www.starlight.org and by following Starlight on Facebook, Instagram and Twitter.

UNICEF promotes the rights and wellbeing of every child, in everything we do.  Together with our partners, we work in 190 countries and territories to translate that commitment into practical action, focusing special effort on reaching the most vulnerable and excluded children, to the benefit of all children, everywhere. For more information about UNICEF and its work for children, visit www.unicef.org.  Follow UNICEF on Twitter and Facebook.

Omaze is an online fundraising platform that offers once-in-a-lifetime experiences and exclusive merchandise to support nonprofits around the world. Omaze is disrupting the charitable giving space by offering creative opportunities that make it fun and easy for anyone to give. Each of our fundraising and awareness campaigns brings together influencers, nonprofits and people across the globe and enables real, lasting impact. Since launching, Omaze has impacted more than 200 charities and received donations from over 175 countries.