Geek News Network
Home Reviews Movie Reviews STAR WARS THE FORCE AWAKENS | The Movie We Have All Been... 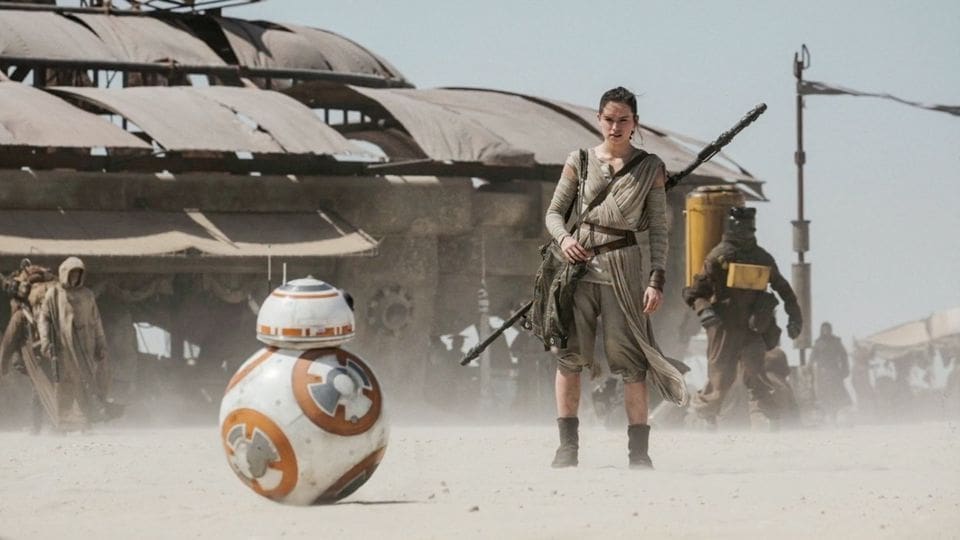 “These aren’t the droids you’re looking for.”

This famous line from Obi-Wan Kenobi in the first movie (no, not the prequel) will forever be etched in our memories along with other memorable lines and scenes that defined generations of fans. The movie that was so different from anything that came before it created a pop culture uproar that not only won for its art direction, costume design, film editing, score, sound and visual effects but was also nominated for best picture, director, original screenplay and supporting actor. Categories that are usually saved for dramas and art house films when the Academy is generally averse to genre films such as Star Wars. So why the history lesson? The latest installment from director J.J. Abrams, Star Wars The Force Awakens has recaptured that same magic the original film A New Hope and its following two films The Empire Strikes Back and Return of the Jedi created. And should earn him a best director nod if not a best picture nomination as well. In a movie year where there clearly are no favorites, The Force Awakens will leave an indelible mark to end the year.

Anticipation for this movie has been at a fever pitch with record-breaking advanced ticket sales, sold out toys, endless social media posts and fans waiting in line over a week in advance for midnight screenings. Can anyone remember when there was this much excitement for a movie? Yeah, it was Star Wars: The Phantom Menace and its subsequent sequels. Boy did those disappoint. So why all the furor over Star Wars again after a sub-par return with the prequels over a decade ago? It’s not because Star Wars was one of the original super fandoms (though that is one of the reasons). But because we all want to love this movie. Not only the hardcore and casual fans outside the industry but also the fans within the industry. After acquiring the rights to Star Wars, Disney gave the reins to J.J. Abrams (Super 8, Star Trek, Lost) because they knew he not only had the chops to direct such an enormous movie but he himself is a fan. That he can give it the care and attention to detail that it deserves. He even went to the original movie première as a child in the late 70s. Did you see his Star Trek reboots? They were basically Star Wars movies set in the Trek universe. And him bringing Lawrence Kasdan (co-writer of Empire Strikes Back and Return of the Jedi) and Michael Arndt (The Hunger Games: Catching Fire, Little Miss Sunshine) on board to help map out these next installments, with a combination of original trilogy experience and modern storytelling, their goal was to make a delightful film that can bridge together two generations of fans. And they achieved it.

From John Williams masterful score with beautiful touches from the original soundtracks to the chemistry of lead characters Finn (John Boyega) and Rey (Daisy Ridley), this movie delivered on all fronts. The comic relief between droid counterparts C-3PO, R2-D2 and newcomer BB-8 to the classic one-liners from Han Solo (Harrison Ford) and Chewbacca (Peter Mayhew) that we all fell in love with. The adrenaline-packed X-Wing/Tie Fighter action scenes with new ace pilot Poe Dameron (Oscar Isaac) to the renewed fear and awe of the dark side with villain Kylo Ren (Adam Driver). And touching moments between Han and Leia (Carrie Fisher) that will make even the most hardened dark side supporter tear up. Even the art and style of the movie is reminiscent of the original trilogy with fully built sets and practical effects with wonderful homages and easter eggs to the original movies if you pay close enough attention.

In an age of nonstop reboots of past popular movies and franchises, the thing about this film is that it is not a reboot. It is not entirely something new that Abrams and company had to recreate. But it is a beautiful combination of old and new. He had the immense Star Wars universe that George Lucas created before him to work from. And he brought together the past and present masterfully. There is everything here for fans of the original trilogy and the same magic to bring in a new generation of fans. As we see Han, Leia and Luke ring in the last generation; Rey, Finn, and Poe will usher in a new era. The baton is finally being passed to the right hands. But don’t take my word for it. Go see it.

About Star Wars The Force Awakens

Synopsis: Thirty years after defeating the Galactic Empire, Han Solo (Harrison Ford) and his allies face a new threat from the evil Kylo Ren (Adam Driver) and his army of Stormtroopers.

[…] review that takes away that gloss and critically break down the film. If you have read my review of The Force Awakens nearly two years ago, you will notice that I did not pull back the reins. I gave it high praise […]