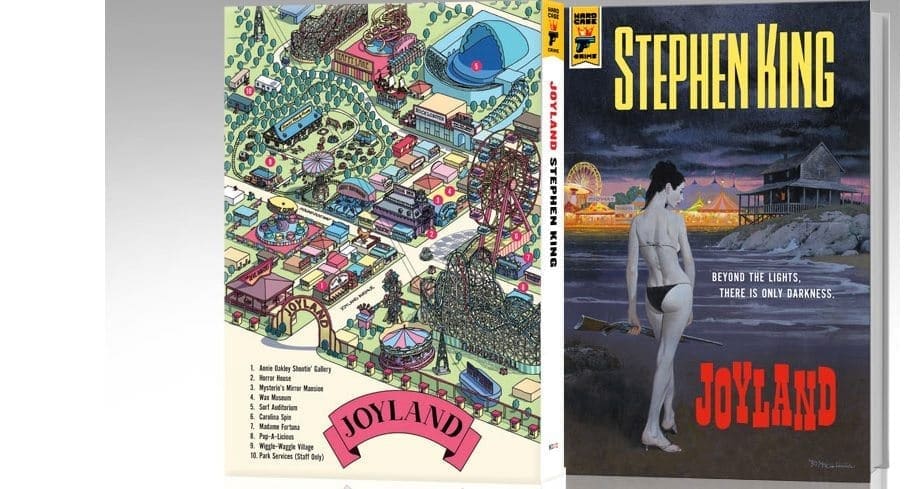 My fondest memories from childhood are those spent late at night with a flashlight in hand. Whether under the covers in my room ruining the following school-day by staying up until the outrageous hour of 2 a.m., or “camping” in the backyard in the dome tent I bought with the proceeds from my first job as a paperboy (and I’m really showing my age with that bit), I spent what to most of today’s generation very well might seem like an obscene amount of time reading.

I loved to read, and I still do. It’s a love affair that has no equal. Many technologies have come along looking to unseat the novel as the Champion of entertainment. First radio and film, then television, then video games. And while the old champ may seem to be on the ropes, it’s not out of the fight yet. Maybe that’s the which of why Stephen King’s Joyland gives all the appearance of coming out of the corner swinging by appearing exclusively in good old-fashioned hardcopy.
There’s something to be said for an honest-to-God physical book. What tablets and Kindles and Nooks and LED-backlit IPS and Retina displays and SSDs offer us in convenience and storage and multi-tasking, the physical book doesn’t — and doesn’t intend to. It seems almost defiant in its size and weight; its scent and softness; its sensual, no, intimate tactile presence.

And that fits; at the intersection between this author and this story, it is profoundly right that this book be a thing that you must hold and smell, a thing that is pages and binder rather than pixels and bits.

Set primarily in early 1970s South Carolina, Joyland is the story of young Devin Jones, a college boy who, through his summer employment, experiences transformative events in the embrace of the eponymous second-tier amusement park when he encounters the spirit of a murdered girl in the Funhouse of Fear. That’s King’s deep and affectionate nod to horror and to crime with this work.

I call it a “nod” because, although it really is the premise of the novel, it isn’t the theme of the novel. The theme of the novel is a pervasive, deeply human story of transformation and rebirth in the midst of the dying, out of the old way of living, and of being. That theme stretches from the death of Devin’s relationship with his college sweetheart, and his rebirth into a world of living without that relationship, to the murder of an innocent girl and her rebirth as the lonesome midnight tenant of Joyland’s Funhouse. And that theme continues even in King’s choice to forego electronic publishing of this particular novel, to give one last great valiant shout for the old way of doing things — perhaps there are tears in the eyes of the shouter, but perhaps not. Perhaps there is a tightening in the throat but a wild-eyed grin, instead, but here are the words: The champion isn’t down, after all — it’s just getting its second wind.