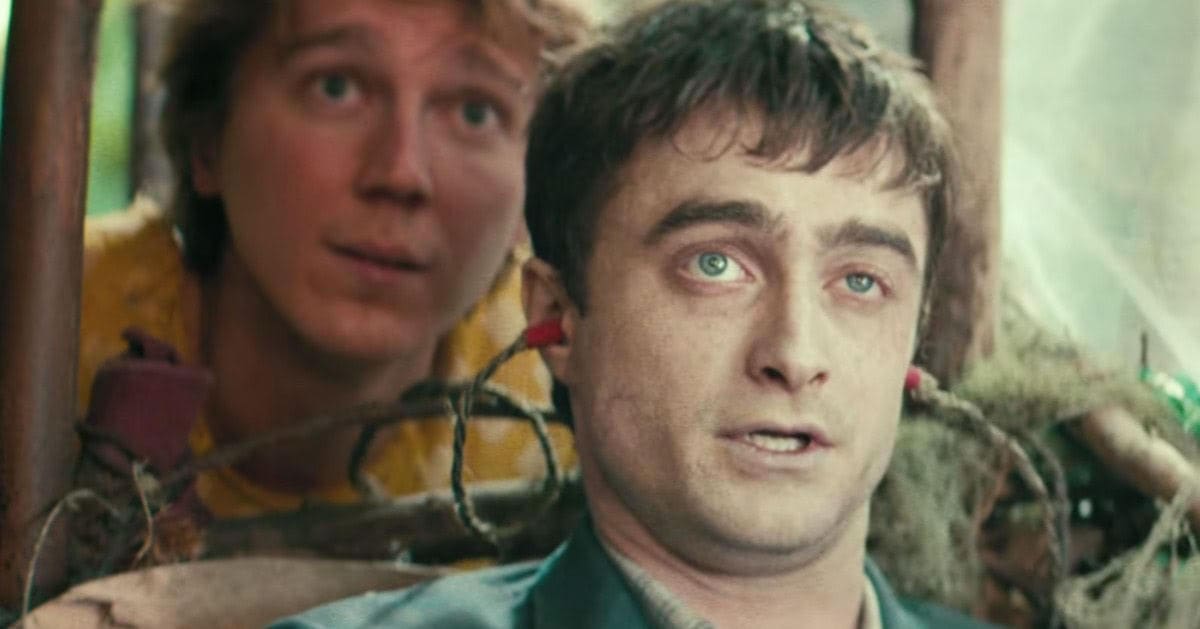 I remember as a kid seeing a film called Weekend at Bernie’s.  It was this odd story of two men who are invited to a big weekend party at their boss’ beachfront, vacation home and discover, just as the party is about to begin, that their boss is dead.  Fearing they might be implicated, they pretend he is alive just long enough to enjoy their weekend and get away at the same time.  The guests never seem to notice this seemingly lifeless body with sunglasses is deceased and we sort of accept it cause it’s funny to watch a corpse be used for morbid comedy.  It did somehow produce a sequel, which defies all manner of logic, but ever since I don’t believe a film, up to this point, has quite captured that absurd premise quite like the one I just witnessed.

In Swiss Army Man, directed by Dan Kwan and Daniel Scheinert, Paul Dano plays Hank, a man  trapped on an island and unable to find his way back to civilization.  His messages for help go unanswered and it seems all hope is lost until a slightly, fresh corpse (Daniel Radcliffe) washes ashore.  The corpse is motionless and unresponsive, except for the occasional release of gas from his posterior.  Hank sees this man as a friend he can confide in; and after some strange interactions, he manages to summon up the will to forge ahead with his journey to be rescued.  His biggest reason being a woman he is obsessed with and wants to return to, but does she even know he exists?

My description of the film must remain brief as to not spoil how fun and absurd this movie really is.  I mean if you aren’t enthralled by the idea of a man carrying a corpse with him everywhere he goes, then you will be happy to know this isn’t a one-sided conversation.  Danielle Radcliffe does speak and has some pretty interesting things to say, but you aren’t quite sure if it’s real or if it’s the projected madness of a starving, dehydrated survivor of a boat accident.  Also there is an almost Swiss Family Robinson atmosphere with all the interesting uses of human trash left around the forest.  Hank uses every piece of it to make his best interpretation of life in the city and all the things people do for fun.

When it comes to playing a corpse on screen, I almost thought it was the easiest acting job anybody could get; but to let your body go limp and ignore the impulse to save your face from hitting a rock or tree sounds pretty challenging.  Danielle Radcliffe does an excellent job of resisting those impulses and engaging the audience simply with his words.  I’m sure there was padding used and special visual effects to protect both him and Paul Dano, but the result altogether comes off very well and you completely accept the situation no matter how strange it appears.

I found the story to be very intriguing and the unique visual style with which the film presented that story really compliments the narrative.  I believe this film to be about a man with nothing left to lose and at the end of his rope; so he decides to break his life down to its simplest components.  As he examines his memories and perspective, he hopes to find the courage and confidence to make a better life.  Whether that life is back home or staying lost in the woods with an inanimate, talking corpse is pretty much up in the air.  Again while you accept the reality presented to you, you still wonder if any of this is really happening.

Swiss Army Man takes a premise that sounds interesting on paper, but for someone to make a feature film out of it is something else entirely.  Fortunately it succeeds in its execution and that is due to Paul Dano and Daniel Radcliffe.  They have terrific chemistry together and every scene keeps you engaged.  If not by their conversations, then probably by the remarkable sound and visual effects this small film uses to enhance its story.  While I did enjoy the way the film wraps up, it does feel rushed and may not work for some people.  It certainly isn’t at all predictable.  Also there is a modicum of logic with regard to time and distance that can’t be ignored, but this an example of appreciating the journey in lieu of a satisfying payoff.  I relish the world of the absurd and this certainly qualifies for a spot in the top ten.  I only wish I knew who to recommended this for except maybe dates trying to figure out if they are with the right person.  It’s certainly a litmus test for determining common interests.   If you harbor a morbid sense of humor and enjoy seeing Harry Potter fart his way to an Oscar nomination, who knows, then you will be entertained.

Synopsis: A hopeless man stranded in the wilderness befriends a dead body and together they go on a surreal journey to get home.