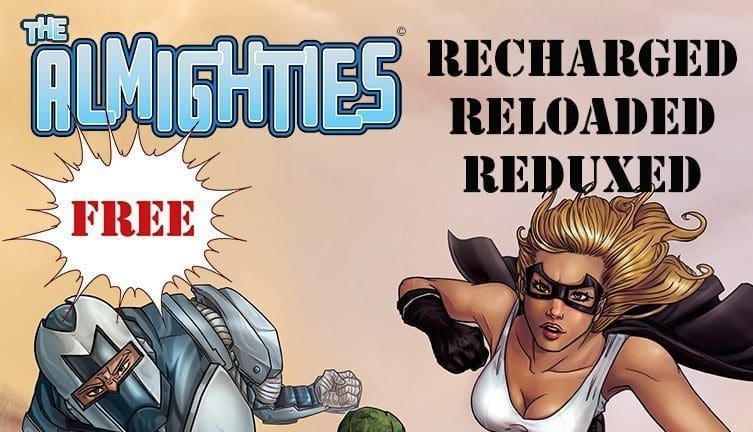 Following their critically acclaimed one-shot and Almighties Origins, The Almighties’ creators Sam Johnson (Geek-Girl,Cabra Cini: Voodoo Junkie Hitwoman) and Mike Gagnon (Classics Illustrated, Monkeys & Midgets) are bringing us a 12-page free digital comic that gives you Origins and everything you need to to jump into the world of their comedy super-team.

“Do you sometimes have difficulty sleeping at night? Do you ever feel unfulfilled or have that nagging feeling in the back of your mind that there’s something missing from your life? Something important…? Well, I can say without any hyperbole that The Almighties: Recharged Reloaded Reduxed is that thing,” proclaims Johnson; “The Almighties are the first comedy super-team to fill the hole left by Mungo Coconut and his Flaming Galahs!”

If that’s a name that leaves you scratching your head at the blank space in your brain it’s just illuminated, well…that statement, like everything in Johnson & Gagnon’s comic book, is made with tongue firmly in cheek.

Originally ‘amassed’ in their Avengers-parodying debut – before disbanding when they found out their benefactor was a Neo Nazi – The Almighties have caught the eye of Joe Cyborg: a disembodied head attached to a robot body, who holds an undisclosed position at The White House.

“Joe wants his own strike force for ‘off the books’ assignments, so he gets together with Stefanos, another government employee of ambiguous vocation…” Johnson continues. “Stefanos is a kabob shop owner who (inexplicably) has earned the trust of not only Joe Cyborg, but of President Obama himself.”

As Joe and Stefanos review the files of Stef’s former team-mates, we learn the origins of armored ‘Career Super-Hero’ Maxi-Tron; cocky British punk/werewolf Nite Fang; former downtrodden housewife turned swingin’-superheroine Ms. F; and borderline psychopath Mason. “And if this doesn’t sound like an obvious bunch of ‘super-heroes’,” says Johnson, “Well… Joe Cyborg knows this crew were originally manipulated into carrying out the machinations of a Neo Nazi, so are his ownmotives whiter than white…? (no pun intended.)”