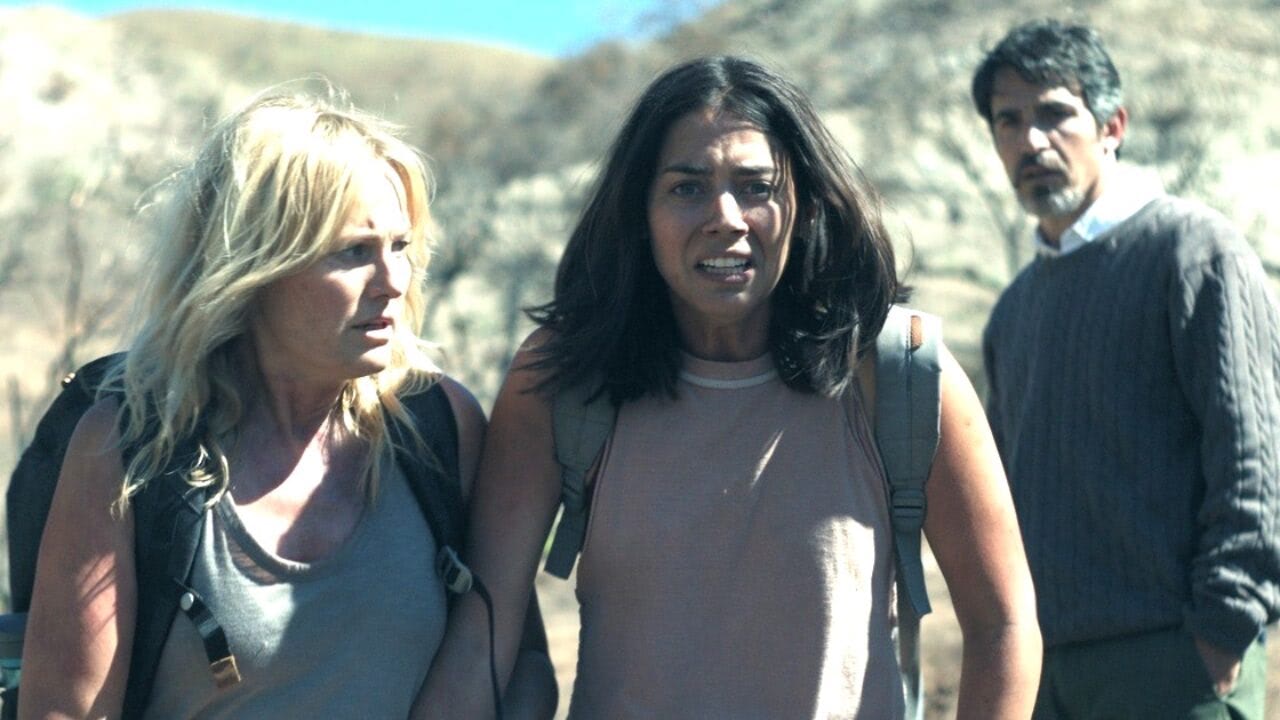 The illusory nature of cinema makes it a great vehicle for placing viewers in the minds of characters.  This is particularly suspenseful when those characters have a tenuous hold on reality. This narrative technique is on display in The Aviary; a film that takes us on a journey with two women trying to flee a manipulative cult.  This low-budget psychological horror film does tremendous work with very little to emulate the frightening control cults can exert over the human mind and people’s perception of reality.

The Aviary takes place in the New Mexican desert as escaped cult members Jillian (Malin Akerman) and Blair (Lorenza Izzo) attempt to reach the nearest town with very little food and water.  They begin their journey as two strong women supporting each other as they brave the desert and work through their shared trauma.  However, while they may have physically escaped the Skylight cult compound and its leader Seth (Chris Messina), it becomes increasingly evident how much of his psychological conditioning still follows them.  Jillian and Blair find themselves experiencing hallucinations, dreams, and bizarre behavior which increasingly challenge their perception of reality and trust for one another as secrets unfold.

The Aviary does a number of things exceptionally well.  Akerman and Izzo each deliver the solid performances necessary to accommodate a film intimately focused on their characters.  Less is more when it comes to the brilliant simplicity of the desert backdrop.   Not only does it emulate the basic fear of being lost, but it ironically grows to feel claustrophobic as we become increasingly lost in our characters’ minds.  The wide-open setting begins to feel like a wall-less prison the more it becomes evident things must not be how they seem.  That palpable tension of not knowing who or what to trust reverberates intensely as it enthralls us in the gripping mystery.

Another well-depicted theme is that of manipulation and control.  Seth, being the quintessential cult leader, has built relationships with these women designed to exploit their vulnerability and foster dependence. He also uses some insidious brainwashing techniques to boot.  While cult dynamics certainly take this kind of psychological manipulation to the extreme, the characters’ struggle (particularly early in the film) reflects the mental toll of being in a toxic relationship, thus enabling general audiences to empathize.  All these various themes of feeling trapped and powerless complement each other and feed the increasingly ominous mystery.

Unfortunately, all this well-crafted build-up doesn’t materialize into anything that feels worthy of it. There are probably two satisfying directions the film could take. Either it builds to a mind-blowing twist or an intimate reflection on mental manipulation. Sometimes these can conflict with one another. A big twist runs the risk of feeling predicable or silly and undermining the emotional weight of what preceded it.  An intimate reflection still has to pay its due to the mystery.  Without divulging which direction it leans more heavily, I will say The Aviary loses its magic in the final act and starts to feel mundane and conventional.  The conclusion is not a total derailment, and it doesn’t completely undermine the rest of the film’s merit.  However, it does diminish the intrigue and keeps The Aviary from being truly memorable.

Synopsis: Two women fleeing a cult compound struggle to survive in the desert and keep their grip on reality as they remain haunted by the lingering effects of their psychological conditioning.