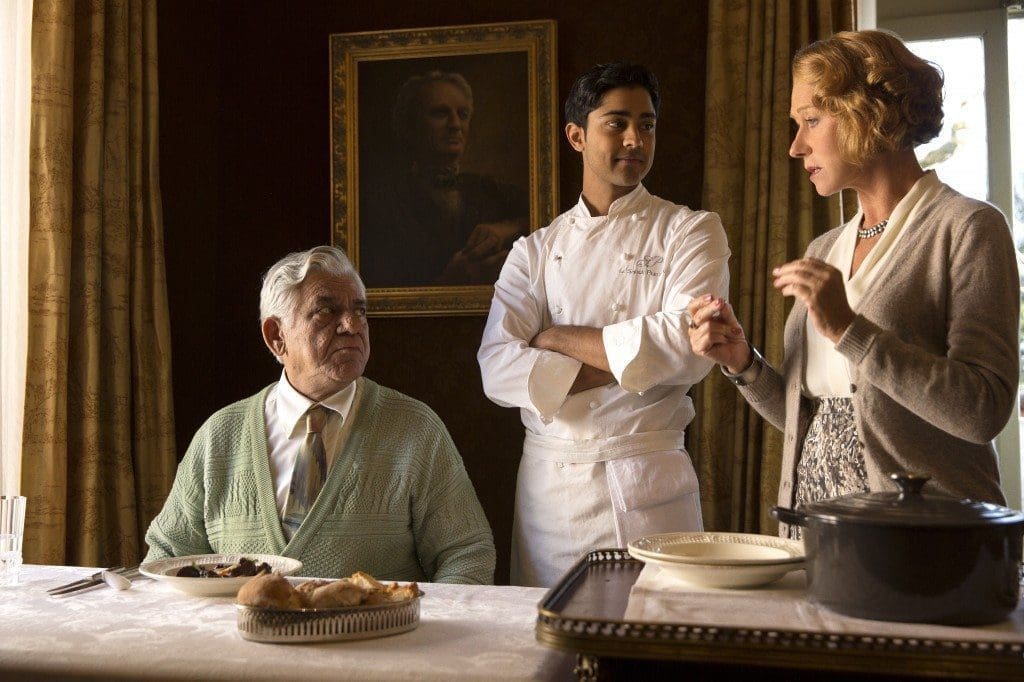 When you center a film around food and engage the audience with the passion of cuisine, it’s hard not to be enthralled with the story no matter where it takes you.  If you love seeing food being prepared of course.  Place that story in the French countryside and you have what could only be a brilliant formula for success.

In the The Hundred-Foot Journey, directed by Lasse Hallstrom(Chocolat, Salmon Fishing in the Yemen), Hassan Haji(Manish Dayal) develops a love of food from his mother at a young age and learns to feel the soul of the ingredients he uses.  His family is uprooted from their home in India and move to England for a time.  Until his father decides they should caravan through Europe and find the perfect place to start a restaurant.  Through a happy accident, they happen across a small village in France with prime real estate.  Hassan’s father, Kadam(Om Puri), decides to set up their authentic Indian restaurant, the Maison Mumbai, in this quiet village, drawing the ire of the only other restaurant at that location, the Le Saule Pleureur.  A classic French dining establishment run by Madame Mallory(Helen Mirren), who isn’t pleased with the competition.  The inevitable rivalry ensues.

The story is pretty predictable with the Haji family trying to attract customers with very flamboyant style while the bitter Madame Mallory attempts to derail their business.  Her cold demeanor does eventually thaw and we see some fun conversations between our main characters.  Hassan is the one we follow on this journey of culinary discovery, but he does get some help from a rival chef in Marguerite(Charlotte Le Bon).  Their relationship grows quite well throughout the movie and you can’t help but see where it eventually will lead.  The characters I had the most fun watching were Papa Kadam and Madame Mallory.  Om Puri and Helen Mirren play these parts well with playful contempt for each other.  They are the immature couple in this showdown and Hassan, along with his family, have to mediate their stubborn antics. With the exception of a few legitimate skirmishes, the film never really suffers any serious conflict.  It’s very lighthearted and chooses to be so, but that’s not a bad thing.  If anything I would say it needed more suspense because you could tell how things were going to turn out without having read the original book by Richard C. Morais.

The screenplay surprisingly was written by Steven Knight who wrote the screenplay for the recent movie Locke.  It’s not as engaging as that amazing movie, but some of the characters do have good chemistry. The movie does remind me of another certain culinary film set in France that I admire.  Hassan has certain responses to his food that resemble the adorable Remy from Ratatouille.  There is also a food critic who could decide the reputable fate of Madame Mallory’s restaurant and the talents of two driven young chefs who are trying to make a name for themselves while maneuvering their mutual affection.  Whether this movie matches the brilliance of that Oscar nominated film is questionable, but you will find it enjoyable all the same. I would recommend this movie for Helen Mirren’s performance alone, but also for Om Puri as well.  The dedication of Hassan is enough to make you want to see this story through to the end, but occasionally I found myself wishing the story between Kadam and Madame Mallory was the main focus with how well their scenes turned out.

Movies about food are always a treat and make you dream of conjuring up the dishes right in front of you so you can savor it with all five senses.  If you’re talented enough, you can make these dishes on your own; or find the restaurant that can.  Either way you will be hungry so have a game plan when the credits roll.  Movies like this should come with food samples don’t you think?

About The Hundred Foot Journey

Synopsis: A story centered on an Indian family who moves to France and opens an eatery across the street from a Michelin-starred French restaurant run by Madame Mallory.

“Birdman or (The Unexpected Virtue of Ignorance)” Movie Review