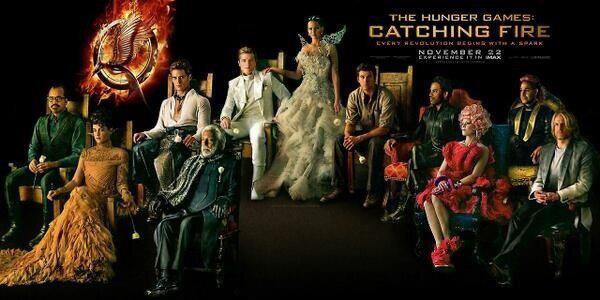 One of the year’s most anticipated movie releases, The Hunger Games: Catching Fire, takes you back to the world of Panem and the 12 Districts. After winning the 74th Hunger Games with fellow tribute Peeta Mellark, Katniss Everdeen must now embark on a “Victor’s Tour” of all the Districts culminating in a final stop at the Capitol. Along the way, they both see a rebellion brewing amongst the Districts where the Capitol takes extreme measures to quash. Meanwhile, President Snow prepares the 75th Annual Hunger Games, “The Quarter Quell” – a competition that will change Panem and its future.

If you are reading this review and only want to know if it is worth it to see this sequel, then yes, this movie is more than worth it. It is light years beyond its predecessor with new director Francis Lawrence taking over for Gary Ross, and that is saying a lot. The first Hunger Games was a fine movie in its own right. But Catching Fire not only has improved CGI but a story that takes you through all the realms of emotions. There is not a moment where the plot drags along. The story is always engaging whether it is an emotional scene, action sequence or back story. There are minor deviations from the novel but for the most part, the movie follows it very well.

The strength of the movie though is in its strong cast of actors. Jennifer Lawrence (Katniss) brings an all-star performance again as you would expect from this Oscar-winning darling. Josh Hutcherson (Peeta) role is improved in this movie from damsel in distress to a warrior who is ready to fight and sacrifice for his loved ones. Donald Sutherland (Snow) returns with an expanded role and plays the ruthless President Snow perfectly. There is nothing that you can love about him and veteran actor Sutherland does this without a batting an eye. Joining the cast is Philip Seymour Hoffman playing the role of the new Head Gamemaker, Plutarch Heavensbee who replaces Seneca Crane from the first Hunger Games. A position that has very low job security, Plutarch is charged with changing the public opinion of Katniss, using the 75th Annual Hunger Games to accomplish this. Returning actors Woody Harrelson (Haymitch Abernathy) and Elizabeth Banks (Effie Trinket) bring more gravitas to their respective roles as they both grow closer to their victorious tributes. Stanley Tucci (Caesar Flickerman) and Toby Jones (Claudius Templesmith) return in their boisterous yet humorous roles as the hosts of the Hunger Games. Liam Hemsworth (Gale Hawthorne), Lenny Kravitz (Cinna), and Willow Shields (Primrose Everdeen) and Paula Malcomson (Katniss’ Mother) round out the original cast. New cast members Sam Claflin (Finnick Odair), Jeffrey Wright (Beetee), Amanda Plummer (Wiress), Jena Malone (Johanna Mason) fill in their roles perfectly in respects to the novels.

Taking a page out of Peter Jackson’s Lord of the Rings trilogy, Catching Fire and the Mockingjay two-parter were all filmed at the same time. This provides a tight production schedule but this will allow the movies to all have the same feel without much deviation. The Lord of the Rings was a tremendous success because all three movies felt like one mega movie. So look forward to the final two chapters of the Hunger Games, Mockingjay to be an amazing follow-up to Catching Fire!

About The Hunger Games: Catching Fire

Synopsis: Katniss Everdeen and Peeta Mellark become targets of the Capitol after their victory in the 74th Hunger Games sparks a rebellion in the Districts of Panem.