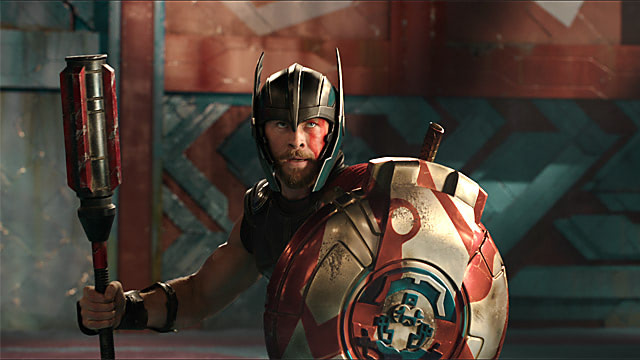 Marvel Studios has had no problem attracting an audience over the years.  Their formula for success has been replicated from one franchise to the next and, with such outstanding box office results, it’s difficult to see them making a misstep.  The usual criticisms fans give most Marvel films is their lack of a compelling or captivating villain (with the exception of Loki), and the lack of any real stakes, which is made difficult with the lighthearted tone and once deceased individuals turning out to be alive after all.  I’d argue Zemo was pretty interesting and the Captain America sequels have been very intense.

The only real casualties of these movies are innocent civilians, but that might change with the upcoming Avengers film.  The other factor that keeps these Marvel films relatively fresh is their cross-pollination of the comic book movie and other genres.  You might get a standard superhero movie, but you could also get a political thriller, a heist film, a music-driven space adventure, a journey through magic, or an international war film.  Whatever your feeling that day, Marvel makes sure they’ve got something for you.  On the menu this year is an intergalactic, action-packed family comedy so let’s jump into our Thor: Ragnarok review.

Directed by Taika Waititi, Thor: Ragnarok consists of Thor (Chris Hemsworth) contending with a powerful new villain named Hela (Cate Blanchett), a woman who is dead set on ruling Asgard.  After he loses his hammer, Thor finds himself trapped on an alien world that battles its prisoners against one another.  Thor’s brother Loki (Tom Hiddleston) continues to annoy him and wreak havoc whenever possible.  During this adventure Thor meets Valkyrie (Tessa Thompson), a former warrior with a devastating past who now services the Grandmaster (Jeff Goldblum) on this battle planet, Korg (Taika Waititi), a rock creature who has seen his fair share of competition in the arena, and Hulk (Mark Ruffalo), who enjoys taking down any competitor brought before him.  With the looming threat of Asgard’s destruction imminent, Thor must find a way to rally a new team of fighters to help him rescue his people and save his friends.

If there’s anyone word best used to describe this movie, it would be “fun.”  It also happens to be exciting and full of humor.  Each scene in this movie does its job and moves you along the story with ease.  You’re never left checking your watch or squirming because you’re waiting for something to happen.  The movie brings the characters to life in a way that makes you care about them, but it also makes you invested in the huge action scenes.  Some movies try to entertain you with only a barrage of visual imagery and noise; but if there’s no emotional tether between the character on screen and the audience, then it won’t hold your attention very long. Thor: Ragnarok grabs you from the opening scene and lets you know exactly what you’re in for.

The most challenging part of any comic book film is to balance the fantastical with the real.  There are so much fantastic imagery and unbelievable technology that you need some authentic, human moments to ground it.  One of those moments comes in the form of The Grandmaster.  Jeff Goldblum is hilarious in this role, and I suspect he was told to put all of his personality into it.  The result is this strange, sadistic ruler with an inflated ego that enjoys pitting his prisoners against each other for sport.  You get a fair amount of Goldblum in this movie so don’t feel like he’s a bit part in this overall spectacle of a sequel. In fact, every character gets their moment to shine.  The writers and Taika Waititi made sure no character was left behind on the cutting room floor, except maybe Thor’s Asgardian pals. I do wish their brief presence was better spent, but otherwise, the cast shines in equal amounts.

Cate Blanchett is a phenomenal actress and her portrayal of Hela is both terrifying and informative.  She commands the screen with her delivery of each line and commands, even more, attention with that gargantuan headpiece. Hela also provides an expanded history of Asgard and how it came to rule the nine realms.  Exposition can be hard to provide organically in a script, but I thought they found ways for it to work without feeling forced. Blanchett is a worthwhile addition to the Thor franchise, and Hela is a brilliant villain with depth and a giant chip on her shoulder.

When it comes to the enjoyment of any movie, the chemistry between the cast cannot be understated.  It can kill a movie if the characters interacting on screen don’t work well together emotionally; or sound like they’re acting in different films. Chris Hemsworth has great comedic timing and his chemistry with Mark Ruffalo, Tessa Thompson, and every other actor in Thor: Ragnarok is excellent.  You can tell that they are having as much fun behind the camera as they are in front of it.  The energy level of their performances resonates and creates an atmosphere of joy.  You can’t help but smile for most of this movie.

Thor: Ragnarok isn’t just about humor and action scenes.  It has tense, sincere moments when necessary, but for the most part, you are meant to chuckle at Hulk’s dialogue, or Thor’s inability to talk to women properly, or Hela’s attempt to appear relatable to her servant Skurge (Karl Urban).  If you said the humor at times overpowers the emotional and sincere moments, I wouldn’t argue with you. The editing does not always give you time to reflect on someone’s death.  Thor is one character that does get a balance of humor, emotion, and action in his personal story.  The rest of the characters and scenes are meant to serve that story, so the humor can periodically mask the dimension that character is developing.

You do sometimes get glimpses of heartfelt interludes.  I felt compassion for Valkyrie as I got to know her.  I also experienced real emotional beats from Hela and Skurge, and that is quite the achievement considering all the plot points swirling throughout this galactic extravaganza. Still, while I loved the humor, I can see where it would take away from the emotional impact of a scene. It’s a balance that Guardians of the Galaxy has also dealt with.

Speaking of Guardians of the Galaxy, audiences may find it easy to make comparisons between Thor: Ragnarok and the crew of the Alyssa Milano.  The two inhabit similar galactic airspace, but I would say Thor: Ragnarok is more defined by its mythology than a catchy soundtrack.  Both are brilliant in their execution, and when I list my favorites of the MCU these two would be in the top five.  The other clear difference is the diverging styles of directors James Gunn and Taika Waititi. Gunn loves fun, quirky characters, but he puts strong, emotional cores underneath those moments.  Taika Waititi lets his quirky characters speak for themselves. Should you feel connected to them on an emotional level is entirely up to you, but the adventure does not slow down. If you enjoy the characters, you will feel their pain and their joy no matter how they end up.

Thor: Ragnarok is an outstanding movie and the best of the Thor trilogy.  The world building that Waititi was able to produce with this film is a feast for the eyes.  I also loved the choice of music and score. Chris Hemsworth owns his scenes and makes you believe he is, in fact, Thor.  Tessa Thompson is another standout actor that I hope gets more attention in the future.  Mark Ruffalo is great as a human or the green rage monster, and Jeff Goldblum is all kinds of amazing. His interactions with his assistant are a treat to watch.  Tom Hiddleston continues to deliver as Loki and Cate Blanchett is a vision and inspiration. I can’t compliment her enough.  Karl Urban does not have a huge part in the film, but he surprised me with what he brought to his character.  I’m also happy that Anthony Hopkins came out of retirement to play Odin once again. He brought so much personality in this film that I wish he would come back for more.

I highly recommended this movie to families, comic book aficionados, Marvel fans, DC fans even, and fans of Taika Waititi.  The director gives these characters a refreshing dimension that’s both heartwarming and fun.  I hope he gets to direct another Thor film in the future.  Thor’s hammer may be gone, but the God of Thunder is in good hands.

Synopsis: Imprisoned, the mighty Thor finds himself in a lethal gladiatorial contest against the Hulk, his former ally. Thor must fight for survival and race against time to prevent the all-powerful Hela from destroying his home and the Asgardian civilization.