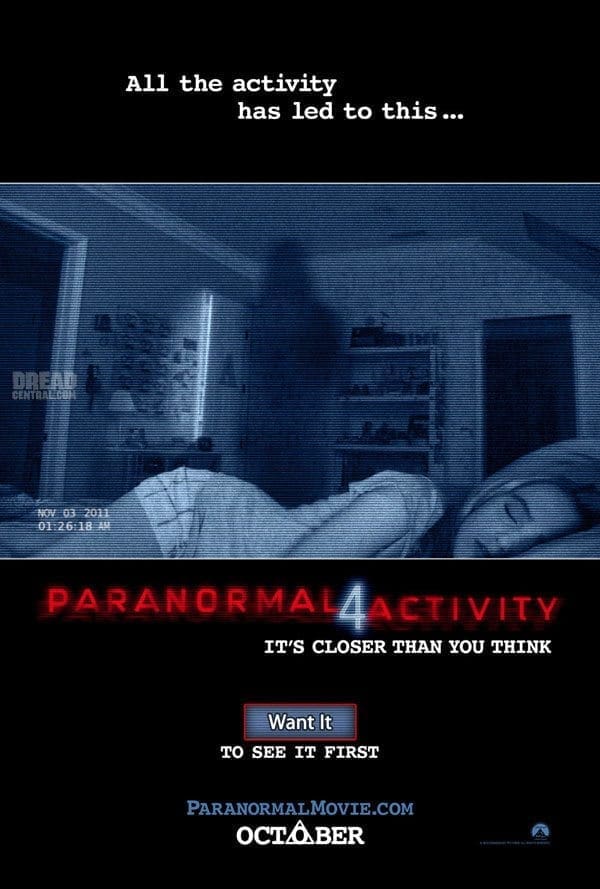 Details: Paramount has finally released the trailer for Paranormal Activity 4. With the tagline “All the activity has led to this…”, it would seem the series is back on track picking up where part 2 left off with part 3 being a prequel. Check out the trailer below plus more announcements from Paramount Pictures!

Paramount Pictures has also made an announcement for Facebook fans to determine which 25 cities across the globe will get an advanced screening of the movie. Check out the details below!

Fans of “PARANORMAL ACTIVITY” are being empowered to bring the movie to their city first.  Paramount Pictures, a division of Viacom, Inc., will debut the fourth installment in the popular horror franchise exclusively in 25 cities around the world by encouraging fans to vote to see it first with a new “Want It” application on Facebook.

Facebook’s 955 million global fans can vote for an advance screening in their city by clicking on the “Want It” button on the film’s fan page at www.Facebook.com/ParanormalActivity.
“Want It” is a dynamic application utilizing Facebook’s open graph technology that gives fans the opportunity to vote to bring the franchise to their city and leverage their social networks to ensure they are one of the top 25 winning locations.  The application recognizes a fan’s geo-location according to their Facebook profile and automatically registers a vote to bring the film to their city first.  Votes will be shared on a fan’s page and automatically posted to the Facebook newsfeed to rally their peers to bring the film to their city first too.
The application feeds individual votes into a dynamic leader board that shows the ranking of every city in real time.  Audiences can track the top cities as well as the ranking of their own city as well as push out reminders encouraging friends to vote.  “Want It” brings an unprecedented level of interactivity for fans in determining screenings of the movie.
“There’s a very special connection between ‘PARANORMAL ACTIVITY’ and Facebook,” said Matt Jacobson, head of market development at Facebook. “Four years after the initial success of the franchise and the establishment of a passionate fan community, we’re excited to see continued iteration on a franchise that was born on Facebook. Paramount is using both the Facebook platform and media to drive awareness of the film, three months out, and we will continue to drive awareness and intent at scale as we approach opening weekend in October.”
“The success of ‘PARANORMAL ACTIVITY’ began with the fans who have championed the movie franchise from the very beginning through social media,” said Amy Powell, Executive Vice President of Interactive Marketing. “Now we’re creating an even more dynamic experience among the film’s community of fans and for the first time, we’re giving them an opportunity to go head-to-head on Facebook with fans around the world to determine the 25 cities who get to see ‘PARANORMAL ACTIVITY 4’ before it opens.”
Fans can also vote at the film’s website, www.ParanormalMovie.com.
The 25 cities that receive the most votes will win a free screening of the eagerly awaited film before it hits theaters October 19, 2012.
“PARANORMAL ACTIVITY 4” is directed by Henry Joost and Ariel Schulman.
Like “PARANORMAL ACTIVITY 4” on Facebook at www.Facebook.com/ParanormalActivity and follow on Twitter at www.Twitter.com/TweetYourScream.
0 0 vote
Article Rating