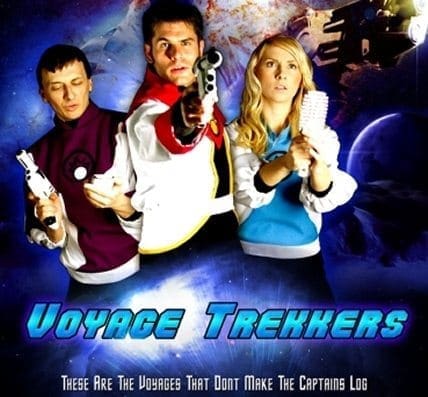 I arrived early so I would have plenty of time to look around as I had never been to the FilmBar before. It’s an intimate and comfortable venue half bar/half movie theater that has built a reputation of showing and supporting independent films and productions. Tonight promised an evening of the most popular episodes of Season 1 of Voyage Trekkers then a preview of Season 2, followed by a Q&A session with cast and crew.

On a table in the lounge was a model of the “Starship Bridge” that we could expect to see in Season 2 of the show (sans Rafael of course). There had been a recent successful Indiegogo campaign to raise funds for the building of the set.
As more people began to arrive I realized I knew quite a few of them from previous productions and events that I had worked on. There was David Stipes and Diane Cook – VFX Producer and Prop/Miniature modeller for Voyage Trekkers (and also my ride for the evening), Steve Fohey of Never Known Productions and Alice Baker, Director of the Film Festival for Phoenix Comic Con. In fact Alice was there to host the Q&A session.

At 8pm an almost capacity crowd was allowed admittance to the movie theater. Before the show began stand up comedian James Hoensheidt entertained the audience with his routine. James is a veteran of the cast having played King Opusari in the Season 1 finale and would be returning as a different and pivotal character for Season 2.

For the evenings’ show we were treated to Ep 3 “Birthday Surprise“, Ep 4 “Language Barriers“, Ep 7 “The Clutches of

General Kang” and Ep 9 “Fabulous Technology” (my personal favorite of the series). The audience may have seen it as many times as I have but we all still found our selves laughing at the pranks and misadventures of the crew of the GSV Remarkable.
After a short preview for Season 2, which revealed the return of the popular villain General Kang and a new look to the uniform for the officers of The Galactic Union, Nathan Blackwell returned to the stage with Alice Baker and they introduced the cast and crew for the Q&A. Writer and General Kang himself Craig Curtis, Actor Logan Blackwell – Cmdr Powell, Director of Photography Colleen Marshall, and Production Designer Nathan Stipes.

The questions from the audience ranged from technical (“How much of the show do you storyboard vs  how much spontaneously happens on set?”) to light hearted (“Logan do you really dance like Cmdr Powell did in Ep 7?” – the answer apparently being “Possibly being I don’t dance very much.”)  And there were several exciting announcements about the production too.  There is going to be an expanded universe in the coming months in the form of a novella from Chris Curtis which will be available as an e-book.  There will be several new crew members for the GSV Remarkable and we will finally get to see what the ship looks like.  Also other officers from the Galactic Union will be introduced, which should shed some new light on just how bad our wonderful “worst crew in the Galactic Union” are.

As the evening drew to a close Nathan Blackwell said the “most gratifying part of the whole event was being able to sit with an audience and watch their reactions to the show.” he also said he would “Absolutely have another event at the FilmBar.”

So although he won’t announce a firm date for the release of S2, leave a date open for another Evening with Voyage Trekkers some time in the future!

For more information on the show visit their website at:
www.voyagetrekkers.com

“The Perks of Being a Wallflower” Review