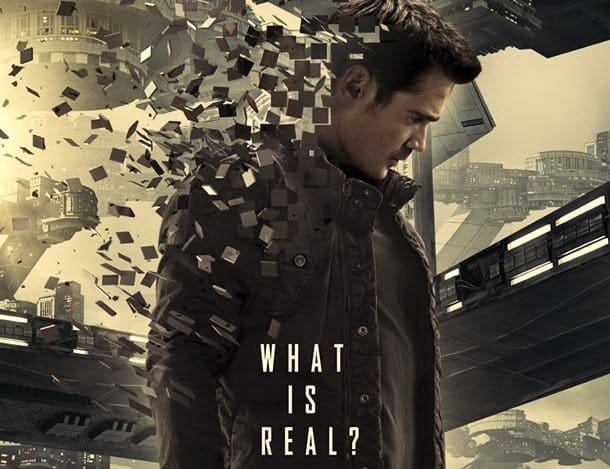 The tagline for the new Total Recall says it all, doesn’t it. Are they really making a sequel to the ‘classic’ Total Recall from 1990 directed by Paul Verhoeven? Is this new film the same or similar to the one I recall? These were the questions that ran through my mind an hour prior to showtime, as I waited in line for the midnight release. Granted said line consisted of my wife, myself, and the one guy in front of us; it still counts as a line. (Note: By showtime the theater did fill up to roughly 75-80% of capacity, so not too shabby.)

For me to truly review the film I feel that I need to look at it alongside its predecessor. (Warning: Minor comparative spoilers may be found for the new Total Recall. Larger spoilers for the original may also be found.)

First-off, let’s get this out-of-the-way: Total Recall does not take place in any way, shape, or form on Mars. Therefore you will not be hearing Arnold Schwarzenegger’s classic “Get your ass to Mars!” repeated by Colin Farrell. Personally I felt they had plenty of opportunity to work it into the film, but maybe they thought it would be a bit much. This time we’re given a lot more back story on where humanity is at this future point in time. All out chemical warfare has decimated most of the Earth, leaving only Europe (The United Federation of Britain) and Australia (The Colony) habitable.

The UFB is a huge sprawling futuristic city based heavily on what already exists in London. The Colony however is Australia with strong Asian influences, overlaid by a more haphazard design scheme. The UFB is taking the place of the original film’s villains, however they are still led by a man named Cohaagen; in this case played by Breaking Bad & Malcolm in the Middle‘s Bryan Cranston. The Colony, and the subsequent resistance movement, are representing Mars and its mutant-lead resistance movement. Kuato is sadly not the leader of this resistance as mutants don’t exist in this universe. Instead the resistance is led by a man named Mathias; played by the wonderful Bill Nighy. Freedom is still the main reason for ongoing fighting in Total Recall, but it’s not freedom from a ruthless tyrant hoarding oxygen. Instead it’s freedom from a large transportation device known as The Fall.

The Fall is essentially an elevator that in under 15 minutes time will allow people to commute between The Colony and The UFB. Some view this as just a means of transportation, but the people of The Colony view it as a means of oppression. I think that is probably enough summarizing of the plot for one review. Let’s go back to looking at each film for their own merits.

The story in Total Recall is good, possibly even better than the original. This time we’re given far more backstory on the world we’re viewing, as well as the characters living within it. At all points it is made clear what the character’s goals are and why they have those specific goals. The real issue is that none of it feels believable. The original Total Recall was a ridiculous, over-the-top action film in the vein of many films of the 80’s and 90’s. The story was completely ludicrous in many ways, but it was presented in a way that was enjoyable due to the fact that it was unbelievable. Now we’re given a story that is the same level of insanity, but the people involved in it are playing the roles to such a serious degree that it actually raises my disbelief. At many points in the film they seem to have trouble deciding if they want to be on the side of realism or of imagination. Obviously it borrows heavily from its source and is supposed to be one huge mind-fuck, but that aspect doesn’t come across in viewing it. This leads me to the core aspect of any action film.

Action films have fight scenes and, well, action scenes. It’s why most people go to these films in the first place. The original Total Recall is an action film of its era, where big brutish guys plowed through opponents with violent authority while sometimes wielding huge assault rifles. Going into this remake I was hoping for something depicted by the trailers; fast, lithe actors running, sliding, jumping, and quick-firing guns in every direction. Essentially the opposite of the original. Instead I was treated to some of the dullest action I have ever seen in a film. Don’t get me wrong the film has some enjoyable action sequences, but they are entirely within the first third of the film and are both seen almost in their entirety in the trailer. Namely, when Douglas Quaid (Farrel) takes out ten guards at Rekall and his subsequent fight scene with his wife Lori (Kate Beckinsale). Both of these scenes are well done, but we’ve already seen them and they’re knocked out in the first 30-45 minutes.

For the next hour we are treated to, and I can’t state this enough, some of the dullest, unoriginal action scenes seen this summer. Now maybe I’m being too critical of the film, but after the superb action of Dark Knight Rises and The Avengers, as well as one of my favorite action films of the year The Raid: Redemption, I can’t help but feel let down. The later action of Total Recall is incredibly slow-moving and forced into situations where it pauses heavily for ‘witty’ one-liners. See, this is where the original completely exceeds the remake; in the original they didn’t pause for one-liners, they placed them right into the action so that things flowed almost seamlessly together. I can bitch about the action scenes in this film all night, but there is another thing required of most action films.

That’s right, you can’t have an action film without babes in it. Total Recall gives us a villain played by Kate Beckinsale and a heroine (I use that term loosely) played by Jessica Biel. Now both of these women are actresses who I have enjoyed in other films, and obviously they are absolutely stunning. They however cannot live up to the total babe of the original film, Mr. Michael Ironside.

I am in no way kidding. When it comes down to it I think that Michael Ironside played a more believable babe-like character in the original Total Recall than Kate Beckinsale and Jessica Biel combined. Why, you might be asking? Well because honestly it seemed like neither actress really wanted to be in the film. Both actresses deliver fairly wooden performances, which might have gone unnoticed if not for the performances of Colin Farrell, Bryan Cranston, and surprisingly Bokeem Woodbine who played Quaid’s best friend Harry. Beckinsale was also playing double-duty as her character was a combination of the wife, played originally by Sharon Stone, and Ironside’s character Richter. In the end we’re given a half-assed villain that doesn’t live up to her predecessor in any way.

I obviously have some harsh feelings towards the film, but it really is not all bad. In fact, despite some major annoyances, the film is not bad. This is mainly due to the beautiful visuals shown at multiple times throughout its nearly two hour run time. The director Len Wiseman does a spectacular job framing up establishing shots of major areas throughout both The United Federation of Britain and The Colony. We get to see a side of this world that they were never able to show off in the original. The atmosphere created by this breathes a life into the setting that was never possible in the early 90’s.

*I would be willing to up the score to a 3 out of 5 had they decided to remove the last five minutes or so of the film. The entire ending felt completely tacked on and in no way essential to anything. In fact, I’m pretty sure that it completely destroyed the mind fuck atmosphere that was the goal of both the original and the modern Total Recall.

Check out the trailer:

“Dawn of the Planet of the Apes” Movie Review