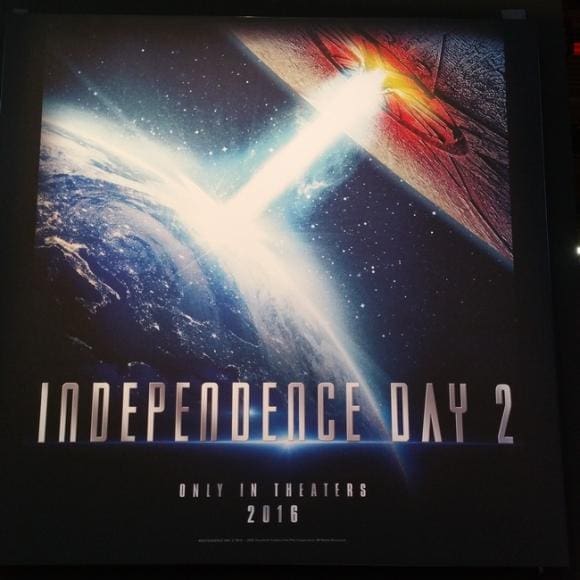 Wandering the halls of the Licensing Expo happening in Las Vegas Collider has brought us a first glimpse at an Independence Day 2 Poster! Looks like those aliens are back and in bigger ships than ever!

From the official synopsis:

After Independence Day redefined the event movie genre, the next epic chapter delivers global catastrophe on an unimaginable scale. Using recovered alien technology, the nations of Earth have collaborated on an immense defense program to protect the planet. But nothing can prepare us for the aliens’ advanced and unprecedented force. Only the ingenuity of a few brave men and women can bring our world back from the brink of extinction.

Back also are many of the characters you knew and loved from the first ID4, including, David Levinson(Goldblum) President Whitmore(Pullman), Julius Levinson(Hirsch) and Jasmine Dubrow(Fox). Brent Spiner is listed in the cast although Dr. Okun died in the first film. Joining them will be Maika Monroe as a grown up Patricia Whitmore, Liam Hemsworth – rumored to be President Whitmore’s Son in Law, and Jessie Usher as Dylan Hiller (Jasmine’s son from the first movie).

Notably absent is Will Smith who has apparently declined to be in the sequel.

Such a shame they opted not to have Mae reprise her role.