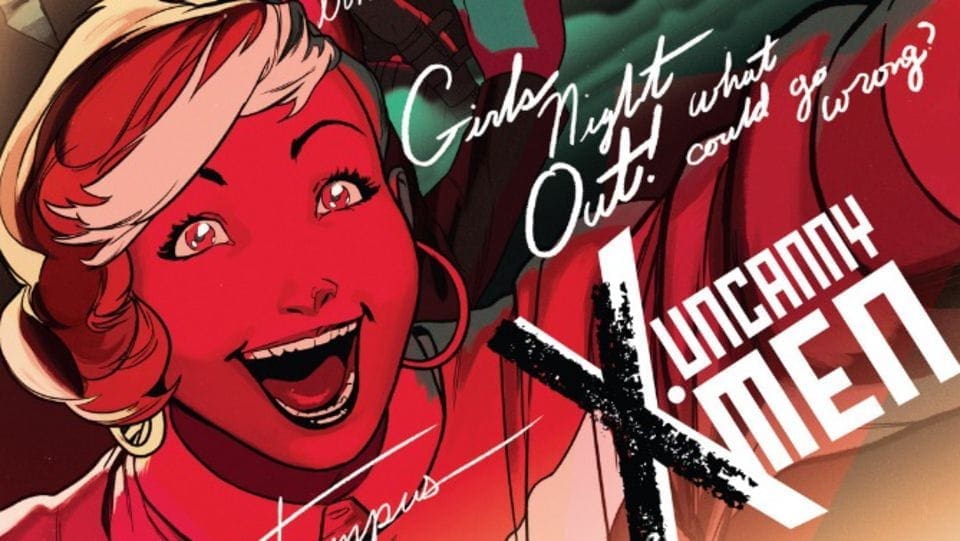 All Uncanny X-Men #15.INH is missing is a soundtrack to go along with it, and I imagine the featured track would be, “Girls Just Want To Have Fun.” This issue of Uncanny X-Men features the ladies of the New Xavier School hitting the streets of London for a night on the town filled with shopping, shopping, and more shopping. It’s not exactly the most riveting premise, especially for a book featuring X-Men, but it’s better than watching them fight each other. After the hullabaloo that was Battle of the Atom, the various X-Men series’ need a break, and this is a fun divergence until the next big event comes along. Oh, and speaking of which, I guess it has some ties to Inhumanity too.

Yes, thanks to the funky numbering of this issue, it is technically a tie-in to Inhumanity, the brand-new ongoing event dealing with the rise of new Inhumans, but it’s more accurate to say that Inhumanity is a circumstance in this issue of Uncanny X-Men rather than an organic fit to the narrative. It’s tacked on at the end, too, which means it will either be dealt with more in the next issue of Uncanny X-Men or forgotten entirely. Given the sharp-witted rapport Brian Michael Bendis writes between these characters throughout the rest of the issue, it’s a shame that he doesn’t incorporate the crop of new Inhumans in a more lively way. Otherwise this is a rousing one-off issue that shows a lot of discord between Young Jean Grey and the Cuckoos (aka The Stepford Sisters), the hesitation of Kitty Pryde as the new team member, and Emma Frost being surprisingly agreeable for once. Even those not reading this series on a regular basis will be able to get a basic understanding as to what these women are all about.

Aside from being a relatively removed story, Uncanny X-Men #15 also features a temporary change in artist to Kris Anka, who also designs the eye-catching cover for the issue. If you’re one of those that judges a book by its cover (it’s okay, so do I), take solace in the fact that Anka’s work looks even better on the interiors of this book. He draws a lot of expressive faces, and his work is infectious. You can’t help but smile when the girls faces light up when they’re presented with Emma Frost’s stockpile of cash; likewise, the awkwardness of Jean’s interactions with the other students becomes very empathic. If there’s one complaint to be made it’s that Anka’s faces all bare a striking resemblance to one another, making it difficult to immediately discern who’s who in some of the more crowded panels, but I’ve found that’s a problem in a lot of these X-Men books as of late. These teams are getting massive, so allowing them to break off into separate misadventures is not a bad course of action. At first it’s a little disconcerting for the female X-Men to talk about being powerful, independent women and then want to go off on a shopping spree, but I say let them have their fun.

Book Review: The Art of Epic