After months of waiting and anticipation, fans will soon finally be able to enjoy 2019’s heart-pounding romance and drama anime, Beastars, when it comes to Netflix this month. The series is being animated by Studio Orange, most known for its 2017 adaptation of Land of the Lustrous and their work on Black Bullet. Beastars is being directed by Shinichi Matsumi and written by Nanami Higuchi.

Beastars follows Logoshi, a shy and quiet gray wolf and his life as a student at Cherryton Academy. It is there that he faces the day to day struggle of being a carnivore. In this world of anthropomorphic animals, predator and prey co-exist together, but carnivores are often looked down upon by society and forced to hide their natural instincts.

Following the mysterious death of Tem, an Alpaca and one of Legoshi’s club mates in the drama club, the tensions between carnivores and herbivores at the school begins to rise. Legoshi will have to navigate both his complex relationships with his club senior and star of the theater, Louis the red deer, as well as a quiet little dwarf rabbit who runs the gardening club, Haru.

Netflix also announced the cast of the English dub earlier this month, which features:

The original manga is written and illustrated by Paru Itagaki and has been ongoing in Weekly Shonen Champion magazine since 2016. It won the annual Manga Taisho Award in 2018. Viz Media is handling the English release of the manga, with volume 5 hitting store shelves later this month.

Season 1 of Beastars will be released on Netflix on Friday March 13th. Plans for a season 2 are already underway. 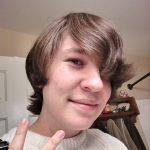