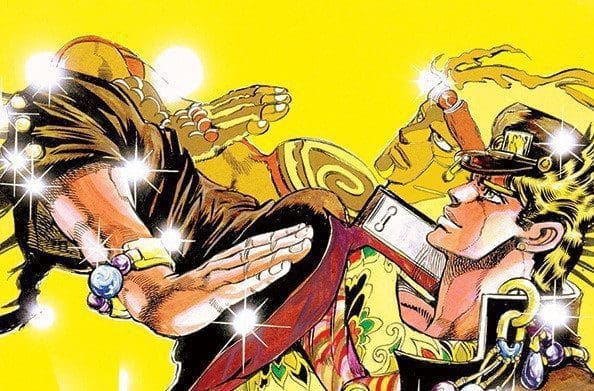 VIZ Media, LLC (VIZ Media), the largest distributor and licensor of manga and anime in North America, thrilled a packed audience of fans at the 2014 Anime Expo in Los Angeles this past weekend as it announced the much heralded return of creator Hirohiko Araki’s epic supernatural/action/adventure manga (graphic novel) series, JOJO’S BIZARRE ADVENTURE.

Volumes 1 and 2 of JOJO’S BIZARRE ADVENTURE: PART 3 – STARDUST CRUSADERS are now available digitally on VIZManga.com and the VIZ MANGA App for the iPad®, iPhone® and iPod® touch as well as for Android-powered smart phones and 7” tablets. The digital volumes also may be purchased through the Nook, Kindle, Kobo, iBooks and GooglePlay stores. Subsequent editions will be released every week for a total of 16 volumes. JOJO’S BIZARRE ADVENTURE is rated ‘T+’ for Older Teens and carries a digital MSRP of $6.99 US/CAN. In JOJO’S BIZARRE ADVENTURE, once there was a mighty bloodline of heroes: the Joestars. In the 1880s, Englishman Jonathan Joestar gave his life to defeat Dio, a megalomaniacal vampire. Now, 100 years later, Dio is back, and Jonathan’s descendants must travel to Egypt to destroy their ancestral enemy once and for all.

“VIZ Media’s original publication of the JOJO’S BIZARRE ADVENTURE STARDUST series story arc complemented the anime counterpart’s North American broadcast run and fan interest has endured ever since,” says Leyla Aker, Vice President, Publishing. “The series is a multi-generational paranormal adventure story with each section focusing on a different Joestar descendent as the main character. We’re very excited to bring this celebrated title back to North America and also give fans the opportunity to catch JOJO’S BIZARRE ADVENTURE from the very beginning later this Summer!”

The free VIZ Manga App continues to be the top application for reading digital manga and features a massive library of the most popular series in the world. Through the innovative VIZ Manga digital platform registered users are able to use one account to view their purchased manga across more devices than ever. New series and volumes are added every Tuesday. Fans can also find these titles for the NOOK, Kindle Fire, and Kobo ereaders, as well as in the iBooks and GooglePlay Stores. These dynamic digital platforms offer fans the opportunity to explore and enjoy a massive catalog of new and classic manga titles that spans more than 2,000 volumes across nearly 200 different series.

All manga volumes are available for purchase and download in the U.S. and Canada within the VIZ Manga application starting from $6.99 (U.S. / CAN) each and readers can also explore all titles with free Chapter 1 previews of every series. For more information, please visit VIZManga.com or www.VIZ.com/apps.

Download the free VIZ Manga App for Android and iOS devices at www.VIZ.com/apps.