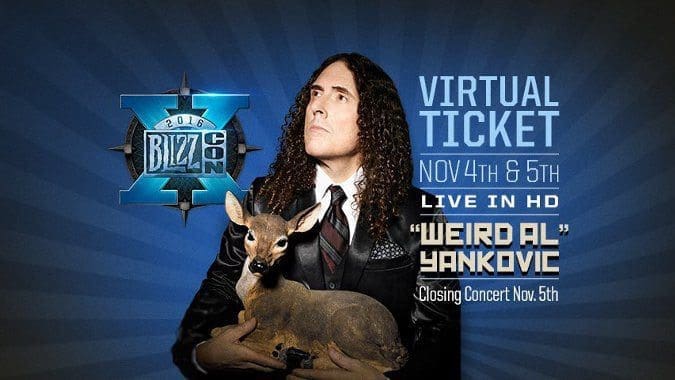 Watch the concert LIVE online with the BlizzCon Virtual Ticket—available to order now at www.blizzcon.com

Hoist your accordions and ready your battle-axes, because everyone’s favorite pop parodist is bringing some mandatory fun to BlizzCon! Blizzard Entertainment today announced that the legendary “Weird Al” Yankovic will be taking the stage on Saturday, November 5, to close out Blizzard’s two-day gaming convention with his epic multimedia rock and comedy live show. While tickets to Blizzard’s two-day gaming convention in Anaheim are sold out, gamers and Weird Al fans around the world can still watch the show live with the BlizzCon Virtual Ticket—available to order now at www.blizzcon.com.

With a catalog of hits spanning 14 studio albums, “Weird Al” Yankovic has delighted and amused fans with his satirical treatments of iconic pop songs, including “Eat It,” “Amish Paradise,” “Smells Like Nirvana,” and “Tacky.” Weird Al’s music has earned him four Grammy Awards, eleven more nominations, four gold records, and six platinum records. His latest album, Mandatory Fun, was released to critical acclaim in 2014 and was the first comedy album in history to debut at #1 on the Billboard charts.

“We’re super excited to close out our tenth BlizzCon with a performance from an epic showman—and fellow geek,” said Mike Morhaime, CEO and cofounder of Blizzard Entertainment. “Weird Al has entertained millions of people around the world with his hilarious music, and we’re thrilled that he’s bringing mandatory fun to the show and everyone following along with a Virtual Ticket.”

“I’m very excited to be playing at BlizzCon,” said Al, “because it’ll be one of the few times in my life where a significant percentage of the audience is even nerdier than I am!”
BlizzCon is an epic celebration of Blizzard’s universes and the global player communities that bring them to life. Taking over the Anaheim Convention Center November 4 and 5, this year’s show will be loaded with in-depth developer panels, thrilling esports tournaments, epic contests, and much more.

Though tickets to the convention have already sold out, viewers at home can still join the excitement by ordering the BlizzCon Virtual Ticket ($39.99 USD), which offers comprehensive live online coverage of both days of the event, including Weird Al’s performance on Saturday night. You’ll also be able to watch most of the concert in on-demand videos that will be available within a few days after the show, although some portions may be edited or unavailable. For the best experience, be sure to watch it live!

The Virtual Ticket also comes with a cache of commemorate in-game goodies for a variety of Blizzard games, including a pair of murloc pets in World of Warcraft, a convention-themed Bastion skin for Overwatch, and more.

In addition to the BlizzCon Virtual Ticket, DIRECTV customers in the United States have the option to watch the show from home by ordering the BlizzCon 2016 Pay Per View event, priced at $39.99 USD (includes access to the Virtual Ticket online stream).