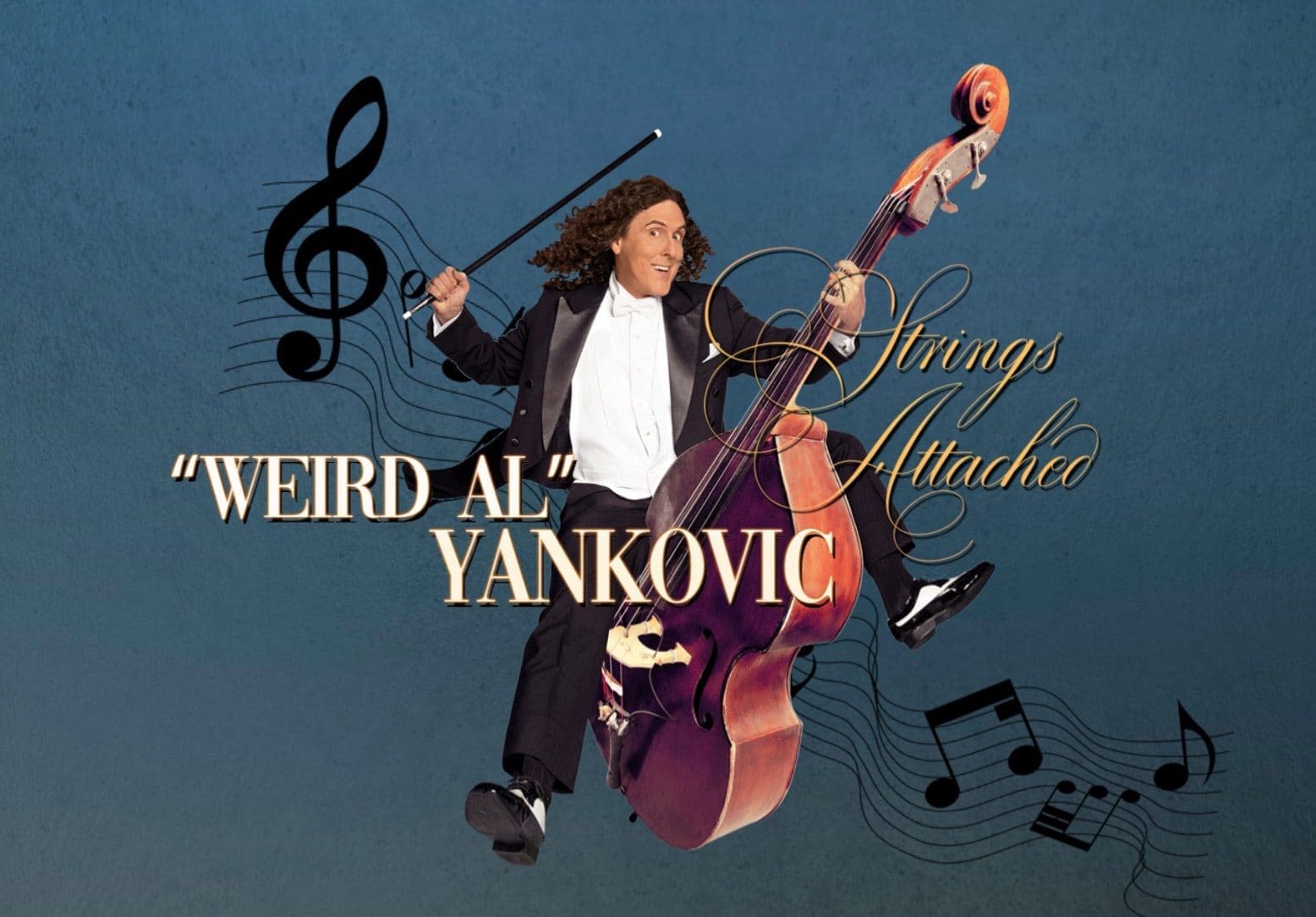 I had the privilege of attending the June 10 stop on Weird Al’s Strings Attached Tour at the venerable Hard Rock Live venue in Orlando, Florida. The “Strings Attach” moniker was assigned because Al was going to be performing this tour with a 41-piece orchestra (some with a full 71 pieces).

Going into the concert, my biggest concern was whether the orchestra would add to or take away from Al’s lyrics and typical goofy gyrations. His last tour, the 77-date Ridiculously Self-Indulgent, Ill-Advised Vanity Tour, scaled everything down, removed the costume changes and flashy gimmicks, and focused solely on deep cuts and non-parodies.  In addition, every tour date had a different set list, so depending on the date you chose, you could be attending a vastly different concert from your buddy who attended elsewhere.  I attended the previous tour in Augusta, Georgia, and I probably would’ve given it a C+.  Despite the fact that I’m a big Weird Al fan, there are songs I love, songs I like, songs I could give or take, and songs I really dislike.  The Vanity tour’s focus on deep cuts wasn’t necessarily the issue; I just got unlucky with the song choices on the set list.

So, back to the Strings Attached Tour.  Since Al is one of my heroes, I splurged for the VIP seats and was in the fifth row, center.  I’m not saying that to brag; I’m mentioning it because I want to point out that I had good seats, so my review isn’t tainted because I was far back or in an obstructed-view seat. I can’t speak for other venues, but being in the center in the fifth row of the Hard Rock venue was hard to beat.

As far as the stage setup, the orchestra seating on the stage took up a large portion of the real estate, which did little to quell my fears that this was going to be another gimmick that was going to take away from, not benefit, the show.  However, as soon as the orchestra took the stage, things went up the entire evening.

The show started with the orchestra flexing their musical muscles by performing three instrumental numbers, all from popular movies that catered to the Weird Al (AKA geek/nerd) crowd: the Indiana Jones theme, the Mission: Impossible theme, and the Superman theme.  All three songs were pretty cool and did a great job of pumping up the crowd.

After a brief intermission, Al took the stage and the show kicked off in earnest.  The set list this time out was an interesting mix of deep cuts and Al’s more mainstream stuff.  Clearly, when assembling this set list, Al and the gang were trying to figure out which songs would most benefit from having an orchestra playing along instead of trying to stick to a certain album (since he hasn’t released one recently), just popular songs, or just more obscure stuff (like his last tour).  Since the parameters for this tour were a little odd, that meant the set list was just as odd, but in a good way.  Things started out with an interesting blend of songs, including two of Al’s “long form” songs: Biggest Ball of Twine in Minnesota and Jackson Park Express.  Other less-frequently-heard songs like Don’t Download This Song made excellent use of the orchestra, while classic Al “love song” One More Minute really didn’t benefit from the 41 extra people.

As the evening progressed, Al began playing shifting from an eclectic mix to his more popular stuff.  Again, certain songs like Smells Like Nirvana didn’t really need an orchestra, while Amish Paradise and Jurassic Park seemed custom made for it.  We were also treated to Dare to be Stupid and White and Nerdy, both with costume changes and typical Al goofiness.  There were a couple of clunkers, both relatively short songs that some people might like, but I don’t: Harvey the Wonder Hamster and Weasel Stomping Day.  Even typing those two song titles makes me cringe.  Both of the songs were fillers on their respective albums, and I think Al was making light of that by performing them during the show.  However, both were about a minute long, so it wasn’t the end of the world.

The show, as has been the case for the last few tours, ended with the Star Wars-themed finale.  In addition to The Saga Begins and Yoda, we were treated to the orchestra performing the theme to Star Wars, which was a cool treat.

All in all, I enjoyed the concert.  Again, I don’t know if the orchestra really did much for me, except on a few songs (like Jurassic Park and Amish Paradise), but the set list was cool and it was pretty much a prototypical Weird Al show (complete with funny between-song video clips when there were costume changes). I still believe, even if you’re not a fan of the guy in general, that you’d have a fun time if you went to see him once, especially if you were a child of the 80s or 90s.  He puts his all into his performances (even if he’s getting a little older and has a hard time keeping up with some of his faster-paced songs) and it’s family-friendly entertainment that almost everyone can enjoy.  If I had to give the show a grade, I’d probably give it an A-.  The half letter grade is for a couple song choices and the orchestra kinda’ being shoehorned in on a few songs.  Neither of these things ruined the concert for me, but I can’t give it a straight up A because of them.

Anyway, the tour just started, so there’s plenty of time to catch Al in pretty much state except Florida (where he began the tour).  You can look for tickets HERE.

You can also read the interview I did with Weird Al before this tour kicked off right HERE and read about some of Weird Al’s original songs right HERE.

It’s amazing that Weird Al is still going strong after almost 40 years of performing.  Even now, with people posting countless parody videos and songs on the Internet, he’s still head and shoulders above almost every “comedy/novelty” act ever.  I’ve always thought he was a great performer, and if you attend one of his shows and listen to some of his music, you might just be convinced that’s pretty amazing, too.