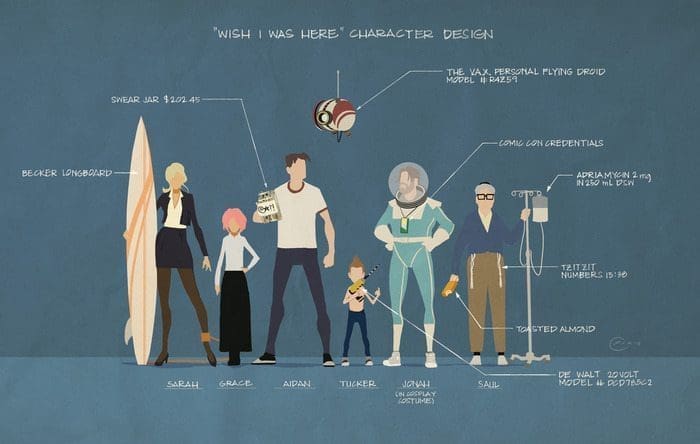 The last movie Zach Braff directed for the big screen was Garden State ten years ago.  This time around, with social media much more ingrained in our culture, he brings us his next film courtesy of a kickstarter campaign he began just over a year ago.  Whether his choice of funding was the right way to go is a matter of debate, but the film did get completed so hopefully the finished product can be appreciated without too much predisposition.

In Wish I Was Here, Zach Braff plays Aidan, a man who struggles as an actor and is supported by his wife Sarah(Kate Hudson).  His two kids, Tucker and Grace, attend a very upscale Jewish school, but after his father, Gabe(Mandy Patinkin), is unable to continuing supplementing their tuition they are pulled out.  Aidan and Sarah decide the kids should be homeschooled for the last semester.  With his father gravely ill, Aidan begins to assess his life up to now and tries to assert more parental guidance on his children, with mixed results.  His son Tucker(Pierce Gagnon) is the precocious type and never goes a moment without a smartass comment.  Grace(Joey King) is more reserved and apprehensive in her decision making.  Her devout Jewish lessons have made her resist any display of independence and creativity.  The family slowly begins to have conversations that have been on hold due to their previous hectic lifestyles.  One other character I should bring up is Aidan’s genius, but directionless, brother, played by Josh Gad.  He lives in a trailer with a view of the coast and doesn’t talk to his father anymore fearing his disappointment.

In comparison to his previous film, Garden State was a nice anthem to college grads and twenty-somethings who were at a crossroads in their life.  It told the story of a man who recently lost his mother and returns home to bury her while also getting reacquainted with his old life.  The mix of our medicated lead and alternative music aided in our view of this living dream.  Wish I Was Here puts that similar character in a home with a family years later and, even though he found direction in his life, he still lacks a purpose.  He has to deal with a dying father this time and his wife begins to question his priorities with his career and family.

The story suffers from too many comedic lines which, although funny, make it difficult to feel an emotional connection to the characters.  I almost felt like I was watching the pilot to a tv series that hasn’t found its footing yet.  Kate Hudson plays a great mom and wears the “weight of the world on her shoulders” attitude very well. The best scenes involved Mandy Patinkin.  As the father, and grandfather, he continues to impart his wisdom, or criticism, on Aidan while he still has the ability to.  His acting feels genuine so he helped me get into the story more.  Would his sons find their purpose in life and take care of the family when he’s gone? Also Josh Gad’s character Noah is pretty good, but his performance stands out more near the end.  Joey King as Grace shows what a great young talent she’s becoming.  You also get a nice scene between Zach Braff and Jim Parsons at an audition for a Sci-Fi series.

Much like the movie Garden State, the film is peppered with eccentricities and very imaginative daydreams.  It also has a very robust soundtrack which seemed often times distracting and could have been dialed down.  It worked better in Garden State, more or less, but here it seems the music was trying too hard to channel our emotions rather than having the narrative do that for us.  Each scene almost felt like it was becoming a music video.

I would say this movie succeeds more as a comedy than a drama even though the dramatic themes are what make it interesting.  It’s just not edited or directed in a way that makes you invest in the characters enough to appreciate the outcome.  As a parent I appreciate seeing the family band together to cope with an impending tragedy.  Aidan has some great scenes with his kids on the road and around the house.  His kids in fact have most of the funny lines.  Zach Braff has an interesting daydream involving space armor and a strange planet, which is fun to watch, but you won’t care after the fifth time you see it.  I did also enjoy getting moments involving cosplay in the movie and a San Diego Comicon cameo.

I recommend this movie to those who have seen Garden State and enjoy Zach Braff’s style of directing, but if you want to enjoy a film about a family in turmoil with a heartwarming ending and eccentric extras, there are better options already out there.  Zach Braff writes a good script, but when executed to screen I find the result appears too orchestrated and forced rather than organic.  It is a decent comedy so I won’t diminish that aspect except to say it hurt itself trying to be strange and funny rather than being a drama that happens to make you laugh.

About Wish I Was Here

Synopsis: Aidan Bloom is a 35-year-old man who finds himself at major crossroads, which forces him to examine his life, his career, and his family.