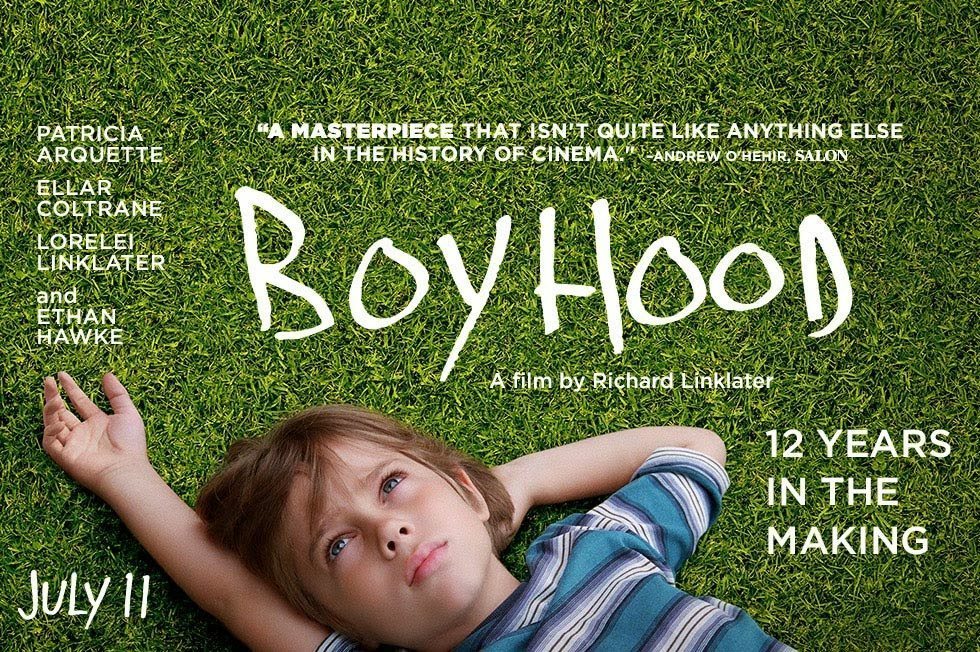 Richard Linklater has a secret. The director known for youth culture films like Dazed and Confused and Slackers has been exploring the juxtaposition between film fiction and the reality of time and growth. While many films use different actors to portray characters as they age, between 2003-2014 Linklater has been quietly filming the fictionalized boyhood of Mason Hanks Jr. (Ellar Coltrane) from age six until he graduates high school. The primary cast includes Ethan Hawke, with whom Linklater often works, as Mason’s frequently absent father who spends the first part of Mason’s childhood acting like a child himself, the talented Patricia Arquette aging gracefully as his professor mother who tends to jump from one bad husband to another, and Mason’s older sister played by Linklater’s own daughter Lorelei.

We watch as the baby-faced Mason navigates the world of childhood and adolescence through subtle naiveté giving way to the mild exploration of drug use and alcohol in his early teens before he earnestly begins an endearing relationship with not only his father, but also his own reality. Hawke’s Mason Sr., for the first half of the film, fails to evolve, picking up his son and daughter in his GTO muscle car for sporadic weekends, showering them with gifts, and trying to avoid fighting with his ex-wife. When daughter Sam hits the social circles of high school and wants less to do with father/daughter bonding times, we see a deeper relationship develop between Coltrane and Hawke. There’s a gorgeous scene between father and son on an overnight camping trip where the audience begins to see Coltrane shift from the young boy unsure of his acting chops to a thespian who can hold his own against the veteran Hawke. They delve into discussions of dating, sex, and art as we watch the beginning of a strong bond between father and son.

One way Linklater shows the passing of time in this film is through the evolution of Patricia Arquette who had two children way too young, and then struggles to make tough decisions to better her own life and career. The first of these is to move her children to Houston, Texas (many of Linklater’s films are filmed in and around his hometown) so she can get her teaching degree and have the support of her own mother in raising the children. As Arquette eventually becomes a sociology professor, she limps along from one failed marriage to another. She ultimately succumbs to the inevitability that we will all die, our children will leave home, and we struggle to collect junk only to spend our waning years finding ways to remove that same clutter from our lives. While her realization late in the film may sound existentially morbid, the subtle reminders that our lives do not happen in huge, cinematic sweeps of awesome events lends credence to the verisimilitude of Linklater’s film. Given his filming schedule and the uncertainty of age and experiences of his cast, the director could not guarantee anything except the authenticity of life being lived.

Linklater scores with Coltrane himself who grows into a lanky artist and could’ve easily stepped from many of Linklater’s other films. I was struck by the similarity between Hawke and Coltrane’s features later in the film only to be reminded that it was all by chance. What wasn’t by chance was the slow evolution of Hawke’s carefree character, who later sells the GTO for a minivan to traverse Texas with his new wife and baby boy. Even as Hawke becomes the stable father figure and trades his bowling shirts for a dad sweater, I enjoyed that Linklater allows Hawke to keep his cowboy boots throughout his evolution, demonstrating a yearning nostalgia for his own boyhood.

As Mason (now a teen) continues to question the nuances of the world around him while navigating his friendship with his father and his continued unconditional support of his mother, sister Sam quietly drifts along in the film. Newcomer Lorelei Linklater has a few humorous scenes, including her eight year old self annoyingly singing Britney Spears, and Hawke later embarrassing the now high schooler with a public discussion of birth control and condom use. However, her character isn’t as fleshed out as I would’ve liked to see.  Early in the film, Arquette yells at young Sam “to cut her horseshit attitude”. Later in the film, Sam, now a college sophomore, is complaining about paying laundromat fees, where Arquette repeats the exact same “horsehit attitude” line, indicating Mason’s sister was perhaps added to give the director’s own daughter a step up in the business.

While watching the film, I questioned the necessity of filming the principal actors for a dozen years, but by the end of the film I was in love with the process. Linklater’s direction gave an uncanny authenticity to the relationship between dysfunction and idealism that exists in any family. Mason’s final comments in the film that “we do not seize moments, the moments seize us” demonstrates to this reviewer that Richard Linklater’s decision to turn on the camera and record the uncertainties of life makes Boyhood a gorgeously, original narrative.

Synopsis: The story of Mason Hanks, jr. (Coltrane) from the time he is 6 until he leaves home for college. Shot in real time, Linklater filmed this movie over the course of 12 years using the same actors as they age naturally. Ethan Hawke and Patricia Arquette play Mason’s divorced parents, and Linklater’s own daughter Lorelei rounds out the principal cast as the older sister.