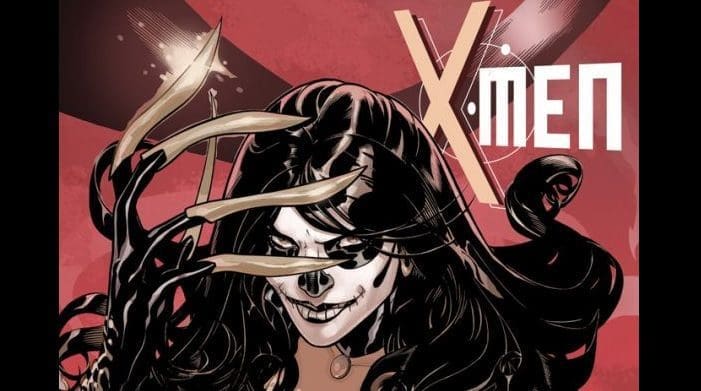 Battle of the Atom is over and Brian Wood’s X-Men can happily move on to a brand new arc, though there’s still some baggage X-Men #7 can’t shake loose. Kitty Pryde has left the team due to…reasons and Storm and Rachel Grey still aren’t seeing eye-to-eye. While I’m not opposed to a bit of dissention within the ranks of the X-Men (I did just read Battle of the Atom after all), the drama is wearing thin. Instead of finally squashing it once and for all, Wood forgoes the inevitable reconciliation for yet another issue and introduces two brand-new team members–Karima Shapander and Monet St. Croix—along with a brand new threat in the resurrected Lady Deathstrike. It’s a worthwhile distraction from the conflict between Storm and Rachel, but their squabbling is something that needs to get addressed soon.

Being away from the X-Men universe (and comics in general) for as long as I have been, I had no idea that Lady Deathstrike was dead, or who Karima and Monet are. Wood makes an admirable effort of introducing readers to both new members of this X-Men team, but given the negative reaction of Jubilee to Monet being brought aboard, this is definitely one of those instances in comics where keeping up with the history of characters leads to being privy to more information than a newcomer like me. Don’t get me wrong, the demonstration of Monet’s power set in this issue as she’s attacked by Lady Deathstrike is impressive, but seeing as I just read an entire event with dozens of varying mutants, seeing another telepath is not enough to get me behind this character as the reluctant muscle of the team. So much of this issue is devoted to spectating Monet that the ordeal with Rachel and Storm–still lingering from the first arc of this series–is reduced to one throwaway panel. Now that Karima is on the team, perhaps she can once and for all end this debate between the two characters as to whether or not they should have tried to kill her way back in issue #3.

Both visually and from a narrative sense, the origin of this new Lady Deathstrike is X-Men #7’s rallying point. As someone that only knows of the character through the cinematic side of this universe (in X2: The Last Stand to be precise), I am infinitely intrigued by the new look of the character, brought to stunning life with Terry Dodson’s pencils and Rachel Dodson’s inks. It’s a bit of a head-scratcher to have Deathstrike being resurrected inside the body of a young, hot Latina, but the design of the character is captivating. Her Día de Muertos-inspired makeup and black and silver ensemble is certainly an attention-grabbing and cover-worthy image. Dodson’s depictions of the other characters that make up this issue is a little less exciting, however, as his Jubilee, Karima, and Monet bare striking resemblances to one another that confuses the eye just momentarily in some panels. It’s nothing that takes away from an otherwise well-drawn comic still worthy of its adjectiveless namesake