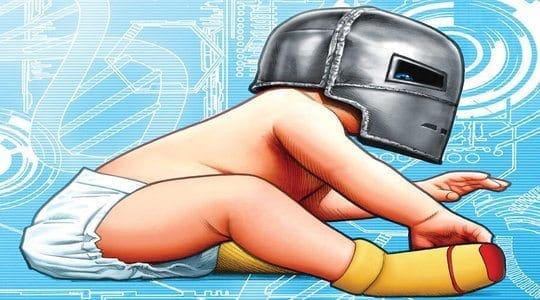 This week, there are lots of great books coming out this week, but instead of highlighting them, lets talk about more important things – “Iron Man 3”! Directed by Shane Black and screenplay by Drew Pearce, “Iron Man 3” will pit Tony Stark against an enemy whose reach has no bounds – The Mandarin! Who will come out on top? Find out Friday, May 3rd!

While we wait till Friday, here is some cool “Iron Man 3” stuff to look out!

The all-powerful Mondo will have three “Iron Man 3” posters go up for sale on Friday, May 3rd. Check them out below and check out the details here!

And lastly, how about this guy… Granted, this issue come out three years ago, but I believe this will be perfect reading material if you want to know the origin of the Mandarin.

“The Mandarin is a collection of lies, stories, myths, and legends. But two things are true: He wears, upon each finger, an alien weapon of unimaginable power…and he’s going to kill Tony Stark. Is he a violent street crook born in a brothel? The scion of an aristocratic dynasty? Was his father was a petty criminal or an ambassador? Was his mother a British noblewoman, or maybe a dragon-chasing wastrel lost in the underbelly of the world? He’s a murderer, a businessman, an artist, a terrorist, a hero. And this is the story of his life.” A classic pulp from the 30’s returns in this modern take on a seminal character that inspired several well-known comic icons. Tony Quinn is a brash Defense Attorney to the mob who compromises his ethics for financial gain. When he refuses to cross the line and commit murder, he is tortured and blinded by his gangster employers. But when a fortuitous meeting with a covert agency gives him a chance to make amends, Tony transforms into the Black Bat and embarks on a redemptive quest to right the wrongs of his past. It’s Swamp Thing vs. Superman for the fate of Metropolis — and why are all of Swamp Thing’s worst nightmares coming true? Plus: Who is the mysterious Capucine? The Ice King takes the throne as the true king of Atlantis-but who will be the first to kneel before him?

The battle against the Rot has left Buddy’s family in ruins, and now they must withstand another force trying to subvert him: his own celebrity! IT ENDS HERE! ‘SUPERIOR NO MORE!’

The hottest comic in comics comes to a turning point that will get you angrier than you were after Spidey #700!

The time has come to see who will live, who will die, and who will emerge as the one, true Superior Spider-Man! We are faceless. We are limitless. We see all. And we do not forgive.

Who defends the powerless against the GREEDY and the CORRUPT? Who protects the homeless and poverty-stricken from those who would PREY upon them in the DARK OF NIGHT?

When those who are sworn to protect us abuse their power, when toxic government calls down super-human lackeys to force order upon the populace. . . finally, there is a force, a citizen’s army, to push order BACK. Let those who abuse the system know this as well: We have our OWN super humans now. They are not afraid of your badges or Leagues. And they will not be SILENCED. We are your neighbors. We are your co-workers. And we are your children. Joe Fitzgerald was a mob enforcer until the day he met Laura, who convinced him to leave that world behind. Before quitting, Joe agreed to one last job, little realizing that the man he’d been sent to kill was deeply involved in demonology.

He survived Joe’s attempt and came after him, fatally wounding Joe and killing Laura. As he lay dying, an angelic force (who may or may not be what she appears) pointed out that where she is going, he can’t follow, and where he is going, he wouldn’t want her to follow.

But if he will agree to work for them as a different kind of enforcer, they will bring him to life and keep on bringing him to life every time he is killed in a righteous cause. The reward: for those five minutes of death, he will be with Laura again.

Would you endure an eternity of pain and death, dying over and over, to be with the woman you love for just five minutes each time you died? Most people might say no. But Joe Fitzgerald isn’t most people. The most acclaimed new book of the year continues!

Who pulled the trigger?

It’s murder, mayhem, and grease paint make-up for the money, kids — and that means playtime is over, Monsieur Hulot. Caw caw. Micheline. Layton. Two voices that defined Iron Man come together to tell the untold story of his most dire hour – Armor Wars 2! THE SECRET ORIGIN OF TONY STARK

Death’s Head and Iron Man team-up to hunt down a genocidal criminal. Not the problem.

A shipful of dead badoon. Not the problem.

What Tony finds in the depths of that ship: the problem. Big problem.

The lead into the biggest Tony Stark story of the year.

Chuckie is blogger for fine sites such as Geek News Network and Comic Book Therapy. Burrito enthusiast would be the best way to describe him. Follow Chuckie on twitter @dweebofthedead to read just how much he loves Batman, kind of like a man-crush, but not really. Ok–really.
[SlideDeck2 id=9304]

Travel through Time with the PREVIEWS Exclusive Doctor Who Diary