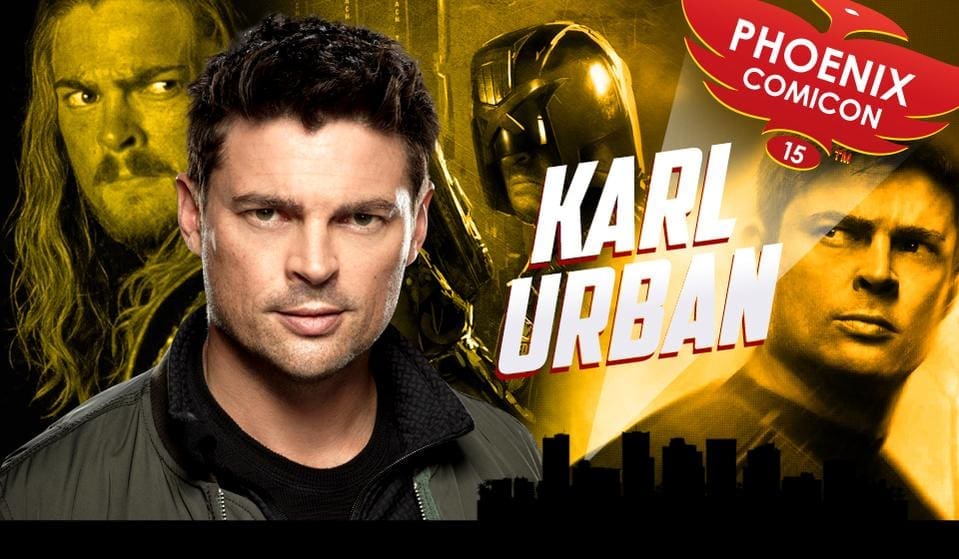 From Star Trek and The Lord of the Rings, Karl Urban is going to be at Phoenix Comicon 2015! Hailing from New Zealand, Karl known for playing Éomer in The Lord of the Rings trilogy, Dr. Leonard “Bones” McCoy in Star Trek and Star Trek Into Darkness, Kirill in Bourne Supremacy, Vaako in The Chronicles of Riddick and Riddick, Cupid and Julius Caesar in Xena: Warrior Princess, and Judge Dredd in the 2012 film Dredd among many other roles. Recently Karl has been seen in Almost Human as the main character John Kennex. The Golden Globe, BAFTA, International Emmy and Critic’s Circle nominated Jason Isaacs began his acting career at Bristol University where he studied Law, but found himself acting, writing and directing most of the time. After graduation, he trained for three years at London’s prestigious Central School of Speech and Drama. In 2000, his breakout role as Colonel William Tavington in Roland Emmerich’s feature film The Patriot garnered him numerous nominations including one from the British Film Critics’ Circle.

Isaacs has won multiple awards and nominations for his television roles including the BAFTA Best Actor nomination for The Curse of Steptoe and a Golden Globe nomination for Best Performance by an Actor in a Mini-Series or Motion Picture Made for Television for the BBC’s The State Within. The critics raved over his performances in Scars, Lynda LaPlante’s Civvies and as Michael Caffee in three seasons of the Peabody Award-winning Brotherhood. He then starred as Jackson Brodie in the BBC’s Case Histories, a role that garnered him various other nominations including an International Emmy for Best Leading Actor. Case Histories also won the BAFTA Scotland Award for best drama series. He produced and starred as Detective Michael Britten in NBC’s critically acclaimed dual-reality drama Awake. He has also appeared in The West Wing and Entourage. One look at Katee Sackhoff and her breakout role as Starbuck and fans everywhere forgot all about that other guy who played the character. Sackhoff’s rough and ready portrayal of hotshot pilot Kara “Starbuck” Thrace has been stealing scenes on the critically acclaimed Battlestar Galactica for years now, turning heads and winning a Saturn award along the way. The actress known for fighting evil robots on Galactica became one herself when she played the villain in NBC’s update of the classic Bionic Woman series. Robot or not, Sackhoff’s talent is a force to be reckoned with. Ron Perlman is going to be at Phoenix Comicon 2015. Known as Vincent in the television series Beauty and the Beast, he earned a loyal fan following and a Golden Globe. In 1995 he took on what would be one of his first leading roles as One in The City of Lost Children directed by Jean-Pierre Jenuet. Further collaboration with Jenuet eventually sent him into space him alongside Sigourney Weaver in 1997 as the gun-for-hire Johner in Alien: Resurrection.

He became friends with director Guillermo del Toro during their collaboration on Cronos in 1993. This friendship lead to role for which Perlman is best known; Hellboy. In 2004 he made his first appearance as Hellboy on the silver screen and reprised the role again in 2008 in Hellboy II: The Golden Army. Both Hellboy films were directed by Guillermo del Toro. The pair collaborated most recently on Pacific Rim in 2013 where Perlman portrayed Hanibal Chau, a black market dealer of sorts specializing in alien biology.

In addition to stage, film, and television, he has also lent his voice to several animated series, features, and video games such as The New Teen Titans (2012), Tangled (2010), Hellboy: Blood and Iron (2007) and Halo 3 (2007). In 2008 he returned to his television roots as Clarence “Clay” Morrow in the hit FX television series Sons of Anarchy. After five successful seasons his story arc came to a conclusion in 2013. In 2014 Perlman starred in a pilot for Amazon’s Prime video service called Hand of God and was most recently seen on two episodes of the hit NBC series The Blacklist. Lexa Doig is known for her roles in Gene Roddenberry’s Andromeda, where she starred as the Andromeda Ascendant’s sophisticated artificial intelligence system, TekWar, CI5: The New Professionals, JasonX, Traders, The 4400, Stargate SG-1, V, Smallville, and Continuum, among many more. Jae Lee is a Korean-American comic book artist, known for his dark and elegant style. In 1990, he became one of the youngest artists ever to work for a major publisher. He is an Eisner Award-winner for his work on Marvel’s The Inhumans.

The art from his collaboration with writer Grant Morrison on Fantastic Four: 1234, was featured in an exhibition at The Society of Illustrators in New York City. In 2007, Lee was hand-picked by Stephen King for a six-year collaboration on the Dark Tower comics and novels. Arthur Adams is an award-winning artist who became an immediate fan favorite as the penciler on the critically acclaimed 1985 Longshot mini-series. His decades-spanning career has included cover and interior work on such titles as Batman, Superman, Avengers, Spider-man, X-Men, New Mutants, Gen 13, Godzilla, The Authority, Danger Girl, Excalibur, Ultimate X, and Hulk, just to name a few.

He is also the creator, writer and artist on Monkeyman and O’Brien. More recently, in addition to covers to many of Marvels top books, Adams illustrated Guardians of the Galaxy Team Up #1 for Marvel. Danielle Panabaker from The Flash is going to be at Phoenix Comicon 2015! Known for her playing Caitlin Snow on the CW adaptation of The Flash and also appearing on Arrow, Danielle is also known for her work on Justified, Friday the 13th, The Crazies, Bones, Shark, Grimm, and Sky High. Mary McDonnell is a two-time Oscar-nominated actress who is known for her dynamic character portrayals in both period and present-day screen roles. McDonnell currently stars as ‘Captain Sharon Raydor’ on the TNT’s hit drama series, Major Crimes, the spin-off of the series, The Closer where McDonnell originated the role and earned a Primetime Emmy Nomination.

On the small screen, McDonnell starred in four seasons on the Syfy Network’s award-winning series, Battlestar Galactica in her critically praised performance as the President of the Universe, ‘Laura Roslin.’ The role earned McDonnell a Peabody Award and AFI deemed the series ‘TV Program of the Year’ for two years in a row. McDonnell garnered an Emmy nomination for her recurring guest role on the television series ER. Some of her other television credits include the ABC hit-series Grey’s Anatomy, the CBS series High Society, TNT’s adaptation of Arthur Miller’s The American Clock, the critically acclaimed CBS movie Behind The Mask, and Lifetime’s Two Small Voices. Get your tickets now before the prices go up at the door! Purchase them online at Phoenix Comicon’s website HERE before it’s too late!