Geek News Network
Home Events Conventions A Cape Among the Cogs: An Observation of the Wild Wild... 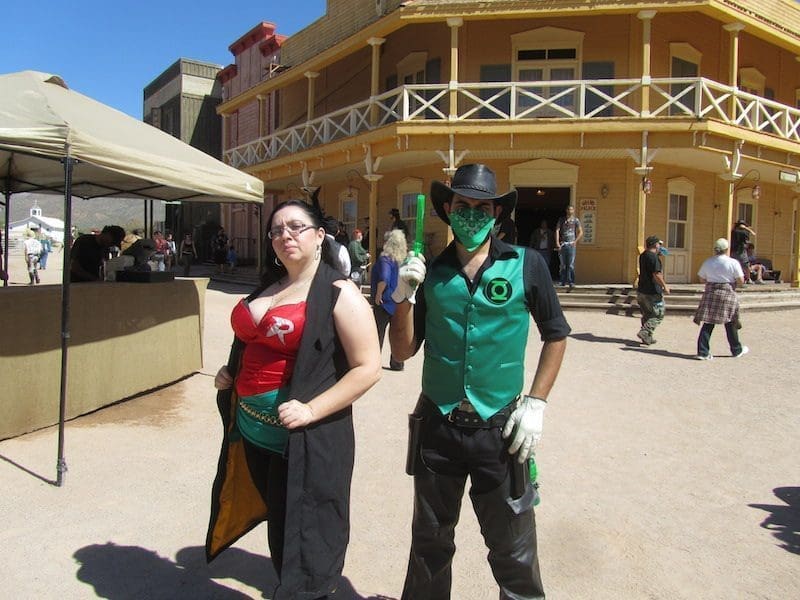 I can’t deny it: I’m a superhero guy. Capes and cowls are my thing. For as long as I’ve been attending comic book conventions, steampunk has had a presence, albeit a minor one among the cavalcade of familiar superheroes and sidekicks. Yet despite an increasing level of experience in attending conventions, one thing I could have not have imagined prior to seeing it for myself was an entire convention celebrating steampunk. No matter the leaps of logic I make on a weekly basis when pouring over the latest issue of Batman or X-Men, I could not fathom something like Wild Wild West Con III at Old Tucson Studios in Tucson, Arizona. Once I was there, however, a new unfathomable sensation washed over me, one of feeling utterly out of place. Being in the presence of hundreds of costumed enthusiasts should not have been a foreign experience for someone used to attending conventions, so why did I suddenly feel like Marty McFly in Back to the Future III when he arrives in 1855?

It could have something to do with the majority of the dress code being from the turn-of-the-century or the fact that I was literally standing inside a western movie facade theme park, but in retrospect, I came to a conclusion, if not an epiphany. It opened my eyes to an aspect of steampunk that I had never had occasion to think about before. Rather than the practice of traditional comic book convention cosplay, emulating a specific hero or villain, the steampunk convention is about embodying a concept with the utmost freedom of creativity and ownership. It’s that indefinable quality that I found difficult to overcome at first, but it’s what makes the idea of steampunk so ineffably unique and appealing.

As a result, the costumes that people don become a window into the imaginations of those who wear them, which is at first a bit disorienting for someone like me used to the confines of pre-ordained costumed heroes. But since these steampunk creations are largely invented by the person in costume, no two attendees at the Wild Wild West Con are alike. You find there’s a camaraderie between cosplayers that goes beyond the simple, “I like your costume” and ventures into, “How did you do that?” There seems to be a learning experience occurring each time people in costume meet up with one another, and the knowledge of how and what to make within the steampunk genre appears endless if the costumes on display during the Wild Wild West Con were any indication. I saw people in military general uniforms conferring with those in western gunslinger attire, and there was never a feeling that one was more “belonging” in this environment than the other. If anything, there was an overwhelming engendering of acceptance and constant sharing of ideas.

From what I could observe, steampunk is a very sharing culture of cosplayers, and that is evident even in the vendors hawking their wares in various tents on the Old Tucson property. One vendor displayed a sign stating that she was open to barter with other vendors. I often saw people in costume talking to vendors (who were all decked out themselves) about their various accoutrements, explaining how their costumes were created, what materials were used, etc. Wild Wild West Con III was a large gathering of steampunk superfans, but more than that broad statement, it was a network for attendees to learn from like-minded individuals and improve on their costumes for the next year. I know I took in a lot of ideas that I hope to parlay into my first steampunk costume when the Wild Wild West Con comes around again next year.