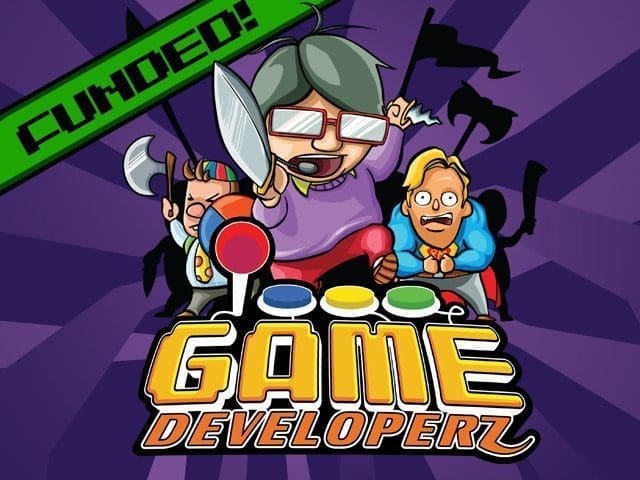 For those among us who enjoy quirky card games and parody games revolving around the geek fantasy of developing games, Onion Squire is rolling out their project: Game Developerz.

Game Developerz is a hysterically fun and innovative card game from Onion Squire. Players take on the role of a game developer who’s trying to develop and release a game. The game includes 4 different types of cards: Company, Asset, Feature, and Random Event cards. Company Cards provide a unique “perk” for you during the game. Asset cards help you advance your development cycle for your game. In order to finish your video game, you need to develop six Features.

The game design has some very fanciful illustrations which not only reinforces the spoof-esque nature of Game Developerz but gives a few hearty laughs when you find out you’re playing as “Electronic Farts.” Game Developerz has gotten nothing but rave reviews in terms of play-ability, technical design and overall fun. I had a chance to sit down with Co-Creator of Game Developerz, Mr. Marco Tonetti and ask some questions about the project. Without further adieu, here’s his responses.

GAME DEVELOPERZ is an original card game you are going to love!

The game is set in the computer game development world and is a funny kidding of all the dynamics and people in a gaming studio as well as all the actors of the games industry in general. Each player is put in the shoes of a gaming studio working for some of the most important brands in the gamez industry such as Electronic Farts, Ubiflop, Nightvision Lizard and so on. Your goal is to develop and release a videogame.

What makes Game Developerz unique among it’s competitors such as munchkin for example.

We have the most important people from the games industry supporting us. As you can see below:

Up to now a prototype of the game has been introduced to just a few important people and legends from the games industry. They wanted to help and give a feedback, and they all ended up being very excited about the game!

Ron Gilbert, Creator of Monkey Island: “The art is great, the writing is funny and the humor skewers the game biz perfectly. My kind of game.”

Nolan Bushnell, Creator of Pong: “The graphics look good and I like the concept of the game.”

Jarek Kolar, Senior Producer at 2K Czech: “We were really entertained, especially because a lot of these cards reflect some real situations during our development, and the cards are really funny.”

They all say it’s a very good game, I think we shall trust their opinion.

On the other hand, from a gameplay point of view. We have several different new mechanics and gameplay layers that make this game unique in its genre.

What are the key differences between a successful kickstarter campaign and one that falls short in your opinion?

Another key element is media exposure. It plays a fundamental role in the whole thing.

Are there any plans to use kickstarter to fund future titles from Onion Square?

Of course! At the end of this campaign we will work hard to fulfill it and then we will start working on a new project that we are planning to introduce to kickstarter by the end of the year or in Q1 2015.

Game Developerz is still up on kickstarter and has 16 days left to go at the time of this writing so if you’re tired of playing Cards against humanity for the 10,000 time or just want a new party game, check out Game Developerz.