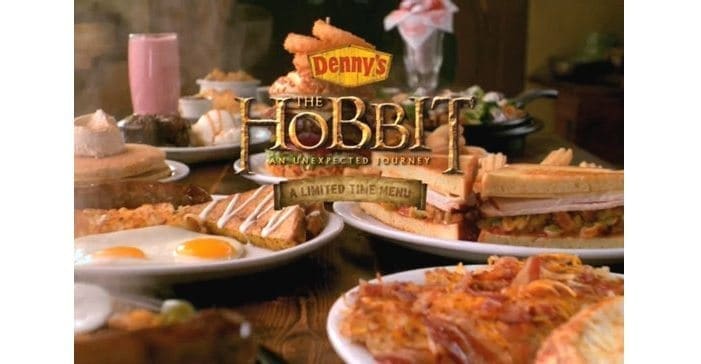 The Hobbit Menu is back at Denny’s and this time they brought a dragon! Just in time for the theatrical release of The Hobbit: The Desolation of Smaug, America’s largest chain diner has brought back this Tolkien themed menu with offerings that a Hobbit might chow down on (should they find themselves needing to sober up at 3 AM, that is).

Some of you may remember Denny’s previous Hobbit themed promotion in November of 2012, (I know this geek does!) and whether you love Denny’s or not, you have to give them credit for their creative marketing as of late. However, this Hobbit menu is slightly different than it’s predecessor. Several of the previous incarnation’s items have made the return, while others have been replaced. I hope you didn’t like Gandalf’s Gobble Melt or The Ring Burger… because you’ll be sorely disappointed. We here at The 3 Drunk Geeks love The Hobbit, and we love food even more. So as soon as we heard of this culinary adventure, we put plans into action to give it a try. Slightly drunk, myself, Neil and his girlfriend Jessie made our way to the local Denny’s to find out if this was indeed a meal fit for a Hobbit.

Our waitress was hitting on me, and ended up giving us an extra shake. I felt really bad when I told her I was gay.

The first new item to the menu this year is Bilbo’s Breakfast Feast (Pictured Above) and it includes 2 Scrambled Eggs With Spinach and Mushrooms, Hearty Breakfast Sausage, Hash browns, and Honey Cake French Toast. While the eggs were “eggceptional”, they were still eggs with spinach and mushrooms, and in reality, nothing to write home about. The clear reason to buy this breakfast is easily the sausage and the french toast. The hearty breakfast sausage is flavored with a wonderful variety of spices that leaves a bit of a bite in your mouth and seems to be a much higher quality breakfast meat than traditional diner fare.

While good, The Honey Cake French Toast can be a bit much for those without a serious sweet tooth, as it’s exactly what it sounds like. If you guessed that it was cake slices cooked like french toast, and drizzled with honey, you’d be right! I must admit though, we all enjoyed it immensely.

Next up on our unexpected culinary journey, we sampled the new Smaug’s Fire Burger (Pictured above). While it intrigued us with it’s ingredients of Pepper Jack Cheese, Fried Jalapeno Bottle Caps, and a spicy X-Sauce, we are sad to report that this burger was indeed lackluster. Despite what should equal out to be a delicious burger with a kick, we found that we were left with a bland and fairly boring sandwich which does not live up to the title of “Fire Burger”. While there was nothing wrong with the burger itself, there could have been more effort put into the creation to ensure a fiery kick, as both the bottle caps and sauce seemed to be devoid of actual spice.

Continuing forward on epic our food quest, we sampled the returning champion from last years menu… The Hobbit Hole Breakfast! If you’re solely looking to order breakfast like a Hobbit, this is the meal to get! Remember when Mom used to make Eggs in a Basket? You don’t? Well then your childhood sucked more than mine. That doesn’t matter though, as Denny’s has perfected this good old breakfast classic!

You may be wondering… “What’s the twist?” Well, I’ll be happy to tell you! Instead of a plain, old, boring piece of toast, Denny’s fills up two halves of a delightful cheese bun with 2 fried eggs, ready to burst with a delicious golden yolk! They then top that off with bacon & cheese hash browns and MOAR BACON! What’s not to love?

Being the ridiculous fans of Red Velvet Cake that we are, this was another item that Neil and I were very happy to see make a comeback! Radagast’s Red Velvet Pancake Puppies are made with white chocolate chips, sprinkled with powdered sugar and served with a cream cheese icing for dipping. Great for sharing… or not, if that isn’t your thing. Personally, I could eat these all day.

Slightly disappointed by the fact that the Pumpkin Patch Pancakes did not make a comeback this year, I was hoping that the new Sweet Potato Pecan Pancakes would not let me down. In fact, not only were we NOT let down, we were completely blown away! You may need some dental work done after nomming on these babies, but they are a sweet treat to be savored! Each order comes with 2 sweet potato pancakes filled with pecans and drizzled with a warm cinnamon sauce. Unlike the Honey Cake french toast, we found this to be a sweet flavor that is not to be missed! Try them with bacon… you know you want to!

That’s right! Denny’s has hopped on board the pumpkin shake train as they introduce the new Bard’s Pumpkin Pie Milk Shake! Everything about this beverage is right in oh so many ways! They start by blending pumpkin pie and “premium” vanilla ice cream, and top it off with caramel and whipped cream. While this has to be easily 1000 calories, this drunk geek can never say no to something pumpkin flavored. Be sure and order one with your meal! Trust me… you’ll thank me!

Why settle for a standard cup of heated up mop water that Denny’s tries to pass as java, when you can enjoy Bowman’s Brew Pumpkin Coffee? This warm and aromatic cup of joe has just the right amount of pumpkin spice and flavoring to help sober up the drunkest of Hobbits after a long night of merriment. Don’t miss it, as it will only be here for a limited time!

The Hobbit Menu also features a, fairly standard looking, turkey and stuffing dinner. We chose to forgo sampling this plate as we feared oncoming diabetic comas

It may often be viewed as a last resort when it comes to dining, and while some items proved to be less then perfect, we here at The 3 Drunk Geeks enjoyed our Hobbit meal at Denny’s and will be returning for more Middle Earth delights before the promotion ends.

Now to conclude this article, we’re proud present to you…

Be sure and check out The 3 Drunk Geeks on the interbutts! 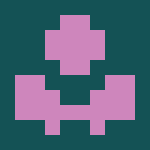 I too yearn for the pumpkin pancakes. While the sweet potato ones are interesting, my favourite is still the pumpkin ones. Still having dreams about them.
Glad they brought back the shire sausage as it is easly my favourite. As to the french toast and pumpkin coffee, I think I’ll pass next time. Maybe the smaug burger needs a bit of hot sauce? Maybe I’ll sneak in my favourite bottle of hot sauce. Will try the pumpkin shake next time as it does sound yummy.