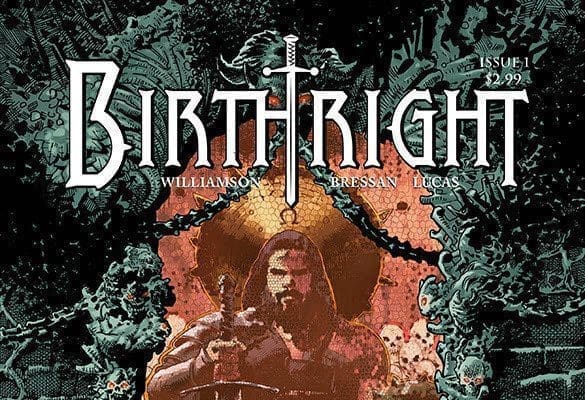 An all-new ongoing fantasy series filled with suspense and mystery

What started as a game of catch in the park between father and son turned into a parent’s worst nightmare. For the Rhodes family, losing their son was the most devastating thing that could’ve ever occurred… but it couldn’t prepare them for what happened when he returned. Skybound’s newest original series will turn fantasy into reality in this oversized debut issue.

Williamson explained BIRTHRIGHT’s origin predates both his current hit horror series: “People have asked me if I get worried about being typecast. But I knew BIRTHRIGHT was coming. Even though it opens with what I think is one of the scariest things imaginable in real life… it’s a fantasy adventure book at heart. And one Skybound and I have been working on for a long time. Before GHOSTED even came out.

“As a fan of adventure and fantasy stories as a kid… it was always great seeing these young kids going on amazing journeys to far way magical lands. The Lion, the Witch and the Wardrobe, Peter Pan, Explorers, The Neverending Story, Wizard of Oz, Flight of the Navigator. But there were never any real consequences to those adventures… What happens when you come home from this great adventure? What do you do next? How do you go back to normal life?

“Those thoughts lead to my obsession with the idea of destiny. If your whole life has been about one moment… one thing that you had to accomplish… what do you do after it is over? How do you go on knowing that the main reason you were born is finished?

“That’s what Birthright is about: what happens after the adventure.” Skybound is the home of Robert Kirkman’s creator-owned work including his Eisner Award-winning comic book series, The Walking Dead, long-running Invincible, all-ages Super Dinosaur, Thief of Thieves, and Clone as well as Ghosted, Witch Doctor and Invincible Universe. Since its inception, Skybound has created television shows, merchandise and a wide spectrum of platforms, games (The Walking Dead: Assault iOS app), and entertainment events (The Walking Dead Escape). Skybound’s successes include the comic behind the hit Emmy®-winning television show, AMC’s The Walking Dead, the highest-rated basic cable drama of all time in the U.S, also an international success in 122 countries and 37 languages. Skybound/Kirkman frequently top the hardcover and paperback bestseller lists. Your destinations for all news and merchandise from Robert Kirkman, The Walking Dead and all Skybound titles are www.Skybound.com and www.TheWalkingDead.com.

Special Variant Covers Celebrating The Return Of The Fantastic Four!