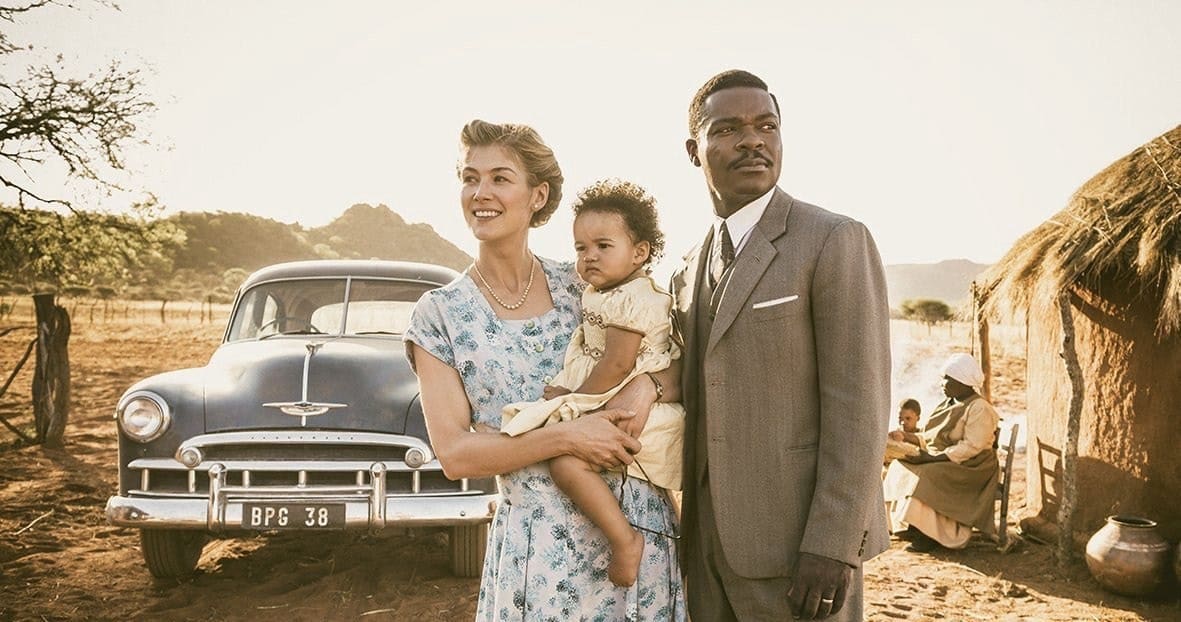 Many Hollywood films that are based on a true story tend to overdramatize the events to make the film more entertaining. Sometimes the writers go a bit too far, but the good films that are based on a true start generally tend to walk the thin line between overdramatized and just enough additional drama to add entertainment value to the original story while still keeping the script grounded in reality. A United Kingdom is a film based on a true story that doesn’t offer much additional dramatization and it actually hurts the film a bit.

Seretse Khama (David Oyelowo) has been studying in London during the late 1940s until he comes of age and returns home to the African country of Botswana to rule of its king. While in London he meets Ruth Williams (Rosemund Pike) and falls in love with the British native. He asks for her hand in marriage and the two return to Khama’s homeland shocking his uncle and current ruler of Botswana, Tshekedi Khama (Vusi Kunene), as well as the British government who had a large stake in Africa at the time.

All of the key players offer stellar performances, including the main force of opposition from England, Alistair Canning (Jack Davenport). Unfortunately, where A United Kingdom falters is in the lack of added drama. While there’s plenty of drama in the actual events that occurred, keeping the newlyweds apart, that doesn’t covey well in the film. Yes, there are dramatic sequences, but it never feels as though there’s any real danger as the film gives the impression everything will work out in the end.

The struggle of all those involved in this incident is clear and present in the film, but it lacks gravitas. There’s no weight behind the events depicted on-screen and that’s primarily due to the script. Churchill is mentioned as a key player during multiple parts of the movie, but he’s never shown. In fact, aside from the small primary cast, we see very little impact of these events around the world or from other significant figures in Africa and England.

Even in films such as Titanic, in which everyone knows how things are going to end, it’s how the film plays out that captures the audience. A United Kingdom doesn’t have that extra pull to reel in an audience. Instead it just feels as though the audience is quietly and patiently watching the events play out toward an eventual happy ending. Without knowing anything of the real-life events, there was never a question as to whether or not things would turn out well for the king, his wife and his country.

A United Kingdom isn’t a bad movie, but it’s not a particularly good movie either. While the acting is fine, there’s nothing to really keep the audience on their toes or even spice things up. It’s a film that many will likely forget shortly after leaving the theater, but that issue could have been resolved with a more compelling script. As it stands, A United Kingdom limps to the end.

About A United Kingdom

Synopsis: Prince Seretse Khama of Botswana causes an international stir when he marries a white woman from London in the late 1940s.