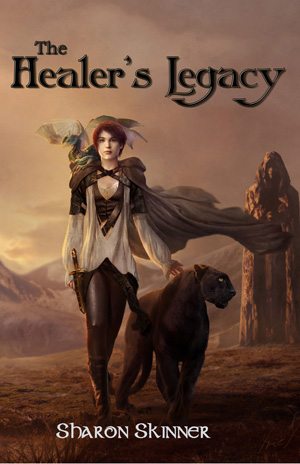 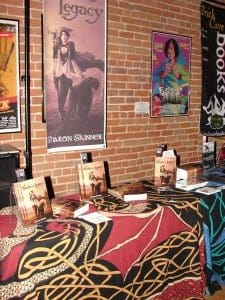 Mesa, AZ – I had the wonderful opportunity to interview author Sharon Skinner last Thursday (03/29/12) at Lo-Fi Coffee in downtown Mesa. Presented by Brick Cave Media, they celebrated the release of her much anticipated book “The Healer’s Legacy”. Sharon was there to autograph copies, read samples and talk about the writing of the book. Enjoy the interview!!

Me: Sharon, tell my readers a little about yourself.

Sharon: About myself? Ah well, I’ve been writing since I can remember and I decided awhile back that the short story form wasn’t for me. I did a lot of poetry. Won some contests, and things like that and I enjoyed that. And I did some slam [poetry slam]. But I found that I had a bigger story to tell, and that it would take a novel to do it in. And so that’s how I ended up writing novels.

Me: Very cool. So what got you to this point right now?

Sharon: Well it’s about perseverance and craft craft craft, you know. Writing is rewriting. It’s a lot of button share time. It’s a lot of revisioning and not just revising but revisioning the story and looking for shaggy spots. But what I do when I write, especially first draft, is I’m kind of a seat of the pants writer. And I actually tend to follow my characters around like a journalist almost. I’m more of a…everything that I do is character base, character driven. That’s not to say there is no plot, there is a plot. I’m more focused on the characters and who they are and how they react in situations and what their story is. I’m also a huge fan of the hero’s journey. But I once read a book that I found a little annoying because it suggested that the male heroes journey was an external journey and the female heroes journey was an internal heroes journey and I beg to differ. I think that the most interesting stories are those where you have both an internal and external journey for your protagonist for your characters.

And I’ve had a long journey myself. I’ve been half way around the world. I was in the United States Navy. I was one of the first women to go on a full six month westpac cruise on a navy vessel. And I was the first female FM Rock Jock on the armed forces airwaves in the Indian Ocean. So I have kind of my own little journey I’ve been on.

Me: No Kidding! Very cool. So it kind of relates in your characters then?

Sharon: I think it does. I think I relate very well to my characters. There’s always an arc. A lot of my books are about relationships and about trust and about learning to accept who we are. Even though we have dichotomous natures, often that doesn’t always jive with who we want to think we are. So my stories often  are about the acceptance of that in ourselves. Learning to own it.

Me: Okay. So your current book, The Healer’s Legacy, now what inspired this story? I read a little synopsis about it and 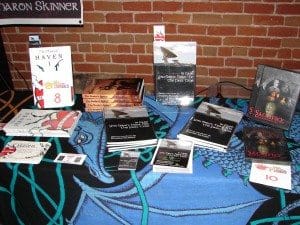 it is very cool. Kind of like a land dwelling Aquaman…

Me: Beastmaster! That’s right! That’s what I thought (laughter)

Sharon: Kira’s journey is one that is really close and dear to me. She is running from an abusive relationship. Arelationship she got involved in at a young age. She kind of got sucked into all  the glory of who this guy was and who he seemed to be and those appearances. And then found out that deeper down there was a darker person living inside him. So, it starts with her trying to escape from that. Along the way she’s helped of course by her mentor who helped raised her after her parents were killed in the war. But she learned at an early age that she had an unusual ability to psychically communicate with animals. But only certain animals not all animals. She is raised as a healer and yet her psychic abilities only extend to animals that are hunters who kill and are carnivores. So for her to accept that dichotomous side of her, that’s not quite so pleasant and not all healer and light and all of that is part of her journey.

Me: very cool. Well I don’t want you to reveal too much you know. I want people to read it too (haha). So what do you having coming up? Is this the first book in a series?

Sharon: This is the first book in it looks like a three book series. I’m working on the plot line and the journey for the second book and I’ve drafted some beginning chapters. But the next book that’s actually gonna be released for me is a book that I’ve already written and it’s a middle grade novel. It’s for younger readers and it’s called The Nelig Stones.

Me: And what’s that about?

Sharon: That’s about two young people who are dealing with their own problems at home who magically get transferred to a land where dragons are kings. Where they have to find five magic talismans in order to open the gates of the world in order to get back home. And it’s about their journey and about their learning to work together and collaborate in order to make this happen.

Me: Great! So where can people find your work, besides tonight?

Sharon: Well, I’m available on Barnes & Noble and Amazon. Brick Cave Media is the publisher so the Brick Cave Media site. You can find me on my website sharonskinner.com or also the book site healerslegacy.com. I have in addition to this book a collection of essays, short stories and poetry that’s available called “In Case You Didnt Hear Me The First Time”. 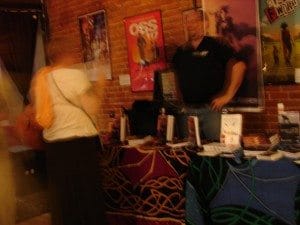 Sharon: Thanks! That’s also out on Amazon and all of those places. You just Google me, I’ll pop up and you’ll find me.

Me: Now besides this event tonight, where can people expect you next? Maybe at another convention?

Sharon: LepreCon is my next stop.

Sharon: So we’ll be at LepreCon and then I know after that we’ll be at Comicon (Phoenix). So those two things are coming up pretty quickly. I think LepreCon is what another week and a half away…?

Me: April 6th-8th so yeah about a week and a half.

Sharon: So that’s coming up very quickly. And then Comicon of course at the end of May. So we have those things slated. I don’t know if I have any other readings coming up. I don’t do the scheduling, I leave that to Bob. So they can contact Bob Nelson at Brick Cave Media.

Me: Awesome! Well I thank you very much for your time Sharon. Very nice to meet you!

Sharon: You’re welcome! Thanks for coming out!

See Sharon at LepreCon 38. Check out the programming for the convention here: