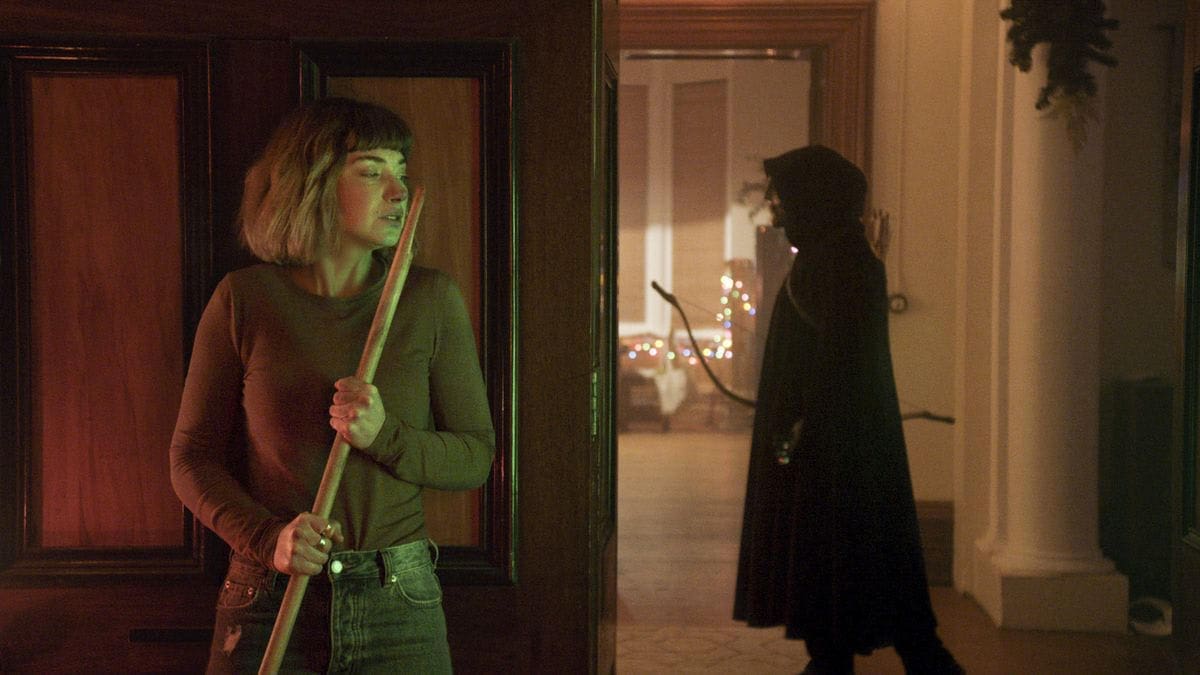 Not Really Dreaming of This Black Christmas

Every year or so, a studio releases a Christmas movie that doesn’t follow the same holly jolly, love is in the air, caring is sharing template that most Christmas movies do. The quality of these movies ranges from transcendent, like The Nightmare Before Christmas and Gremlins, to pretty good, like Better Watch Out and Krampus, to nearly unwatchable, like Santa’s Slay and Santa with Muscles.

Black Christmas, a redesign of a 1974 movie with the same name, falls closer to Santa with Muscles group than it does to better fare.

Black Christmas stars Imogen Poots as Riley, a character so one dimensional that they don’t even bother to give her a last name. We learn what little we do about Riley in bits and pieces. Her parents are dead (we’re meant to infer this from the fact that she’s not going home for Christmas and from a brief conversation about an “Orphans’ Dinner”), she was attacked by a frat bro three years ago, and apparently that attack made her less of a fighter…whatever that means. Riley is joined by a typical cast of sorority sisters: Helena, the flighty but loveable dum dum; Kris, the social justice warrior, and…well, that’s actually all I can remember. There are a couple of other sorority sisters that exist simply to be fodder, but that’s about it. The characters are so forgettable they have signs on their doors and wear charms with their names so we can actually remember them.

On the flip side, we also have equally forgettable frat bros who, oddly enough, actually get last names. These evil frat bros are led by Brian Huntley (Ryan McIntyre), who was the one who allegedly attacked Riley, and Phil McIllaney (Ben Black), who seems to be Brian’s right hand man…and was most likely cast in this movie because he has the douche bag look down pat. Joining the “Evil Men” cadre is Professor Gelson (Cary Elwes) who has the audacity to focus on straight, white, European males in his literature class…even though one of the first scenes in the movie shows him doing exactly the opposite. However, he has a British accent, so it’s sort of like a built-in spoiler.

Anyway, the gist of the movie is that someone’s killing sorority sisters, supposedly in retaliation for Riley and three of her sisters singing an accusatory song about Brian and the frat boys at a co-ed party. Kris, the social justice warrior, thinks it’ll be a good idea to post the video online, which further humiliates the frat bros.

That’s one of the problems I had with the story. The problem with equating the killings to the humiliating video is that one sorority sister (who, oddly enough, isn’t even in the same sorority as Riley) is killed in the first five minutes of the movie.  She’s sort of forgotten until she mentioned with a couple other sisters that have gone missing. We come to find out that the first woman that’s killed isn’t even in Riley’s sorority, which is just odd. The movie just seems disjointed that way.

In addition to the paper-thin characters and logic gaps in the plot, the 92-minute movie moved so slowly. People stare at stuff for minutes at a time and people take five minutes to walk down a hallway and open a door. Sure, I realize that we’re trying to build tension, but the payoff isn’t there most of the time. Hell, in one scene, Riley’s roommate seems to take an eternity to find her cat. The movie isn’t particularly scary, and the PG-13 rating means there isn’t going to be a gory kill at the end of the slow buildup.  The only thing that saves the story is the corner it turns in the last 20 minutes, where the movie puts a twist on the typical slasher storyline. Unfortunately, they introduce the twist too late and really don’t flesh it out too well.  If they had fleshed out the twist sooner, it would have made the movie a lot more interesting.

The last thing that has to be mentioned is that this movie will most likely spark some debate. I’m guessing people will have one of four opinions of the movie: they’ll love the fact that women are represented as victims who are fighting back; they’ll hate the fact that men are painted with a broad brush to look like scumbags; they’ll realize that there are good and bad women and good and bad men and this movie is exaggerating to prove a point; they won’t care because it’s just a movie and they’re going to be entertained. However, even if this movie is meant to show empowered women fighting men that are largely condescending, impotent, and/or scumbags, it really doesn’t even do that well. 90 percent of the movie shows the women simpering, cowering, starring, and doing stupid stuff that every horror movie female character has done for the last 40 years. When the going gets tough, the women typically yell at each other, blame men, or cower in fear. I was kinda’ hoping to see some ass-kicking chicks getting systematic revenge on the frat bros that did them wrong.  I don’t want to spoil this movie, but the real storyline is far less thrilling.

It might seem from this synopsis and review that I didn’t like Black Christmas. That is true, but I didn’t hate it, either. It was a perfectly acceptable movie…it was just really disappointing because the twist really could’ve made the movie better if it was woven into the script more. I also could’ve done with bolder, fleshed out characters that I wanted to see win. A short run time, paper-thin characters that don’t transcend horror movie cliches, scenes that moved at the pace of erosion, and a PG-13 rating ensured that this movie was never going to be a horror/slasher classic…or even better than average.

So, in conclusion, if you want to see a movie with an ass-kicking heroine that has a cool twist, check out Better Watch Out instead. Consider this recommendation my Christmas present to you. Your time around the holidays is precious; use that time to see a better movie than Black Christmas…or do almost anything else.

Synopsis:  Some one-dimensional sorority sisters, led by Riley, are accosted by some equally one-dimensional frat bros, let by Brian Huntley. A clichéd horror/slasher movie with an underutilized twist ensues.