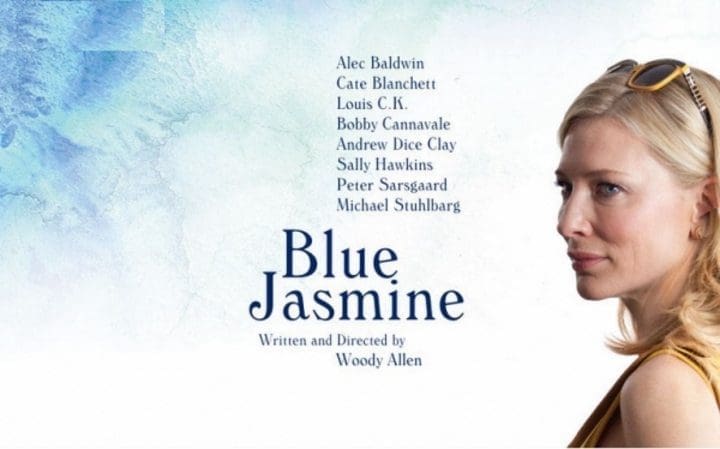 If Cate Blanchett does not win an Oscar for her portrayal of a New York socialite on the verge of a nervous breakdown, I will eat my own hat (not really – I like my hat).  Woody Allen’s latest film, Blue Jasmine, is a stunning look at one woman’s dizzying and chaotic dissent into normalcy and the falsehoods that we all hide behind, both rich and poor, to find relative happiness.

Blanchett plays Jasmine, a woman who married into wealth in the form of her husband Hal, played by Alec Baldwin.  As is the stereotype of most wealthy men, Hal cheats and lies his way up the money ladder.  Eventually, the law catches up with him and suddenly Jasmine loses her lavish lifestyle of which she’s grown quite accustomed.  Her last resort is to move in with her sister Ginger, a woman barely scraping by, whose mediocre boyfriend’s existence offends Jasmine to her very core.  The story then compares and contrasts the obscenities of the rich and poor life, the attitudes of thus, and illustrates that both suffer from the same core feelings and relationship mishaps.

The best part about this film is watching Blanchett’s performance.  She balances sophistication and civility with that of a crazy-eyed schizophrenic.  It’s an explosion ready to happen.  It’s a car wreck to be gawked at.  It’s almost feeling sorry for a woman who is cruel, petty, and downright mean, who is always ready to offer advice but will never take it.  It’s a beautiful range of acting that is complimented by a wonderful supporting cast, including Sally Hawkins as Ginger.

Hawkins’s character is the antithesis to Blanchett’s.  They are yin and yang. Ginger has food on the table, a roof over her head, and a man she loves.  Sure, she struggles, but family, as she figures out, is most important.  That is, except, for all the times Jasmine shows up and pushes her toward something different, only succeeding in turning Ginger’s life upside down.  Andrew Dice Clay and Louis C.K. make appearances as various love interests for Ginger. Both men of comedic background, showcase their serious sides, perhaps metaphorically representing the “jokes” of Ginger’s life, as her current beau Chili (played by Bobby Cannavale,) is neither a real-life comedian nor a scumbag, per se.

The story is a beautiful breakdown, with a refreshing and realistic dialogue.  Woody Allen is no stranger to this, and the story is one of his better pieces from recent years.  With Blue Jasmine, there are many moments where characters interrupt each other or begin a thought, stop, then start again.  It better enforces the idea that this story is representing real people in real time.  Plus, there is elegant story arrangement and editing work that visually unravel the labyrinth of lies hidden within Jasmine’s backstory.

In the same way Daniel Day-Lewis is to There Will Be Blood, Cate Blanchett is to Blue Jasmine. On that alone the film is worth a watch to experience the talented actress’s prowess. Beyond that, the story is a typical, yet engaging tale, given a fresh spin by a well-proven, veteran director. Without sounding all film-school-snobby, this piece is a great study in how acting and direction can be art. Synopsis: A life crisis causes a woman to head to San Francisco, where she reconnects with her sister.