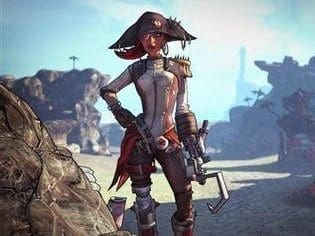 Gearbox confirmed today to the Associated Press the release of its first add-on content  “Captain Scarlett and Her Pirate’s Booty”. We can expect the downloadable content to hit on October 16th. Players can expect the add-on to focus on Captain Scarlett and will be set in an expansive desert which will include a bandit ridden town called Oasis. The add-on will include new enemies, raid bosses, new currency, and a floating desert terrain vehicle. It will be priced at 9.99 (800 Microsoft Points) or free to those who already purchased the 29.99 season pass.