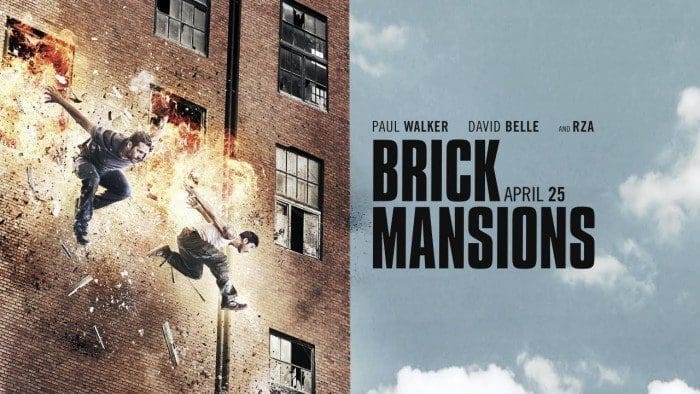 The difficult task of performing in an action movie is making the audience root for you and believing in your cause.  Sometimes that is made easier if a loved one is in danger, or a city; in this case both are utilized. Unfortunately a mediocre script can derail any actor’s best efforts.

In the film Brick Mansions, we are shown a run down district, in the near future, surrounded by high walls just outside of Detroit, where society is left to their devices.  The military patrols the perimeter and the gangs rule within. One such gang is run by Tremaine (RZA); he hopes to supply this little city with a fresh supply of drugs. They are met with resistance by Lino, played by David Belle (District 13 – Ultimatum), who hopes to keep his neighborhood clean.  A Detroit undercover cop named Damien (Paul Walker) is also after Tremaine for more personal reasons and hopes to infiltrate Brick Mansions by any means.  Meanwhile the mayor of Detroit makes a deal to clean out this area and make way for a lucrative development.

The film contains some good action scenes which are elevated by parkour-style escapes and attacks courtesy of David Belle, who happens to be the father of parkour.  The film seems to be almost an extension of his District 13 movies.  Paul Walker also contributes to these scenes with mixed results. There are the familiar car chases and guns being pointed at everybody in a threatening manner.

The story as a whole is more than a little silly and that may be in part to Luc Besson’s contribution to the script.  He recently worked on 3 Days to Kill and the humor is pretty much the same.  At some point the humor is misplaced and we end up struggling to take the movie or the characters seriously.  The addition of a bomb that threatens the entire city doesn’t help matters.  Nobody seems all that worried about it and really it only serves to move the characters from one building to another.

The film in the end makes the audience question who the bad guys really are, but at that point you won’t really care.  You do care about Paul Walker and David Belle’s characters initially, and as a pair they are fun to watch, but I was hoping the bomb would just go off so we could move on to another storyline.  It’s a 90 minute violent cartoon with a predictable ending, but if you can overcome the ludicrous share of one-liners and plot holes then it will entertain you.

I should make one final comment on one of the several actors this movie is grateful to have.  Paul Walker made a name for himself in the Fast and Furious films and I greatly admire his energy and commitment to his roles. Since this is one of his final performances, it is worth noting his efforts throughout his career.  You can’t watch this film without keeping that in mind.  He will be missed.

Synopsis: An undercover Detroit cop navigates a dangerous neighborhood that’s surrounded by a containment wall with the help of an ex-con in order to bring down a crime lord and his plot to devastate the entire city.