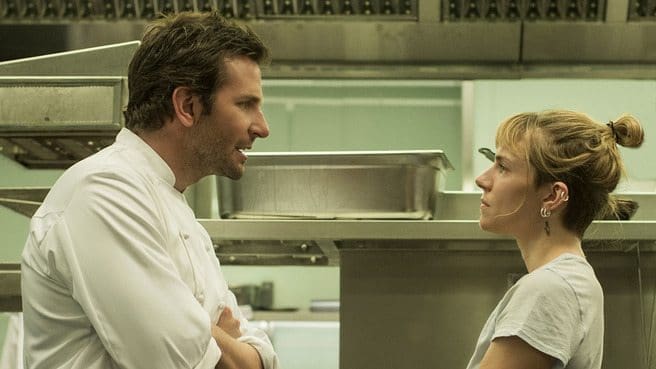 There’s something appealing about redemption films. Those films where a former hot-shot in whatever situation has fallen to the bottom before a narrative impetus forces him or herself to reevaluate their lives. The story of Adam Jones (Bradley Cooper), a world renowned Parisian chef, his self-imposed fall from grace, and his return to the top of his game could’ve simply fallen into this tired trope, but John Wells (best known for The Company Men and “West Wing”) directed a smart, tight film that was surprisingly well made. Jones was at the top of his game in Paris and had earned two Michelin stars (over a century old, a Michelin rating can make or break a restaurant), but he became a pompous, drug abuser and abruptly dropped from public eye. After a hiatus from the world of European cuisine, Jones reemerges as the film opens from a self-imposed exile shucking a million oysters in Louisiana. He quickly reassembles the old gang –this time in London– and scouts out the likes of Helene (Sienna Miller), a sous chef who doesn’t know her potential.

With his team in place and the backing of his former Matire d’, Jones opens a new restaurant with his eye on the prize: the coveted three star (the highest) Michelin Guide rating. Jones makes several missteps on his climb back to the top, but in the end he learns the most important life lessons.

Cooper plays Adams Jones as a relatively introspected former addict who struggles between his own selfish control tendencies and those with whom he surrounds himself. He continually pushes those people away while manipulatively pulling them towards him. At first, this behavior really bothered me in the film mostly through the first scene in the new kitchen with his staff surrounding him (you’ll know it when you see the film), but by the film’s end that scene was clearly instrumental to demonstrate growth and subsequent destruction of Jones’ demons.

In a lesser film, the bad boy’s pursuit of the girl would end up with the two of them romping in the sack, but Wells develops the relationship between Adam and Helene well with the assistance of Helene’s young daughter, Lily (Lexi Benbow-Hart), in her first role. Benbow-Hart holds her own against Cooper’s Jones in one of the more endearing scenes in the film, and while the romantic connections does emerge between the two leads when it does it doesn’t feel forced or expected.

While Jones kitchen has a strong cast of supporting players, I was excited to see how Wells was going to use Uma Thurman and Emma Thompson, a food critic and Jones’ therapist, respectively. Well, neither were used well at all. Thurman’s scene was a blink and you miss it, and even though Thompson appears sporadically throughout the film, she was underused and a less eractress could’ve effectively performed this role.

Burnt, a Weinstein Company film, is a mature movie that attempts to showcase Cooper’s range as an auteur. Go see this film if you don’t mind his Gordon Ramseyesque tirades, but don’t go hungry. The food plating aesthetics are gorgeous. As is the idea of the artistry of food described by Cooper here: “I don’t want my restaurant to be a place where people sit and eat. I want people to sit at that table and be sick with longing.” While the film may not necessarily make you sick with longing to see a second time, it is a solid film.

Synopsis: Adam Jones (Bradley Cooper) is a former Parisian chef whose drug use causes him to fall from grace. After a self-imposed exile in Louisana, he returns to the European cuisine scene to quest after the near-mythic third Michelin star.

Rated: R (for language throughout)