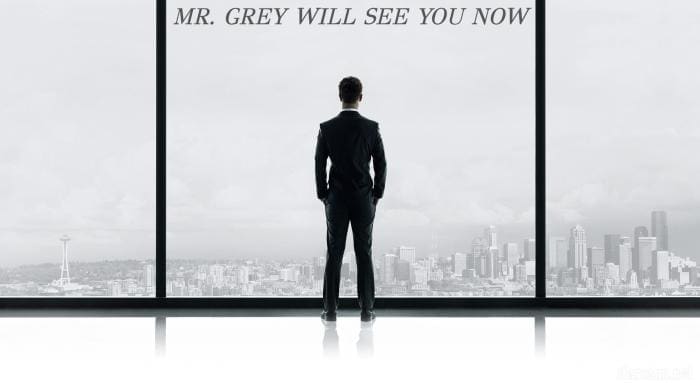 During yesterday’s Universal Pictures presentation, the studio offered a quick look at many of its 2015 films. Of the titles shown, Fifty Shades of Grey, Fast & Furious 7, and The Minions featured the longest trailers. We provided a quick look at all three titles yesterday, now let’s take a close look for the diehard fans of each franchise.

First and foremost, the target audience for the movie should be happy to know that Christian Grey is exactly how most would picture him. A dashing young business man who likely gets any woman he wants. After watching the footage, it’s hard to imagine many women not swooning over Grey, especially as he courts Steele during the early portion of the footage.

While most would say that Dakota Johnson is beautiful, she isn’t some Photoshopped sex magnet who wears skin-tight clothing that leaves little to the imagination. It’s very clear that Johnson could be the average woman, especially when compared to someone like Scarlett Johansson who generally demands a sexual presence any time she’s on-screen. So not only does Johnson play the “average woman” card, she allows the audience to believe they could take her place, being swept off her feet by the dashing Christian Grey.

Of course any good woman has at least one or two friends who will be cautious of any new relationship, and the preview footage clearly showed Anastasia discussing the matter with her friends. They all warned her that successful business men as dashing as Christian Grey always get what they want. They instructed her to be careful and not get too caught up in the budding relationship.

From here, it quickly shifts to far more sexually intense scenes. Anastasia claims she doesn’t know if she can offer Grey what he wants sexually, then at a dinner table, Grey’s hand slides onto her leg and swiftly moves up her skirt. It was steamy. It was hot. It was intense. It’s going to get foggy in any theater that features the movie, especially opening weekend.

The bulk of the Fast 7 footage was a scene in a cargo plane. The whole crew is there, sitting in their cars, inside the plane. They’re talking to each other while Roman Pearce (Tyrese Gibson) feels anxious about what’s coming next. As the cargo bay doors open, it becomes clear that the plan is to skydive out of the plane… while still in their vehicles. Brian O’Conner (Paul Walker), Dominic Toretto (Vin Diesel), Letty Ortiz (Michelle Rodriguez), and Tej Parker (Ludacris) are all there.

As the crew flies out of the plane one by one, we see their parachutes deploy, then they release the chutes as the ground hovers blow and drop hard and fast. They must have some pretty powerful shocks because they race off as if nothing happened. But then we flash back to the plane where Roman is apologizing for not being able to go along for the ride. He’s the sole person left in his vehicle inside the plane. Unfortunately for him, Tej had other plans, as he already rigged Roman’s vehicle with an auto-deployment mechanism. Tej screams and complains as his vehicle is dragged out of the plane, flips upside down in the air and plummets toward the ground.

It may sound cliché, but the action was fast and furious and raised the bar to a level most wouldn’t think possible after so many other films in the franchise. It’s not until you see Ian Shaw (Jason Statham) in action that it really hits you that this movie, the final movie in the saga, could quite possibly be the best.

When it was first announced that the next movie in the Despicable Me series would focus almost exclusively on the Minions, there was some concern about how that kind of movie would play out. The Minions are certainly the biggest draw of the series, and they’ve had their own shorts to go along with the main feature, but this would be their first full-length feature film. Could the Minions carry a movie without the likes of Steve Carell’s Gru as the main character?

If the footage previewed yesterday is any indication, they most certainly can. The footage started with a look at the Minions through time. They would move to the most evil master around, which meant going from small fish to big fish, to bigger fish, then onto land, and eventually to a T-Rex. It then escalated to the likes of Dracula, where the Minions tried to surprise the Lord of Shadows by opening the blinds. Unfortunately, this exposes him to the sunlight, which ends up turning their master into dust.

It’s clear that the Minions aren’t exactly the best henchmen, but at least they try. Soon they find themselves without a master and seemingly lost. It’s then that Stuart, the star of the Minions movie, steps up and vows to find the Minions the best evil master they’ve ever had. He’s joined by Bob and Kevin (who don’t really want anything to do with the journey, but get dragged along anyway), and they set off.

The scene quickly shifts to what appears to be modern America, where the Minions find a man dressed in a T-Rex costume. As one of the Minions pulls at their old master’s tail, it comes off. The Minion is shocked, as another pulls off the lower body, and the last Minion pulls off the head, revealing the skinny man inside. The look on each Minion’s face is as cute as you’d expect, and it’s easy to see how they can carry a movie, seeking out the ultimate evil master.