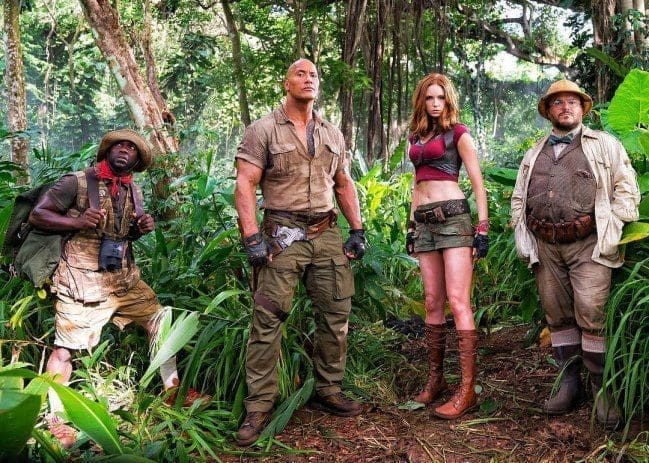 Sony’s CinemaCon 2017 presentation came to a close with the first footage of Jumanji and a new subtitle for the film. Jumanji: Welcome to the Jungle was introduced by Dwayne Johnson, Nick Jonas, Jack Black and Karen Gillan, with Jack Black and Dwayne Johnson entertaining the CinemaCon audience with their standard array of funny antics. Johnson promised that the new film would expand the world of Jumanji while paying homage to the original.

The footage kicked off with four high school students getting scolded by their principle and forced to clean out the basement of the school. While the four are rummaging through the mess they come across an old video game system that happens to play Jumanji. That’s right, the board game was nowhere to be found. Once the four selected their characters, they were teleported into the game where they took on the embodiment of the characters.

Right off the bat the humor of Jumanji was clear. The attractive, preppy, stuck up girl was turned into Jack Black’s Professor Shelly Oberon, the nerdy kid ended up as Johnson’s Dr. Smolder Bravestone, the jock shrunk into Kevin Hart’s Moose Finbar, and the quiet and seemingly shy girl turned into Karen Gillan’s Ruby Roundhouse.

As the trailer progressed we learn that the group needs to return a gem to a special statue somewhere in the world of Jumaji. However, if anyone in the group dies three times, they won’t be able to make it back, adding a level of danger to the proceedings. Animals weren’t shown in the trailer nearly as much as one might expect from a Jumanji movie, but the craziness of the first film was definitely intact.

While Jumanji: Welcome to the Jungle looks to be a fun and wild ride through the jungle, it doesn’t feel like Jumanji yet. There are certainly aspects of the film we’re unaware of, but just going by the first footage, it felt like a great film that has very little to do with Jumaji. It may not feel like it belongs in the same universe as the first film, but at least it isn’t a remake. This is a completely new Jumanji adventures that stands apart from the original Robin Williams film. We’ll have to see how Jumanji turns out when it hits theaters on December 27, 2017.