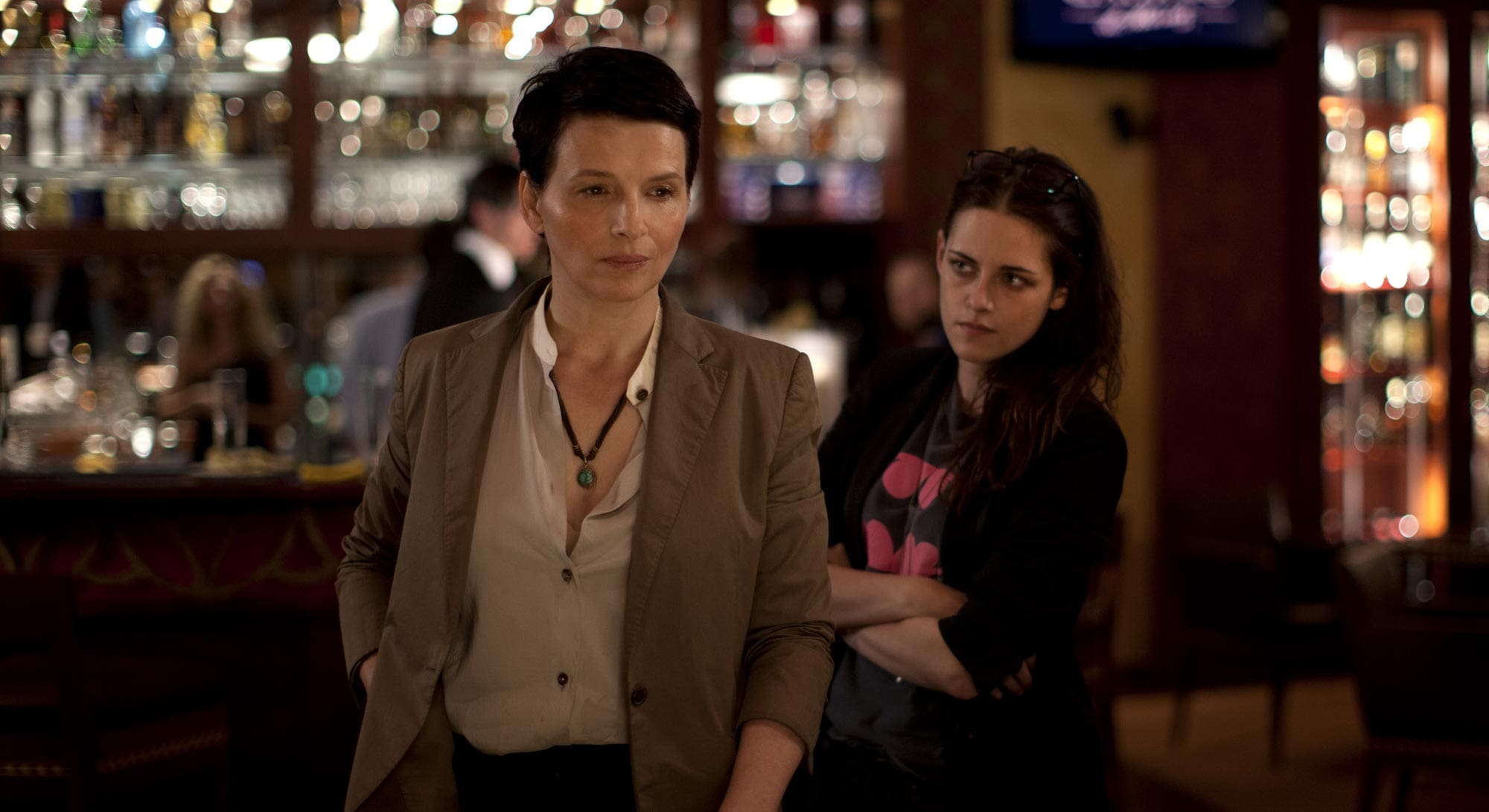 When someone feels the prime moments in their life have come and gone, how does that person choose to approach the rest of their life? One might choose to emphasize what strengths they’ve already acquired and apply them to new challenges.  You might be able to live off past success, but that can get tedious for some.  It especially isn’t so easy for actors who find themselves imprisoned by their earlier success.

In Clouds of Sils Maria, an actress named Maria Enders(Juliette Binoche) is on a train headed to Sils Maria, Switzerland to accept an award on behalf of Wilhelm Melchior, a director and playwright with whom she has worked with for several decades.  Her assistant Valentine (Kristen Stewart) takes care of Maria’s schedule and invitations to do various photo shoots or product endorsements.  Val receives a call that Wilhelm had passed away and the tribute would now be a memorial.  Maria is distraught at first, but still decides to attend the ceremony.  Once in Sils Maria, she stays at Wilhelm’s home and comforts herself in her surroundings.  A village embraced by mountains, forests, and green hills.  While in town Maria goes to a dinner for those associated with Wilhelm.  She meets a director who is reviving an old play of Wilhelm’s, Maloja Snake.  The same play that started Maria’s career at eighteen.  The story centers on a young, manipulative woman named Sigrid who engages in a relationship with her employer, an older woman named Helena who commits suicide when things turn south.  The director wants Maria to play Helena now given her current age and have her lover be an up-and-coming actress named Jo-Ann Ellis (Chloe Grace Moretz).  Maria is very reluctant to jump back into a production that took her to dangerous places mentally and found it even more difficult to find her voice inside Helena.  She eventually relents and, with Valentine’s help, begins to rehearse the scenes as realistically as possible.

Much of the movie is art imitating life.  Maria doesn’t see herself as Helena in any way, but in fact at this point in her career she can’t help but see the correlation.  She studies Jo-Ann’s life online and what she finds doesn’t make her feel any better.  An apathetic, violent party girl who lucks into starring roles.  When Maria finally meets her in person, the conversation couldn’t be more pleasant, but how genuine are first impressions.  Val tries to become the voice of reason that bridges the gap between Maria’s opinion of Hollywood blockbusters and the nuances that great actors try inject into them.  It’s a hard sell and one Maria struggles with throughout the film.  Val sees great talent in Jo-Ann, despite her personal issues.

I rather enjoyed the landscape that Sils Maria provides.  The title of the movie refers to a cloud phenomenon known as the Maloja snake, an event where the clouds seem to travel very close to the ground and move in such a way that resembles a snake.  The play of the same name possibly refers to something or someone that appears suddenly, but vanishes just as quickly and leaves behind only an eerie, beautiful memory.

My favorite scenes in the movie are when Maria and Val act out Maloja Snake together in Wilhelm’s home.  You begin to see little things about both of them in their interpretation of the characters.  They enjoy drinks and cigarettes together and the moments work well.  Val does a great job of keeping Maria on track when her insecurities sneak up.  At the same time Val feels a disconnect that she is unable to resolve when it comes to Maria’s preconceptions about Hollywood acting and genre films.  The scenes with Chloe Grace Moretz are also fun because by this point you wonder if she can keep it together long enough to get on stage.  Unlike her online persona, she appears composed and professional.  It doesn’t take long for her character Sigrid to rub off on her.  She’s young, ambitious, and arrogant, but even Maria can’t recall if her younger self was any better.  Maria might feel like the vulnerable Helena, but maturity and hindsight have their benefits.

Clouds of Sils Maria is a well-constructed film that addresses aging and how we see ourselves as the world gets younger every year.  Juliette Binoche portrayed this concept exquisitely, complimented by Kristen Stewart.  Their acting is superb and the same goes for Chloe Grace Moretz and the rest of the cast.  From the moment Maria reads her first lines, you can’t wait to see how the play ends and how Maria sees Helena after all these years.

About Clouds of Sils Maria

Synopsis: A veteran actress comes face-to-face with an uncomfortable reflection of herself when she agrees to take part in a revival of the play that launched her career 20 years earlier.