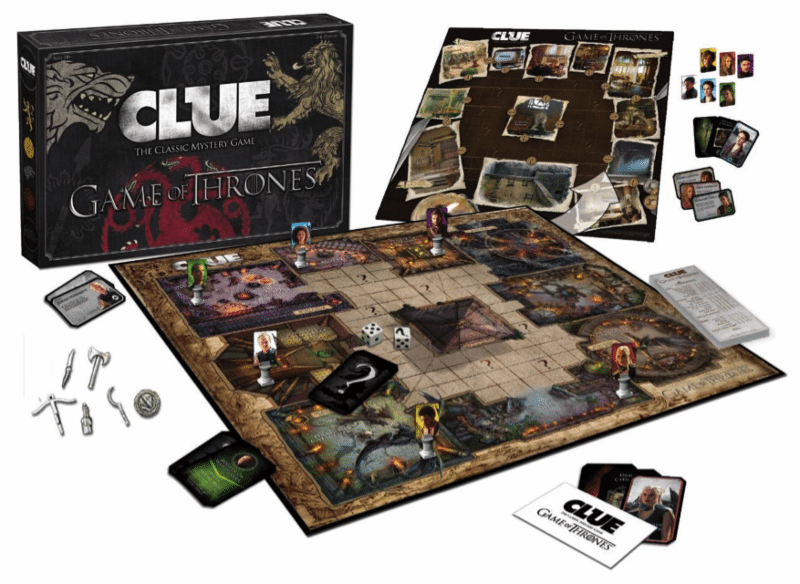 Solve Two Treacherous Mysteries in Game of Thrones Clue
Game manufacturer USAopoly and HBO Global Licensing are thrilled to announce Clue: Game of Thrones is now available in stores across the United States & Canada. Developed by USAopoly and under license from Hasbro, Clue: Game of Thrones brings the mystery of a murderous power play to the tabletop.  Now fans can travel to the Red Keep or Meereen to discover WHO was responsible for plotting the murder, WHAT weapon was used, and WHERE the crime took place. Featuring striking game packaging, a double-sided game board, two different mysteries to solve, and more, this twist on America’s favorite mystery game will entrench fans in a world of intrigue and betrayal. Six Treacherous Weapons: Capture the perpetrator of the crime by discovering which one of the six collectible metal weapons was used for the murder. Was poison given to the unassuming victim or did he fall prey to the deadly arakh?
A Custom Illustrated Double-Sided Game Board:  Choose your mystery as you decide whether to explore the confines of the Red Keep or the streets of Meereen on a custom illustrated, double-sided game board featuring designs based on concept art from actual settings in the show. Did the murder take place in the Red Keep’s Small Council Chamber? Or was the victim laid to rest in Meereen’s Fighting Pit of Daznak?
12 Treasonous Suspects: Uncover who was behind the murder from one of 12 scheming Game of Thrones suspects. Six characters reside in the Red Keep and six in Meereen.
Clue: Game of Thrones Also Includes:
Twenty-one Intrigue Cards (including 13 Master of Whisperers and 8 White Walkers) / 6 Custom Movers/ Custom Scoring Pad / Instructions
Clue: Game of Thrones is available for order at the HBO Shop (store.HBO.com) and at specialty retailers in the United States and Canada.
MSRP $49.95 | Ages 18+ | 2-6 Players
0 0 vote
Article Rating