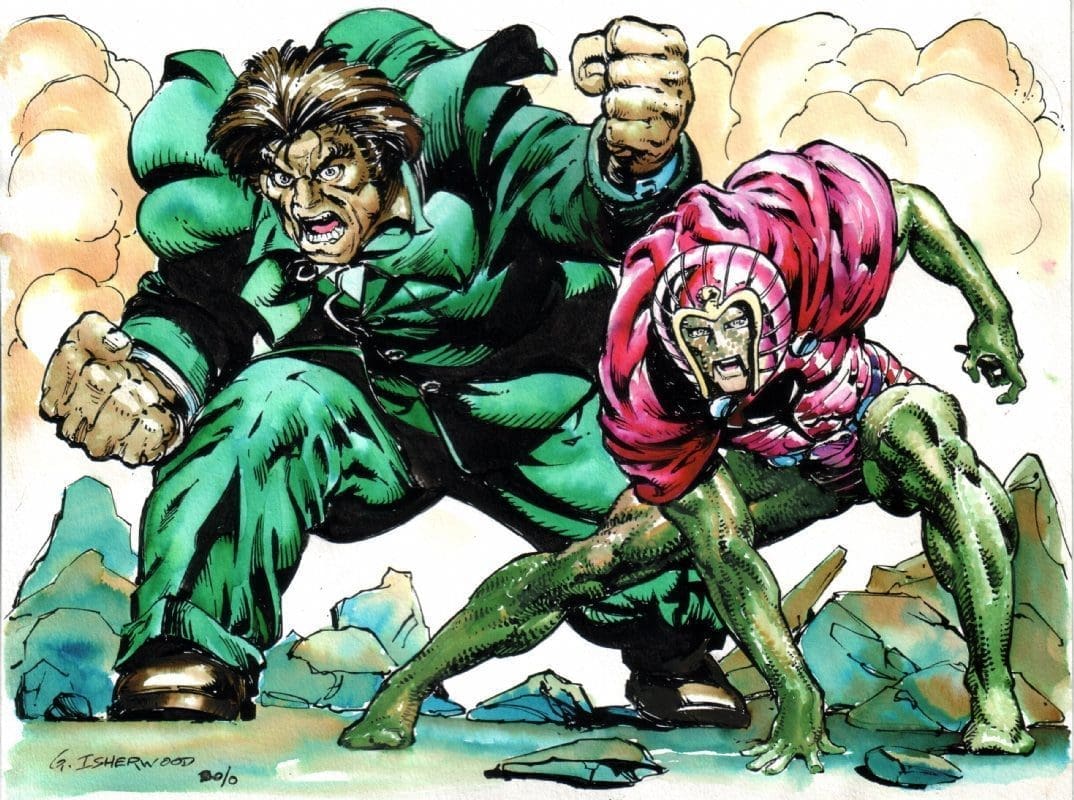 The strange tag team of COBRA and MR HYDE was first introduced in Journey Into Mystery# 105.  They did not seem to fit together, which made them an interesting combo. They battled the almighty powerful Thor, and seemed to not be on Thor’s level or for that matter. The battle was short lived and they eventually moved on to becoming  two of Daredevil’s great adversaries.  Cobra and Mr Hyde had a volatile partnership sometimes getting along and sometimes creating chaos, separately and together, causing their own demise. Other times they put the hero in great jeopardy leaving the reader wondering if it was the hero’s final moments.

Cobra has made several appearances by himself, and Klaus Voorhees is the main version of the Cobra. He split from Hyde and joined the Sidewinders Serpent Society. Cobra’s powers are that of a contortionist able to bend his body and snap back into place, getting his victims to stop breathing. He can stick and cling to walls like an evil Spiderman.

Mr. Hyde on the other hand is based on the alter ego of Dr. Jekyll. This time his name is Dr. Calvin Zabo. Mr .Hyde’s alter ego is a research scientist who has a PHD in medicine. Hyde has been described as a brute with Super strength and Super aggression, and he needs his formula to transform.

It should be noted that both made appearances in back to back Spiderman issues. Cobra made his first appearance in #231, and Hyde followed in a solo appearance in #232. Hyde also  appears in Marvel Zombies and has faced the Incredible Hulk for a short run.

Another interesting story-line where the two Supervillains were involved is the Commission on Superhero Activities. In an interesting twist, all the superheroes must comply with the Superhuman Registration Ac, and it is puzzling to figure out the real motives behind their willingness to comply. It appears they are taking advantage of the split in the super hero community, caused by the Impending Act.

Mr. Hyde and Cobra are examples of supervillains that reappear throughout history. They are familiar to many Baby Boomers, Generation X’ers and Millennials alike. They are constantly reexamined and reinvented to fit the chaotic times we live in.

The superheroes know both of their track records and understand the danger they face if they are underestimated. And if the superheroes aren’t paying close enough attention, Hyde and Cobra will find another way to make a deadly impact.