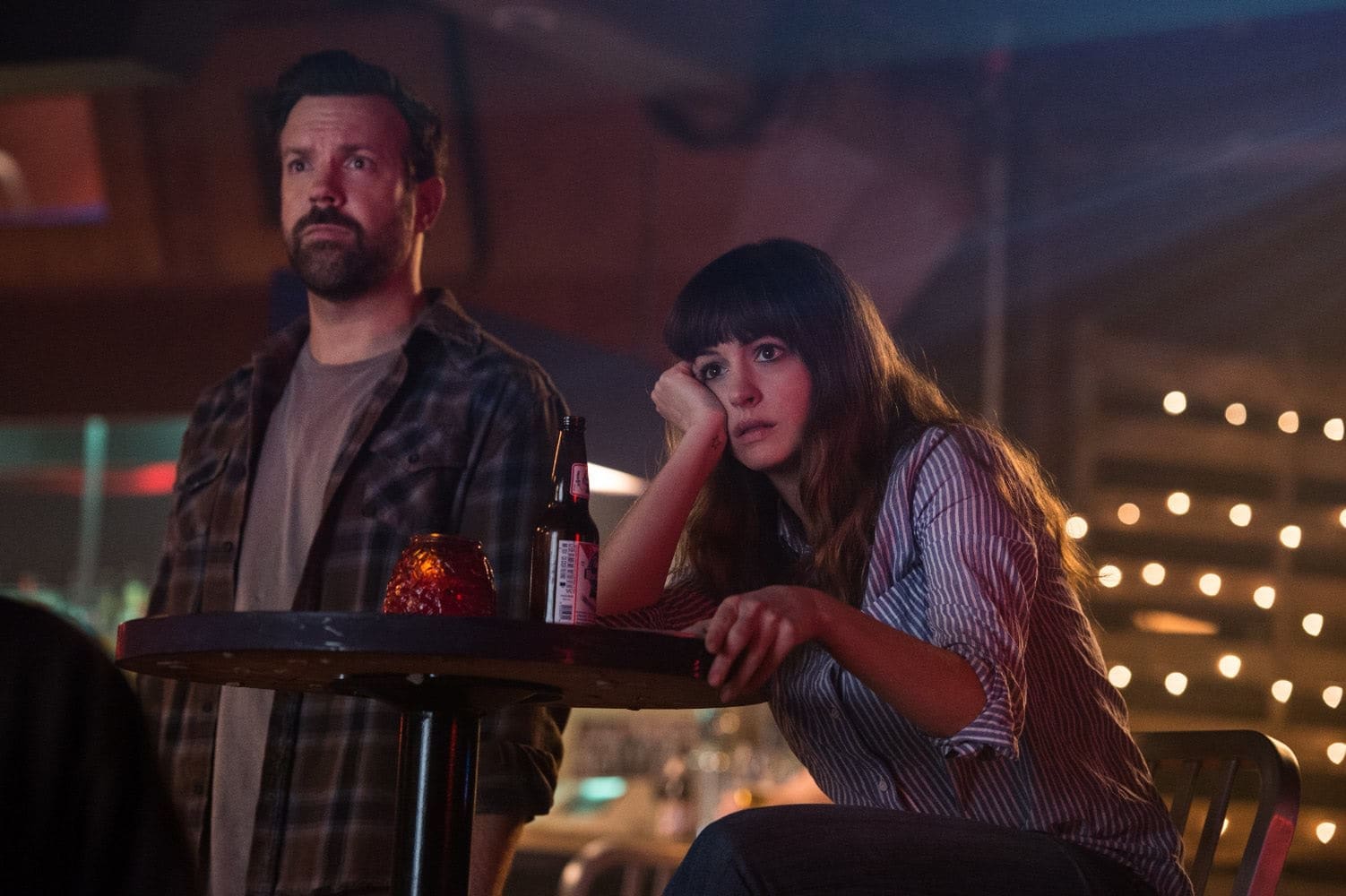 The world is full of pain and heartache.  The choices we make to process these emotions and situations could be our downfall or our survival.  If we find the right answers to overcome our dilemma, we may end up being an inspiration for others who share a similar fate, as well as ourselves.  If we wallow in self-pity and despair, we could bring others down with us, as miserable people often do, and never be whole again.  Most of us can relate to this crisis scenario, and have testimonies of triumph to go with them, but I doubt anyone has had to contend with a giant monster at the same time.

In Colossal, written and directed by Nacho Vigalondo, Gloria (Anne Hathaway) is a consummate party girl.  She enjoys a drink anytime of the day and hangs with a crowd that feels likewise.  When Gloria is not so suddenly dumped by her boyfriend (Dan Stevens), she escapes back to her hometown and runs into an old childhood friend named Oscar (Jason Sudeikis).  Oscar owns a bar in town and decides to hire Gloria while she gets back on her feet.  As Gloria attempts unsuccessfully to avoid alcohol, she also must deal with her self-esteem and codependency issues.  Meanwhile, across the globe, a giant monster has emerged and is terrorizing South Korea.  The monster seems to only appear at certain times of the day and only when Gloria is in a specific park.  It isn’t long before she realizes she may be the monster.  Gloria must decide how to handle this strange circumstance, but outside forces that she has set into motion may have other plans.

I was completely engaged with how this film transpired.  Anne Hathaway had a lot to do with that.  If you have ever seen her in a dramatic role, you know she can pull it off well.  The depth to her performance is what drew me into the scenes.  Her costars, such as Jason Sudeikis and Tim Blake Nelson, also provided that emotional give and take that this film needed.  Sudeikis in particular had a range to his acting that I hadn’t seen from him before.  I could not predict what his character would do and that made it more exciting to watch.  The chemistry between Hathaway and Sudeikis is terrific and the very small cast as a whole is outstanding.

The premise is obviously unusual, but the main story itself is very relatable.  It takes the idea of a giant monster movie and brings it down to a human level by having the main character be an alcoholic who is trying to make her life better.  She stumbles at every turn and with each misstep brings darker and darker characters into her life.  Characters who have complex, emotional issues that rival her own.

It’s an interesting angle to see these two genres merged, psychological drama and giant monsters.  It reminded me of Melancholia and how the setting of a family coping with despair and inevitability merged with a sci-fi disaster film.  As someone who enjoys the spectacle and creativity of science fiction, but also the intimacy of character-driven independent films, I’m glad we are starting to see this best-of-both-worlds approach.  The strength of the writing in science fiction, once again, becomes an important component as a result.  When we put story and character above the special effects and action scenes, the audience reaps the rewards and the art form stays healthy.  It feels like a new frontier in filmmaking.

Speaking of special effects, I should mention that they are really well done in this movie.  I stated that story should come before all us, but, if possible, don’t skimp on good digital or practical effects.  As you can imagine, the monster looks amazing, and unique to anything I’ve seen before.  The editing and cinematography of the movie actually compliments the effects in a way and impacts the emotional intensity of some scenes.  I’m not saying this movie is full of these effects, but when they are used it’s a mesmerizing sight.

There are some things that didn’t quite work for me.  Austin Stowell plays Joel, someone that works for Oscar alongside Gloria.  His character makes some questionable decisions that don’t feel  authentic.  It took me out of certain moments and made me feel he was underwritten.  The film’s overall runtime could be trimmed by ten minutes or so.  Some of the plot points could have been structured better to improve the pacing.  Sometimes you feel like you are in the same eternal rut that Gloria finds herself in, which could be intentional.  I just feel the objective of getting to know Gloria and how her ordeal unfolds should have happened faster.

Colossal is a special kind of film that touches on different cinematic elements.  The character study of Gloria is one element and the giant monster in South Korea is another.  Anne Hathaway’s interactions with almost all the characters yields intriguing displays of human behavior and how it is affected by jealousy, substance abuse, and insecurity.  Jason Sudeikis is also a highlight for me and how his character evolves, or devolves, over time.  The monster scenes are a wonderful treat and do connect to Gloria’s story in a very cool way.  I recommend seeing this movie if you enjoy indie films about damaged people played by brilliant actors.  If you crave giant monsters, you get a good dose of it here as well.  You may learn some valuable life lessons about personal strength, self-confidence, self-destruction, and emotional manipulation along the way.  Let’s see a King Kong movie do that.

Synopsis: A woman discovers that severe catastrophic events are somehow connected to the mental breakdown from which she’s suffering.