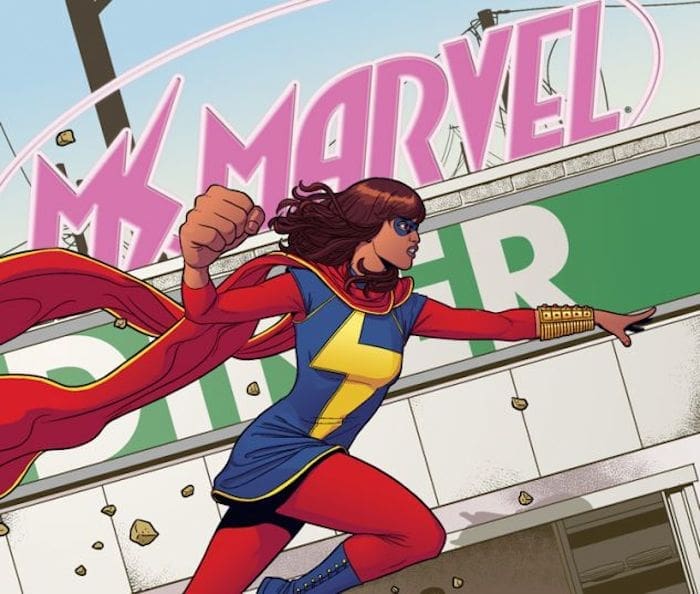 Unwinding his sprawling Batman “Zero Year” tale over the span of a year-and-a-half has allowed writer Scott Synder the opportunity to depict the gradual ascension of the character from rough-and-tumble novice to hardboiled crimefighter. Batman #31 is another step forward in Batman’s path to becoming Gotham’s Dark Knight, showcasing Batman and The Riddler matching wits in what is essentially one extended scene. In essence it’s the ticking clock element that creates the issue’s point of tension, though the involvement of several main characters during the issue is what gives the narrative its proper weight. Synder’s script remains strong throughout, only faltering in his choice of a flashback sequence that doesn’t have the effectiveness it’s reaching for. Flashbacks have been utilized so far in this event to showcase the important moments of Bruce’s life—his parents being killed and the effect that had on him in the months following—but this one—Bruce’s math teacher forcing him to solve a particularly tough riddle—feels too insignificant in comparison. On art, artist Greg Capullo, inker Danny Miki, and colorist FCO Plascencia all deserve equal credit for bringing a sense of dynamism to a relatively static issue. Capullo’s depictions of the Gotham citizens living in squalor under The Riddler’s rule are of particular note, as is his depiction of a badass dirt bike riding Batman flying onto the scene. Truly it’s difficult to pick something by this team of artists and colorists that isn’t magnificent.

Part of me has a great admiration for C.O.W.L. #1 co-writer Kyle Higgins, who has finally been able to put this idea that he’s had since 2005 to the page, and I wish the other part of me could hold the actual issue itself in similarly high regard. Unfortunately, the problem that C.O.W.L. #1 faces is that tosses the reader headfirst into such a grand narrative without much baring, a practice that works well under the right narrative, just not this one. C.O.W.L. has a relatively large cast of heroes at its disposal and all of them are introduced within the first few pages as an onslaught of multi-colored dialogue bubbles that make it difficult to discern the different personalities at play. To their credit, Higgins and fellow collaborator Alec Siegel include a helpful chart at the start of the issue that shows who each hero is and their position within the G-Man-esque league of superheroes known as the Chicago Organized Workers League (or C.O.W.L.), but following along by constantly flipping back to the front page is not ideal. Rod Reis’s painterly art style compliments the grittiness of the 1960s crime-ridden Chicago backdrop, but his lack of detail in the actual backgrounds is a real disappointment given the rich environment he has to work with. Reis’s art reminds me a lot of Ben Templesmith from 30 Days of Night, where the backgrounds of the barren Alaskan tundra could be represented in splashes of color. Here, however, I actually want to see a living, breathing city.

Advertised as the start of a series of “Original Sin” tie-in issues, Deadpool #19 is working with a lot of plot threads both new and old, but neither is represented particularly well, both narrative and artistically speaking. Deadpool’s current conflict with Dracula’s forces feels stagnant as this issue merely sets the stage for an eminent time-travel team-up that’s sure to be delightful…when it happens next month. As for the “Original Sin” connection, Deadpool learns that he might have sired a daughter (and has a typical Deadpool-esque response to the revelation) but how this correlates to Uatu the Watcher being murdered is left unanswered, at least for the time being. Whether or not writers Gerry Duggan and Brian Posehn planned for this aspect of Deadpool’s past to be revealed at this point in their current vampire-hunting arc is unclear since the two plots feel like separate entities at this point but I’m hoping they come together a bit more cohesively. Adding to Deadpool #19’s troublesome plotting is John Lucas’s art, which looks incredibly rushed and is hard to look at, to be quite frank. There have been good-looking issues of Deadpool in the past but this issue not one of them.

It’s apt that Ken Krekeler’s Dryspell #1 should begin with a quote from Alan Moore, the creator of Watchmen, because the tenor and tone of this debut issue resonates more closely to the superheroes of Moore’s universe than of traditional ones like DC or Marvel. At the heart of Krekeler’s script is Tom Ferris, a former superhero that now hides behind a desk job as a production artist for an advertising agency. While on the surface this setup is ripe for a Clark Kent/Superman analogy, Krekeler uses it as more of an intimate character study, demonstrating the hardships of being a hero who has zero privacy, gets punched in the face on a daily basis, and, in Tom’s case, is addicted to drugs. Tom’s confession to needing psychedelics in order to feel in the proper mindset to perform his heroic duties is where Dryspell #1 is at its most compelling. Just as attention grabbing is Krekeler’s art, which uses a combination of thick character outlines, a conservative color palette, and minimal detail to give the book a truly unique sense of style, again distancing itself from mainstream heroes. Where Dryspell #1 stumbles is how it draws out Tom’s longing to get back into the superhero scene, complete with an all-too-familiar sequence where Tom is given the opportunity but turns down the offer, and then goes home and changes his mind because quite frankly, it makes for a more interesting comic book that way. For Dryspell #1, the brief glimpses we get into Tom’s fall from grace are far more fascinating than his climb back up.

It’s unclear where Charles Soule’s new series, Inhuman, stands amongst Marvel’s priorities as promotion for their forthcoming sprawling summer event (titled “Axis”) begins while their ongoing “Original Sin” event begins to spill over into other books across the line (including this week’s Deadpool #29). While Inhuman #2 doesn’t demonstrate the kind of hyperbolic “things will be changed forever” mantra that is associated with those other Marvel events, it does offer significant world building within its script. This second issue surpasses the first in nearly every aspect, including a larger albeit still very narrowed scope on what has happened in the Marvel Universe since the Inhuman’s floating city of Attilan fell. Soule is still honed in on Dante, the newest “Nuhuman,” and his struggles with accepting his seemingly unalterable state. One conversation between Dante and his Inhuman guide/trainer/tough love administrator Gorgon reveals more about Dante than the first issue was able to provide, and makes me instantly appreciate Gorgon for wanting to have Slayer play at every wedding. But the issue primarily focuses on a temporary collaboration between Queen Medusa and Captain America, the former still coping with the loss of her husband, Black Bolt, and her city and the latter attempting to help clean up the mess and move forward. Joe Madureira’s art remains a significant draw of Inhuman, with his rendering of an action sequence involving Medusa using her hair in a most surprising manner being the standout of this issue. My only hope for the series moving forward is that Soule begins to introduce more Nuhumans, which could eventually turn Inhuman into the next great team book.

Kamala Khan has been searching for her own identity ever since this relaunched Ms. Marvel series began and in issue #4, she finds not only an identity but a potential first nemesis as well. Not to mention she finally has some semblance of a costume she can now call her own, but in retaining the charm this series has possessed from the first issue, the new Ms. Marvel goes out on her first real superhero mission wearing a burkini. It’s this kind of lighthearted and personal touch that series writer G. Willow Wilson brings to the page, defining Kamala as one of the most endearing characters since Stan Lee created Peter Parker. There’s a lot of Spider-Man to be found in this new Ms. Marvel (not literally of course, though that would be awesome), particularly in this issue when the recently grounded Kamala must break out of her room and rescue a friend’s brother from a dangerous scenario. It’s that balance between Kamala wanting to be a better hero but also wanting to be a normal teenager that Wilson hits upon so well in each outing. Kamala’s strange powers that allow her body to grow and shrink at the most inopportune moments not only capture the awkwardness of teenage growth but are also the perfect excuse for Adrian Alphona’s surrealistic approach to the art. If there were ever a comic deserving of all the attention Ms. Marvel has garnered in its limited run so far, it’s this one.