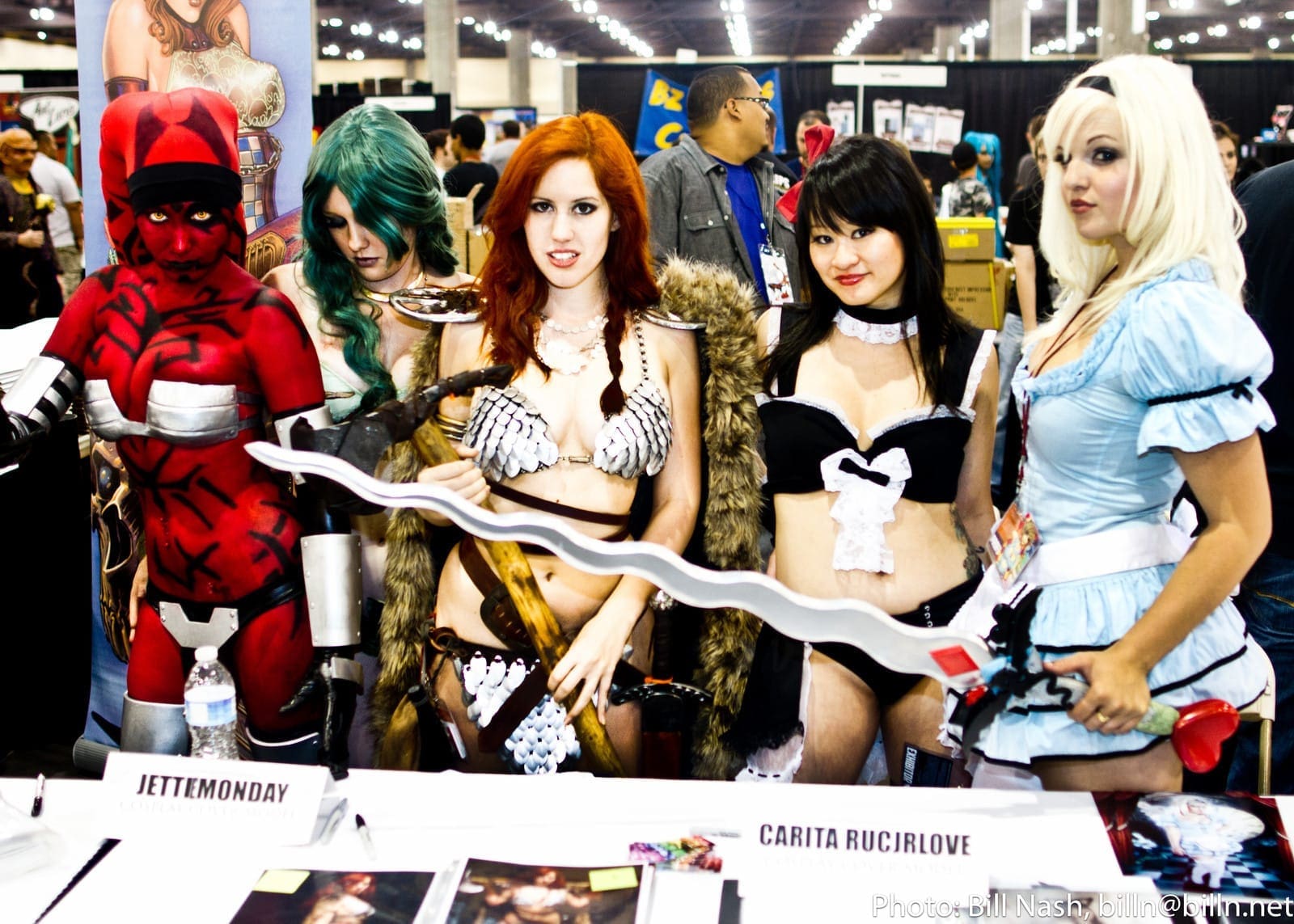 I was recently sent this message by the lovely Ms. Melissa: “I’m looking to get into cosplay. Do you have any info on how I can get started? Thanks so much in advance. I appreciate any help, tips, or suggestions you can offer.”

Well, my darling Melissa, have I got a treat for you! A HUGE post dedicated to those aspiring to be awesome cosplayers! This is just a beginner’s crash course, so if you’re looking for something a little more advanced, stay tuned for Part 2 (coming soon). But for now, there’s a lot of material to go over, so let’s get to it!

Obviously, you have to start somewhere, and as a cosplayer this usually means a character. Well, more precisely, “a character *idea*”. Someone somewhere has an idea for a character to dress as. Either you do, an awesome concept artist online does, or even a friend of yours does. Whoever it is, give them credit! Once the costume is finished, make sure to tell people where the idea came from! Obviously this character can be anything from a mainstream comic book character, a lesser-known manga character, even a character you created all yourself!

Examples: “I just really love Spider-Man, so dressing as Mary Jane Watson wasn’t too much of a stretch for this Spidey-loving, red-headed model!” or “My friend said he knew how to make scale mail, and I’ve always wanted an excuse to be a badass warrior chick, so Red Sonja it was!” or even “I’m a busty gal and knew that I wanted to do something iconic, but not too over-played, and when my friend suggested Power Girl I knew it was destiny!” You get the point.

Once you’ve got an idea down, now it’s all about execution. Are you going to dress as Adam Hughes’ version of Zatanna? Or maybe a Steampunk White Rabbit from Alice in Wonderland? Find an image of the character that you love and run with it. (PRO TIP: Try adding your own spin on an existing image that makes it more personal to you or shows off some of your special skills!)

Okay, you’ve got a Character, now it’s on to the Costume itself!

Get a design. Either draw one up yourself or copy from an existing one. Have fun with it either way! You’re dressing up as a character, just like a 5 year old on Halloween. Why not have as much fun with it as you can?

Personally, I tend to stick closely with the character’s look as possible so that I can make sure people know who I am. I’m a sucker for people recognizing my character right away! Try to find the pieces of the costume that make that character iconic. Where would a Power Girl cosplayer be without her signature chest logo? Poison Ivy’s got her leaves, Wonder Woman’s got her cuffs and tiara, Captain America has his shield (see: props). Find that part of the costume that speaks to you and run with it.

Do you sew? If you don’t, you’re gonna have to either A) learn or B) find someone who does! Local seamstresses and costume makers are easy enough to find online through other cosplayers. If you like someone’s costume, ask them if they made it. Either they’ll tell you they did or someone they know did, or that they bought it (even online, someone had to make it somewhere!).

This is a great time to stop for a second and let you know to THINK OUTSIDE THE BOX! My Power Girl suit is a dance leotard, slightly altered. My Zatanna coat with tails is a piece I bought from a cheap Halloween costume (still not my favorite, but it works well enough for how quickly I needed it!). Heck, half of my White Rabbit costume is from an old barmaid costume I bought 5 years ago! Think outside the box. Try to imagine one item in as many possibilities as you can.

Okay, so you’ve got your suit, you’re done, right? No way! We still need to talk Makeup, Props, and Posing!

Makeup goes beyond just eye-shadow and lipstick. Obviously, if your character wears a mask, wear a mask! I also consider wigs part of the makeup step because that’s the order in how I get ready myself (tie hair up, wig cap, makeup on face, wig on head). Look at your character and try to think how they would look in real life. This is open to some interpretation obviously. For Red Sonja, I did dark, heavy eye shadow to really make my eyes seem more intense and less… smiley. Others may argue that Sonja wouldn’t have worn makeup at all and gone out clean-faced. Neither is wrong. They’re just different interpretations of the same character. Which is half the fun, honestly! 🙂

Props are also a BIG part in some costumes. Depending on whether you’re cosplaying for a photo or for a convention, there will be different restrictions on what you can and can’t have with you. Where would Sonja be without a sword? Or Cap’ without his shield. Some characters just need a prop with them. Plus, props can be a ton of fun. It was a blast taking photos with little kids and letting them hold my axe.

Now this is a good time to link back to my other article and give the other side of the story on props. Some people spend a lot of time, money, and/or effort on having good props. Some authentic. Some even fragile. While I suggest against bringing any real memorabilia or anything too valuable to a convention, I can understand the allure of showing off your toys to all the other nerds who can appreciate it. If this is the case, do not let people touch it! If you’re worried about something, just let people know. They know you worked hard on your costume and they don’t want to ruin it before the next fan can get his shot with you too, so just let them know! “Actually, the sword is a little delicate, but take a look at the cape I made.”

Now, to Posing!!! You’re all done up and ready to hit the town! Most likely, you’re somewhere where your photo is bound to be taken. It’s always fun to pick out a few good poses that your character does so that your photos look more like the character. While the Victory/peace sign might be great for some anime characters, I doubt Sonja would be caught dead flashing it. And while Power Girl can be very serious at times, if she’s out and about, odds are she’s generally pretty happy to be with everyone else, so it’s okay to be a little smiley.

Don’t be afraid to ask other costumers (like Melissa!). Once you’re more comfortable in the cosplay community, it’s also easier to find things online (from costume tutorials to wig shops).

tl; dr – Be creative, think outside the box, ask questions, HAVE FUN!

Rainy Days and Cosplays: An Interview with Kayla of Cosplay By Kayla