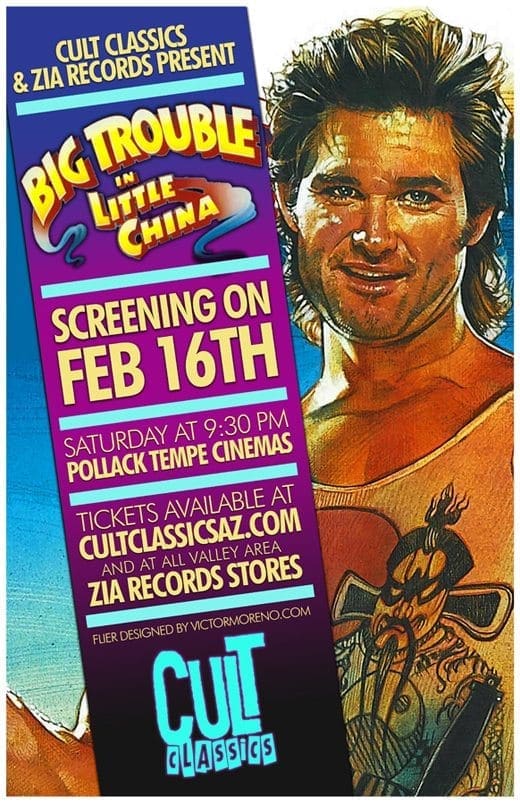 Cult Classics, Phoenix, Arizona’s popular repertory film series is back in February with one of our favorite cult films from director John Carpenter!

“This is Jack Burton on The Pork-Chop Express …” and you should be excited to go into a crazy adventure in 1980′s San Francisco Chinatown when Cult Classics presents John Carpenter’s 1986 cult classic BIG TROUBLE IN LITTLE CHINA back on the big screen in Tempe, Arizona!

Kurt Russell stars in this homage to comedic 1930′s action serials and kung fu movies. When trucker Jack Burton agreed to take his friend Wang Chi to pick up his fiancée at the airport, he never expected to get involved in a supernatural battle between good and evil. Wang’s fiancee has emerald-green eyes, which make her a perfect target for an immortal sorcerer named Lo Pan and his three invincible cronies. Lo Pan must marry a girl with green eyes so he can regain his physical form. Now, Jack must save Wang’s fiancee from Lo Pan and his henchmen, and win back his stolen truck. But how can he defeat an enemy who has no body? Tickets for the film are at $11. We’ll also have a selection of VIP Tickets especially for this movie, including our first T-SHIRT VIP Package!