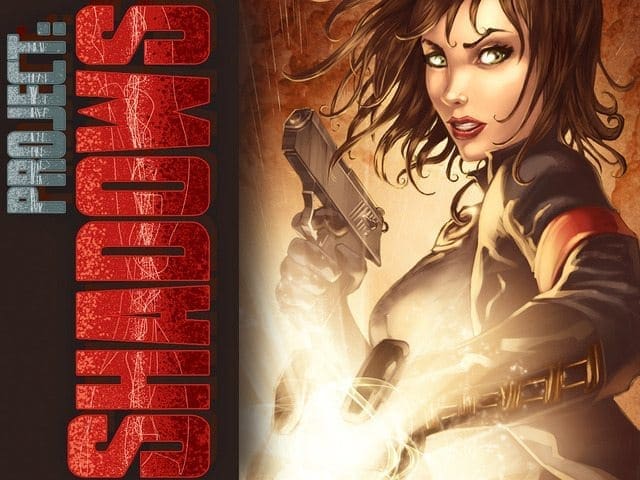 If you have an idea and a little marketing savvy, websites like Kickstarter can help you raise the capital needed to turn your idea into a reality. Though not all projects receive the amount of support needed to become a success, fan donations were not a problem for artist Alfred Trujillo and his crew at 183 Degree Studio. In less than one day, “Project: Shadows,” a long-time endeavor conceived by Trujillo ten years ago, exceeded its $3,000.00 launch goal. “Project: Shadows” is a graphic novel that follows female heroine and protagonist Samantha through a world of intrigue and mystery.

“In a dark future Samantha is on the run from a government out to abuse her powers. Now, only she and her friends can save the world.”

“Project: Shadows” has been under development for over a decade, morphing and transforming in many ways before Trujillo and his team finally allowed the ink to dry. Trujillo has been the father and mastermind behind the story and production.

“Over the ten years I’ve worked on ‘Project: Shadows,’ I’ve gained insight and experience into storytelling and art. The main idea behind ‘Project: Shadows’ is a lesson that seems to keep getting forgotten throughout history, which is that evil triumphs when good people do nothing. With this in mind, the objective of ‘Project: Shadows’ is to get people to see that they do, in fact, make a difference and have an impact in the world. I want to take this story and inspire people, get them involved and standing up for what is right and for what they are passionate about. Lofty, I know, but I gotta do what I gotta do.” Cara Nicole (also known as AZ Powergirl), Milen Parvanov, and Brian Augustyn of 183 Degree Studio have all put forth great effort to make “Project: Shadows” possible. The $3,000.00 raised will fund the initial print run, covering costs for the first three issues. Copies will be distributed via comic book stores, conventions, and online. The $3,000.00 is just a starting point and Trujillo is looking forward to a long run.

“I hope that ‘Project: Shadows’ can grow into fifty issues and become an ongoing, monthly thing.”

When asked how he felt about the immediate positive fan response to “Project: Shadows,” on Kickstarter, Trujillo was gracious and spoke of his surprise.

“I appreciate everyone’s support. It is both exciting and powerful to be able to create something worthwhile that I can spread to a larger audience. ‘Project: Shadows’ is going to be an epic, character-driven ride with twists and turns. It’s not just about superheroes, it’s about ‘awakening’ to what is really going on in the world. It is exciting to finally be able to act on something I’ve cared so much about.”

Even though “Project: Shadows” has exceeded its initial $3,000.00 benchmark (over $4,500.00 donated by 106 backers at the time this article was written), you can still contribute via Kickstarter and fund further issues, as well as receive some awesome memorabilia as thanks from 183 Degree Studio.

Nicole and Trujillo are guests at Denver Comic Con in Colorado May 31st – June 2nd.

PLANTS VS. ZOMBIES COMICS ARE BACK FOR THE BRAINS!