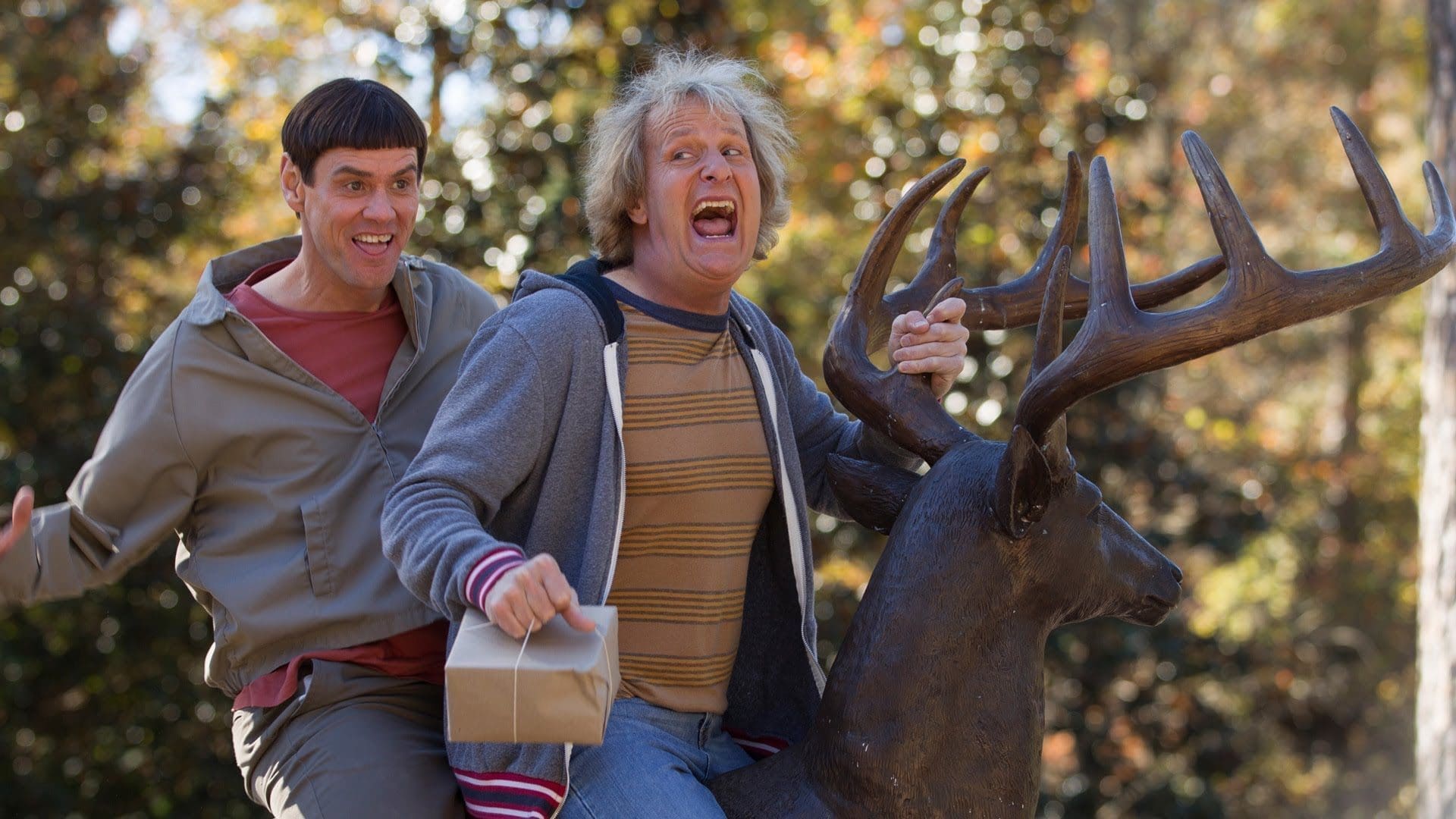 It’s safe to say that a sequel to a successful comedy twenty years ago is not going to reach iconic levels of hilarious, but it doesn’t hurt to try.  Given the results of the abysmal prequel the studio churned out a decade ago, one can assume that if the original directors reunited the original actors that made Dumb and Dumber so memorable, a semblance of its former glory would rise from the ashes in some shape or form.  The notes from the same sheet music are all recognizable.  It just doesn’t hit them as beautifully.  Still it’s nice to see Harry and Lloyd mixing things up again.

In Dumb and Dumber To, Harry(Jeff Daniels) tells Lloyd(Jim Carrey) that he needs a kidney transplant.  Unable to locate a donor, he stumbles upon a postcard left at his parents’ house from an old flame informing him of a daughter he had over twenty years ago.  Lloyd convinces Harry to seek out his daughter and convince her to donate her kidney, which brings about the obvious road trip.  What follows is a series of sight gags and one-liners that are hit or miss and only serve to give Harry and Lloyd the ability to showcase their skewed view of the world in slapstick fashion.

I’ll get to whether the jokes worked in this movie in a minute.  I wanted to first mention the dedication that Jim Carrey and Jeff Daniels put into bringing their old characters back to life.  It’s like they never left them far behind.  There is a little less spastic humor from Carrey, but he still delivers his lines with great energy.  Daniels is an Emmy award-winning actor now and can still pull off Harry without missing a beat.  The chemistry between these two is excellent.  If that’s all it took to make this movie work, we’d be on the floors.

The story of the movie is almost a carbon copy of the original with some murderous couple looking to kill Harry and Lloyd when they least expect it since they stumbled upon a plan to cash in on someone’s fortune.  Be that as it may, it gets these two buffoons where we need them.  Together and stumbling through one predicament after another.  The interesting addition to the movie is Harry’s daughter Penny who it turns out shares the same charming, yet dim-witted personality.  Her adopted father is a world-renowned genius and has sent her off to a conference of geniuses in El Paso to give a speech in his place.  After some ridiculous banter at her father’s house, Harry and Lloyd make their way to El Paso to seek out Penny.

It’s best to avoid going into great detail about any one gag or joke in the movie so as not to spoil the spontaneity, but you can be assured there are some laugh-out-loud moments and a good deal in the trailer.  Particularly at the conference and also during the very long road trip.  Some of the scenes are over the top and don’t really pan out as the Farrelly Brothers might have hoped.  Outside of a drug trip, using CGI in a comedy is a risky maneuver and I don’t feel works well in this kind of lowbrow down to earth story.  What does work is the interactions between Harry and Lloyd and anyone who thinks these two can carry on an intellectual conversation.  Just like the first movie, Harry manages to come off much more capable of hiding his ignorance in public than Lloyd ever could.  Mistaken for Penny’s father, he ends up judging a young inventors contest.  His input is amusing to the audience and bewildering to the participants, but somehow they never suspect he isn’t a brilliant scientist.

The best compliment I can give this sequel is that it reaches for the spirit of the original and nearly achieves great success, but falls on too many disgusting sight gags better left to another Jackass movie.  While Dumb and Dumber had it’s share of gross humor, it was built up for one big memorable bathroom scene.  The rest were more subtle in their execution like the beer bottles in the van.  The Farrelly Brothers haven’t had a resounding hit since There’s Something About Mary.  The new generation of comedy has found better success in the hands of Lord and Miller, Seth Rogen and Jonah Hill, and Judd Apatow.  Perhaps some collaboration with any of these funny writers might have given the script a breathe of fresh air.

I won’t discourage you from seeing Dumb and Dumber To because I still believe Carrey and Daniels give terrific performances that are on par with their much younger selves.  The supporting characters, while not well developed, are fine too.  The many callbacks to the original get old after a while, but fortunately there are several new jokes that round out the movie nicely.  The movie just goes from sophomore to grade school humor too many times.  In short it was an uphill battle to make a funny movie that complimented its predecessor.  Dumb and Dumber left big shoes to fill and thankfully Dumb and Dumber To filled one of them.

About Dumb and Dumber To

Synopsis: 20 years since their first adventure, Harry finds out he has a daughter who was adopted. Lloyd and Harry try to find Harry’s adopted daughter.