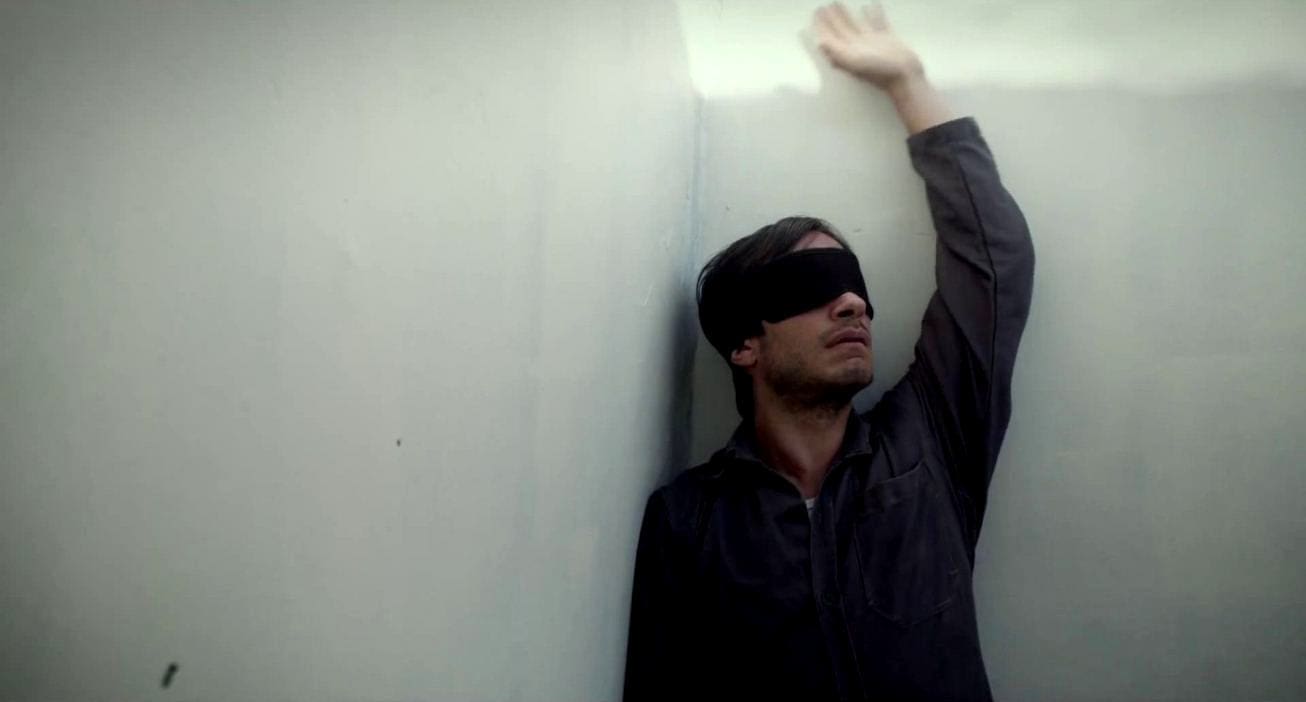 Jon Stewart took time off from his work on The Daily Show to tackle a project he was passionate about.  It’s pretty ambitious to start your filmmaking career with a serious subject like the current Iranian revolution.  Fortunately the style of subtle humor and satire you’d recognize from his television show translates well to this adaptation of one man’s true story about imprisonment and torture.

In the film Rosewater, Maziar Bahari(Gael Garcia Bernal) is a journalist working for Newsweek and living in England with his expectant wife Paola(Claire Foy).  He is sent to Iran to document the events leading up to the Iranian presidential elections of 2009.  While there he meets a cab driver named Davood who later becomes his chauffeur around town.  Maziar’s mother Moloojoon(Shohreh Aghdashloo) puts him up in his old room at her place for the duration of his stay.  While he begins interviewing supporters of the current president, Davood introduces Maziar to several protesters voting for the challenger.  Information in Iran is tightly controlled and any news from foreign press about Iran is dismissed as manipulative falsehoods designed to undermine the integrity of the country.  Davood and his fellow protesters hope to offer a counter argument and also provide Iranian people with ideas from the rest of the world.  As the election takes place, and despite overwhelming popularity for the challenger, the incumbent president wins, sparking cries of corruption. Attempts by the regime to quell the unrest fail and massive demonstrations take place leading to violent confrontations.  Maziar provides a window for the whole world to see this unfold and, in that exposure, puts himself in the spotlight by accident.  The government later detains him for being a spy and he spends four months in isolation from his family and friends.

The reality of Maziar’s predicament is surreal in the fact that he not only has to confess to something he is grossly unqualified at, but also has to answer absurd questions by his interrogators such as his business relationships, trips to New Jersey, and women’s phone numbers on his cell.  While the pace of the film lags somewhat a third of the way in when the imprisonment begins, what really gives the movie a lift is Gael Garcia Bernal’s portrayal of Maziar.  His upbeat, cordial attitude infused each scene with a balance of light and dark emotional tones.  Not that it was a cake walk for him while inside.   Maziar had no connection to the outside world in his cell or the interrogation room and had to rely on his own strength to keep from collapsing mentally.  He wears a blindfold for most of his stay and suffers disorientation, sleep deprivation, and eventually beatings later on.  What keeps him safe for the time being is the government’s hope to use him on film and broadcast his confession to Iran that he was sent by the U.S. to destroy their government.  What also helped him remain sane were his conversations with his deceased father and sister, who also protested their government decades earlier and were imprisoned for their convictions.  His sister later appears in a memory, telling him to experience the world and everything in it while she is away. His father Baba(Haluk Bilginer) provides the levity and distraction he needs as he endures each day.  He also reminds Maziar of how strong he truly is and the power he possesses over his captors.

Although the movie was uneven overall, Bernal’s performance carries it along nicely.  Especially with his conversations in the interrogation room.  In fact the interrogation scenes often times were the most enjoyable and humorous.  My favorite moment in fact is when Maziar begins laughing when he realizes he isn’t alone and the world is actively trying to save him.  He understands at that moment that the Iranian government can’t risk turning him into a martyr and what a futile situation the interrogators are now in.

I recommend Rosewater for the historical significance, which still continues, but also Gael Garcia Bernal’s performance.  You could also read the book this is based on co-written by Aimee Molloy called Then They Came For Me.  I’m sure there are probably more harrowing details that didn’t end up in the movie, but the important thing to remember is the blind optimism Maziar showed his captor’s and how he overcame their bizarre questioning and mental torment.  He now actively advocates for the protection of all journalists risking their lives to deliver important information to the world and seeks to have anyone detained because of that honorable mission released.  I could only imagine being in a similar situation, but blind optimism is something I am all too familiar with and often apply to the stressful times in my life. Rosewater reminds us that no matter what the world throws our way, we should always search for that positive outlook and dance the rest off as best we can.  Not the easiest sentiment to live by, but it’s a good start.

Synopsis: A journalist is detained in Iran for more than 100 days and brutally interrogated in prison.

Writer: Jon Stewart (screenplay) Based on the book “Then They Came For Me” by Maziar Bahari and Aimee Molloy