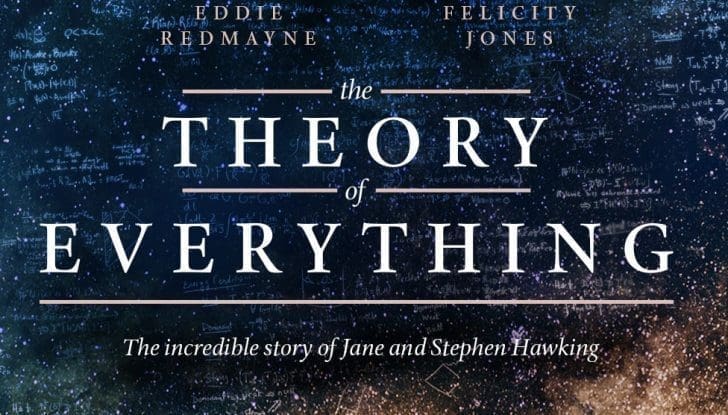 The Theory of Everything is a movie about the life of one of the most famous physicists in the world, Stephen Hawking. However, it may not play out the way most would likely expect it to. That doesn’t mean it’s a bad movie, as the real Stephen Hawking stated that it was like watching himself throughout much of the movie. So if the movie is good, then what’s the problem?

When you think of a film about the life of Stephen Hawking, your first thought is most-likely about the science behind his vast knowledge of physics. Even the trailers for the film show off the science alongside Hawking’s struggle with motor neuron disease, so you expect the two main beats of the film to follow that line of thinking. In reality, this is primarily a story of Hawking and his first wife, and their struggle with motor neuron disease throughout his life.

The only science you really get is toward the beginning of the film when Hawking is still a student at Cambridge. The lack of science throughout the film is not a significant issue so long as you know what you’re getting into when you head to the theater. This is a love story and the struggle of a phenomenal human being, not a dramatized science class.

Felicity Jones plays Jane Hawking, the college romance and eventual first wife of Stephen Hawking. Her interactions with Redmayne are brutally convincing. You feel all of her struggles, all of her triumphs and her impressive strength. She is the backbone of the inspirational story that plays out in the film. The performances of Redmayne and Jones make this film.

There are solid performances by many of the supporting actors, namely Harry Lloyd as Stephen’s best friend Brian, and David Thewlis as Dennis Sciama, Hawking’s first professor at Cambridge. You don’t see much of these two, especially after the first act of the film, but they provide important supporting roles that help show Hawking’s evolution as a person and his struggles in life.

The Theory of Everything is a very good movie, but it may not be the movie you’re expecting. If you’re okay with an inspirational story mixed with varying degrees of a love story, you should be very pleased with The Theory of Everything. If you’re looking for something a bit more science-oriented, you may be disappointed in the film. Focus Features probably should have marketed the film a little better to help potential audiences understand more of what the film is about, but that doesn’t take away from the fact that this is a very good film.

About The Theory of Everything

Synopsis: A look at the relationship between the famous physicist Stephen Hawking and his wife.