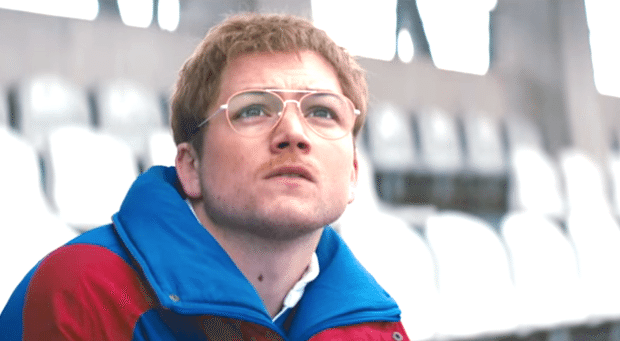 If you haven’t seen Cool Runnings, you are missing out on one of the best underdog films.  A Jamaican bobsled team competing in the winter Olympics without any prior competitive experience.  It’s fun, heartwarming, and leaves you overjoyed from seeing such an inspiring display of human spirit.  Well it just so happens that another champion of the human spirit was in attendance at those same Olympics, but he had his heart set on a different sport.

In Eddie The Eagle, directed by Dexter Fletcher, Eddie Edwards (Taron Egerton) is a young man with only one dream, to be an Olympian.  At his home in 1970’s England, he would be in awe at the athletes and their remarkable feats in the Summer Olympics.  Eddie’s heart and ambition is far superior to his talent and ability, but he would do anything to make his dream a reality.  After many years of setbacks and a few broken pairs of glasses, Eddie discovers his love for skiing and eventually ski jumping.  Without any money in his pockets, he ventures to Germany to train as a professional ski jumper.  It is here he meets Bronson Peary (Hugh Jackman), the groundskeeper of the ski facility and, it turns out, a former ski jumping champion as well.  With the reluctant help of Bronson, Eddie makes the dangerous journey into a very unforgiving sport.  If everything goes as planned, he hopes to qualify for the 1988 Winter Olympics.  The reasons for why an untrained athlete could make his way into the Olympics are explained in the film, but I won’t spoil them for you since they actually are a fun part of the plot.  Needless to say within a year Eddie Edwards would come to be known by many as Eddie The Eagle.

I’m not exaggerating when I tell you how entertaining this movie really is.  Not only is this an uplifting, underdog story, it’s also an homage to old-school 80’s sports movies.  The music, the clothes, the hit songs, and the energy all bring you back to that decade in an exciting way.  It’s got a fair amount of hilarious moments, but it never gets too campy or lose that emotional center.  It also makes you love ski jumping, but never want to try it.  It looks amazing when you stick a landing and utterly horrific when you don’t.

The main factor that really makes this movie shine is Taron Egerton.  His transformation into Eddie is remarkable and there isn’t any hint of his character in Kingsman.  When Eddie shows excitement for ski jumping, you feel it.  When he struggles to improve, you couldn’t be more disheartened.  Yet no matter how insurmountable the goal appears, you have faith in Eddie to see it through to the end.  Sure the outcome is pretty much a given, but how far will he go and what is it that makes him such a star?  There’s so much spirit in Eddie and Taron Egerton portrays this real-life Englishman with zeal and admiration.

The other half of this movie is Wolverine himself, Hugh Jackman.  Honestly this movie is outstanding with just Egerton, but to have Jackman as the coach makes the scenes even stronger and the interactions between Eddie and Bronson are a lot of fun.  Bronson is a former Olympian who suffers the guilt of never reaching his true potential, or so his old coach (Christopher Walken) would suggest.  Instead of appreciating his previous victories, he spends his life drinking and keeping the ski training facility tidy.  Fortunately his chance encounter with a new, young protegé awakens that athletic spirit in him.  Jackman does a brilliant job throughout.

There’s so much to love about this movie and it doesn’t take itself for granted.  Each scene feels important and carries weight into the next one.  I looked forward to seeing Eddie in competition, but the training sessions were equally rewarding.  The soundtrack compliments those huge, adrenaline-filled moments and brings you to the edge of your seat.  You’ll find yourself cheering along with the crowd in the movie.  Eddie Edwards is the true example of what it means to be an Olympian and you couldn’t hope for a better person to represent your country.

Eddie The Eagle is already one of my favorite movies this year; and, even if you know the whole story of Eddie Edwards and how it all plays out, you will be enormously entertained.  The performances are wonderful and the great 80’s atmosphere is terrific.  Taron Egerton is a versatile actor and it excites me to see what other projects he has coming his way.  If I made a mild criticism of the film, and it’s very mild, the movie is a biopic and it doesn’t come off that way.  It’s played much more lightheartedly than you would expect from a true story so you’re not quite sure if the actual people being portrayed are represented sincerely.  Overall though it’s a compelling movie and pulls you in from the first shot to the last.  I highly recommended watching this, enjoying all the 80’s references you can find, and seeing just how amazing one man can be when the world tells him no.

About Eddie The Eagle

Synopsis: The story of Eddie Edwards, the notoriously tenacious British underdog ski jumper who charmed the world at the 1988 Winter Olympics.