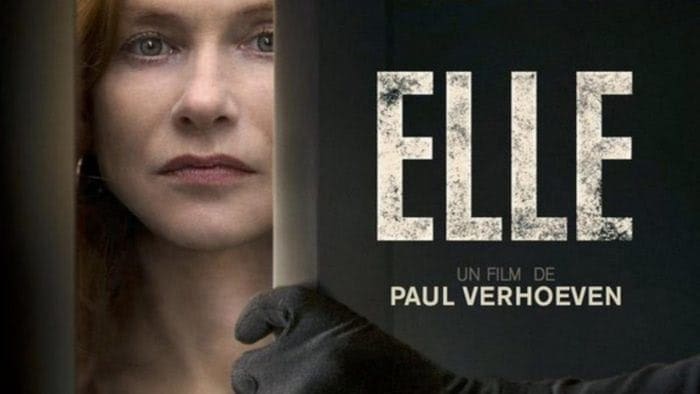 Reviewer’s Note: I have worked to make this a spoiler free review, but if you are interested in the version with spoilers, please let me know.

Real life is messy.  People don’t always react the way you think, or wish they would, especially in the wake of traumatic experiences.  I was discussing the movie Elle with some other reviewers and one of them said that this film is a mess.  It is.  It is a glorious mess, and I’m not sure how it would clean up, but that’s why this movie worked so well for me.

Elle stars Isabelle Huppert as Michèle Leblanc, a hard working owner of a computer game software company, and the film opens with what we later find out is her being raped in her home.  It is initially not evident that’s what’s happening, and the film progresses from start to end by revealing layers and revealing things that were in the background, or were hinted at earlier.

Michèle is a very strong willed woman, if a bit cold, and her reasons for being that way are laid out as the film unfolds.  We find out early that her family is well known, but not liked, though the reason isn’t revealed until later in the narrative.  When we learn that Michèle’s father brutally murdered many families, and how Michèle herself was involved in that event, it does explain some of her personality.  The more questions that are answered, however, lead to make the viewer wonder about things that had already occurred.  As I mentioned earlier, this is a messy movie, and the more you examine it, the more off a mess it can be seen to be.

Directed by Paul Verhoeven, who is known for movies with based upon psychological tension, Elle presents us with a lead character who exhibits many traits of having lived through a stressful life, and dealing with traumatic situations.  Isabelle Huppert does a riveting job in her portrayal of Michèle, and leads her character through some morally questionable choices, as well as some seemingly illogical ones.  Perhaps it is my background in working in behavioral health which gave me another angel to viewing this movie, and which caused it to be less confusing to me.  As I stated above, some other reviewers were commenting that the “mess” this movie was for them, and they mentioned that people shouldn’t make some of the choices that Michèle did, or act in some of the ways that she does.  To the contrary, those types of limited value coping mechanisms are prevalent in those who have had traumatic events happen in their lives, or, have elad lives in which they did not get their emotional needs met as they developed.  Most personality disorders are based on behaviors which meet those needs, though in a limited and unhealthy fashion.  With that in mind, Elle is a very good case study in developmental psychology.

Elle is also a good psychological tale, in that, even while knowing that you are being led to suspicion of the wrong person, you still get caught up in the chase that Michèle is involved in to find her assailant.  Further evidence of the chain of broken people is seen in the relationships that Michèle has with others.  Being emotionally stunted herself, she has raised a son, Vincent (Played by Jonas Bloquet.) who is also an emotionally immature young man, and who is oblivious to the ways in which the women in his life manipulate him.  Michèle has somehow managed to maintain a relationship with her ex-husband Richard Leblanc, (Played by Charles Berling) though even that relationship is a difficult one for people with traditional relationships to understand.

Beginning with Isabelle Huppert, the entire cast does a great job in their performances, and there is a very realistic flow to their portrayals.  One might not understand why a character is doing what they are doing, but the viewer will believe that these characters feel the way the story is putting forth.  The emotions are evocative, and, in one way or another, the audience will be pulled along in a strong current of the performances.

I walked out of the movie with my mind reeling, and trying to work through all that I had seen.  I wanted to go and see it a second time, while it was fresh, to see if dots had been connected by the film, or if I had done so in my head.  And, as the film had been pulling back layers of information, I wondered if things were there, but not apparent until more information was revealed.  For example, which event triggered other events, and did an event which seemed to be an initiating one, actually fall in a line of events, and was really an ongoing thing.  This is difficult to explain, yet remain spoiler free, but it is an indication of the meticulous manner in which Verhoeven has crafted this film.

Whenever I review a movie, I ask myself a few questions: Why did I watch this film?  What was the purpose of this film?  And who would I recommend go see the film?  Elle left me wondering about these questions.  I had gone to this screening not knowing anything about the movie, so I didn’t have a preconceived idea of what was about to transpire.  It certainly isn’t in the nerdy/geeky genre of movies that I see for the site, nor was it a kids movie that I see through my job.  It’s in the neighborhood of psychological thriller, and it excels in that, but it is also an excellent foreign film, and one that I don’t think would be produced in the U.S..  Who I would recommend it to is, I think, the hardest question to answer here.  Some of the people who I would suggest this to will be put off by the sexual assault scenes, and some of the other graphic depictions that take place in the movie.  If you are interested in people and how they react to a life that you can’t fully imagine, this is a film for you.  If you enjoy great performances, this is a film for you.  If you enjoy a mental challenge, this film will provide that as well.  If you do go, I would love to hear your thoughts on this movie.

Synopsis: A successful businesswoman gets caught up in a game of cat and mouse as she tracks down the unknown man who raped her.

Writers: David Birke (screenplay), based on the novel by Philippe Djian

Beauty and the Beast | Movie Review